(Minghui.org) Today's news from China includes incidents of persecution that took place in 24 cities or counties in 12 provinces, where at least 45 practitioners were recently persecuted for their belief. 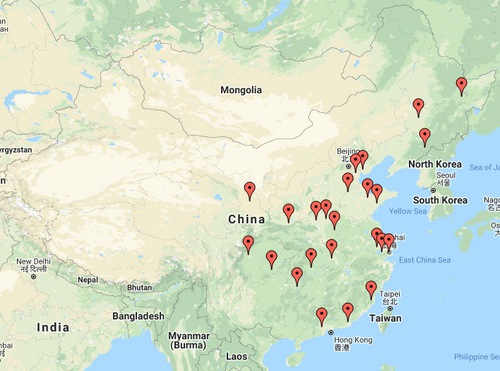 Mr. Jiang Quande and his wife Ms. Sun Xiuying were arrested by officers from the Gucheng Police Station on July 15, 2020.

Mr. Jiang was in poor health and was already emaciated. He was later brought home by family members and taken to the Changchun City Cancer Hospital. After returning home, he had to take infusion of nutrients to sustain his life. He passed away after years of persecution on August 26, 2020. He was only 66 years old.

Mr. Jiang was arrested many times. He spent 11 years in prison. He was displaced in 2017.

Ms. Sun has been held in the Changchun City No. 4 Detention Center. Before her husband Mr. Jiang passed away, their two sons demanded that the police release their mother to take care of their father. The Nong’an County Domestic Security officers refused their request and threatened them, saying that their mother could not be released unless she signed statements renouncing Falun Gong.

2. [Li County, Hunan Province] Mr. Tan Huidong on the Verge of Death when Released from Prison in 2018

Mr. Tan Huidong, 76, from Mengxi Town, was given a three-and-a-half-year prison term by Liu Aimin, a county court judge, in 2016. He was held in the Wangling Prison. When his prison term ended in 2018, Xiong Wenhua, deputy secretary of the Li County Political and Legal Affairs Committee, did not take him back home. He was tortured to the verge of death in the prison. He was dying. Prison officials strongly demanded that he be taken away, and the county officials finally took him home.

When his family saw him, he could not talk, he was incontinent, unable to stand or sit, and his life was in imminent danger.

Ms. Deng Meizhen, 78, was given a four-year-and-six-month prison term in August 2020 after being held in custody for five months.

Ms. Song Jianping was given a one-year-and-six-month prison term by the Tianning District Court on September 1, 2020.

Ms. Liu Aifang from Yanshi City, who was released on bail, was deceived into going to the Yanshi City Court on August 27, 2020.

Without any legal procedure, she was imprisoned and taken to the Luoyang City Prison for persecution.

Gao Junru, Party secretary of the Xuanzhuangsijie Village, and two other people broke into Ms. Dong Zhuying’s home on August 21, 2020. They forced Ms. Dong to sign the three statements, but she refused.

Two officers from the Huanggezhuang Town Police Station went to Ms. Zhang’s home on September 2. They wanted to videotape her, demanded to see her national ID card, and told her to sign the three statements, which she refused. Finally, the officers had her daughter-in-law sign the statements.

Ms. Shen Yinglan from Taicang City was arrested on August 28, 2020. It is not known where she is being held.

Deng called Ms. Cao on September 3 and told her to come to the community office. Ms. Cao went there. About ten people, including officers from the Fuxing Police Station and community staff members, forced her to sign and then read the “five statements” renouncing Falun Gong. They also photographed her.

Ms. Gao Jirong from Zhengji Town, Huaiyang District, was reported to the police for talking to people about Falun Gong. She was arrested at work on August 12, 2020. The police officers took her electric tricycle and ransacked her home.

Ms. Gao was taken to the Huaiyang District Police Department, and then to the Zhoukou City Detention Center. No family visits have been allowed.

Ms. Wang Li, in her 70s, was arrested by officers from the Zhangying Police Station at the Zhangying farmers market on the morning of September 4, 2020. Her home was ransacked.

Mr. Lei Zhengxia and his wife were arrested by officers from the Kaiyuanlu Police Station, Jinkai District, on September 4, 2020. Their current whereabouts are unknown.

Ms. Yu Wenhui from Hebei District has lost contact with other practitioners since the summer of 2019. No practitioner knows her current home address, her cell phone number or what her situation is.

Ms. Li Yaping and her sister Ms. Li Weiping were reported to the police for distributing Falun Gong materials on March 24, 2020. They were arrested by officers from the Yuefeng Police Station on March 29. Both practitioners were released on bail the following day after Ms. Li Weiping was extorted 4,000 yuan. The police held them in custody exceeding the maximum legal hours allowed by four hours.

After the sisters were released on bail, police officers and neighborhood committee personnel kept harassing them at home.

Ms. Li Weiping was taken to the Minqing County Detention Center by the Yuefeng Police Station on July 13. She was transferred to the Fuzhou City No. 2 Detention Center 14 days later. She was officially arrested by the Jin’an District Procuratorate on August 21.

Ms. Liu Junqin from Huangheya Town was arrested by officers from the No. 3 Team, Lingcheng District Police Department on the evening of March 23, 2020. She has been held in a detention center for six months, but her family members were not allowed to see her.

Leaders of Dagang No.1 Kindergarten in Binhai New Area found Mr. Gao Qingjian and harassed him on September 3, 2020. They forced him to write a guarantee statement promising not to practice Falun Gong. If he did not write it, he would be reported to higher authorities who would expel him from public office.

Ms. Chen Xiuling from Wenjia Residential Community went to Cangsheng Park with her child in early August 2020. She told people about Falun Gong in the park. A plainclothes officer, who pretended to ask for a booklet, followed her, arrested her, and took her to the Industrial Park Police Station.

Her home was ransacked and her Falun Gong materials and cell phone were confiscated. She was interrogated and told to sign paperwork, but she refused. The officers threatened her son and other family members. She was released that day.

Mr. Zhang Nanping was arrested at work by officers from the Luhui Police Station on July 21, 2020. He was taken to the Minhang District Detention Center the following day. He was officially arrested.

Officers from the Tongji Town Police Station and village officials went to Ms. Liu Shichun’s home twice and attempted to take photos in March and August 2020.

Ms. Chen Dechun, Changqing factory employee, was harassed by the police in August 2020.

Mr. Feng Chi was arrested on July 15, 2020. He is being held in the Dehui City Detention Center.

Mr. Chen Hongyuan was arrested at a practitioner’s home in Meidou Village by officers from the Rongcheng District Domestic Security Division and the Rongdong Police Station when they read the Falun Gong teachings on June 14, 2020.

His home was ransacked, and his computer and printer were confiscated. He was held in the Jieyang City Detention Center.

It was reported that he was beaten at the detention center. To protest these abuses, he has been on a hunger strike for some time. He is now very weak and was taken to the Jieyang City People's Hospital for treatment.

Officers from the Bohai Petroleum Police Station and neighborhood committee personnel in the Binhai New Area harassed Ms. Yang Daixiu and Ms. Chen over the phone or in person at their homes in recent days. They attempted to force the practitioners to sign the three statements document, but the practitioners refused.

Mr. Tang Changjun will be tried by the Wuhan City Intermediate Court on the afternoon of September 10, 2020.

Mr. Guo Baojun’s son received a notice from the lawyer on September 7, 2020, that his father's original verdict was upheld during the second trial. Mr. Guo was a resident of Erqi District.

Mr. Zhang Xiaogang was arrested as soon as he stepped out of practitioner Sun’s home by more than twelve people from the Shanshang Police Station, Erdaojiang District. They waited outside the door, at around 9 p.m. on August 12, 2020. Practitioner Sun is in his or her 70s.

Mr. Li and practitioners Liu and Sun were released on bail. Mr. Zhang was held in the Liuhe Detention Center. Ms. Wang was diagnosed with tuberculosis and was taken back to the police station. On August 14, she was re-examined and her illness was confirmed. She was released on bail and paid a deposit of 2,000 yuan.

Officers from the Lixin Police Station knocked on Ms. Feng Xiaocui’s door at around 8 p.m. on September 7, 2020. She refused to open the door.

The officers pried the door open, entered her home, and arrested her. They confiscated her Falun Dafa books. Ms. Feng was held in the police station that night.

Ms. Guo Lanjing and Ms. Ren Wanrong were arrested by Wang Chaobiao, head of the Pingchuan District Domestic Security Division, and other officers. Both practitioners were released on bail and paid 2,000 yuan. They were handed over to the local police station to be monitored by residential officers.

Ms. Wu Fangming was arrested by officers from the Tuanjie Police Station, Hecheng District on September 29, 2019. She has remained in custody.

Her case was brought to the Zhijiang County Court on August 25, 2020, by the Hecheng District Domestic Security Division.

“We Shouldn’t Be Attached to the Upcoming U.S. Election or Other Current Events”

“Falun Dafa Teaches Me to Be a Good Person”