France: Residents and Tourists Condemn the Persecution at Activities All Over Paris

(Minghui.org) To help residents and tourists in Paris learn about Falun Dafa, as well as the ongoing persecution in China, French practitioners routinely hold activities at the Eiffel Tower and other must-see tourist sites and in local communities every week. They demonstrate the exercises, hand out information about the spiritual practice, and let people know that it is being persecuted in China.

Lenny, who was on his motorcycle, stopped by and said he was pleased to see practitioners doing the exercises. He said he had just seen a similar activity in the Netherlands, where he talked with a practitioner and learned about the persecution. “The persecution is terrible,” Lenny said. “After all, meditation is just a way of calming the mind and improving health. The Chinese Communist Party (CCP) has no reason to ban it and I am glad to see it freely practiced here.” 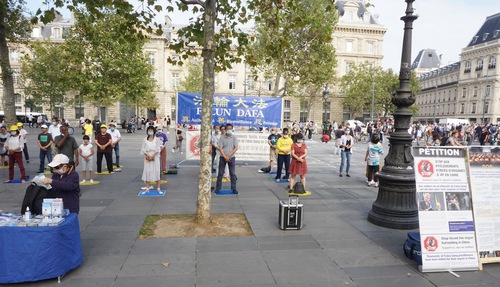 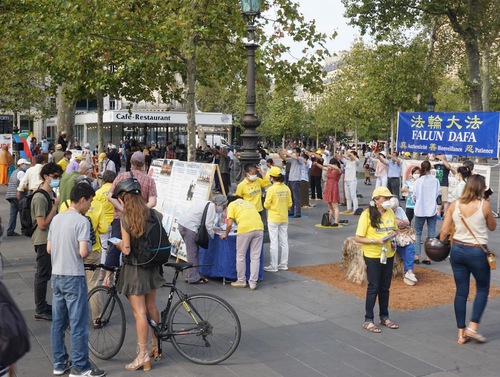 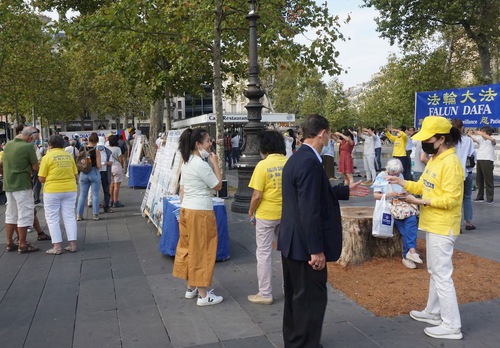 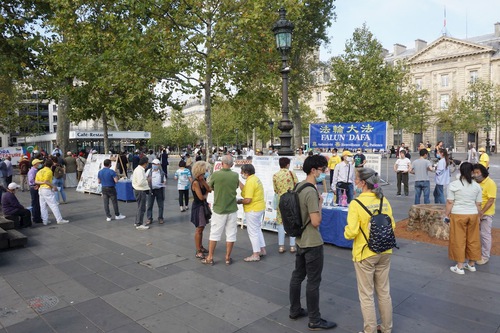 Candra, a freelance journalist for a news website, is also a human rights advocate. She videotaped the event and interviewed practitioners. She pointed out that China has the second-largest economy in the world, but that standing came at the cost of forced labor, organ harvesting, and environmental pollution. “Unfortunately, very few news media report on this, and many people are busy making deals with China while ignoring the totalitarian regime’s human rights violations,” she said.

She said that she would put the video on her website and share it with friends. “I heard that someone was denying the fact that the Tibetans and Uyghurs are being persecuted in China. Now I have evidence to show them these crimes are real. The CCP's tyrannical regime puts people in prisons, tortures them, and sells their organs for profit. We must say no to such brutality. When everyone opposes this, the situation will change.”

Yue, a Chinese resident in a local community, said she knew about Falun Dafa and that the CCP was horrible. Like many Chinese, she had joined the CCP’s Young Pioneers when she was a child. She decided to quit the organization. She also asked for a copy of Zhuan Falun, the main book of Falun Dafa's teachings. “I read part of it long ago. I think I will do better this time,” she said.

Belleville, which literally means “beautiful town,” is a neighborhood known as Paris's second Chinatown. Because the Chinese who lived there listened to the CCP's hate propaganda, many had misunderstandings about Falun Dafa. Some of the residents used to turn over the practitioners' booths and tables and even hit them.

Over the years, practitioners have continued to go there and talk to people. They also distributed copies of the Nine Commentaries on the Communist Party. The situation eventually improved and many people now understand the true situation. 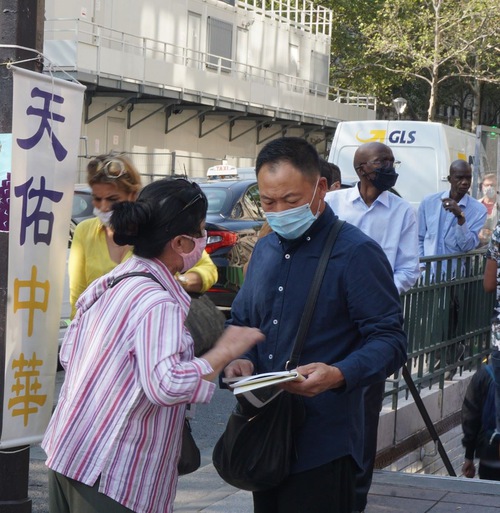 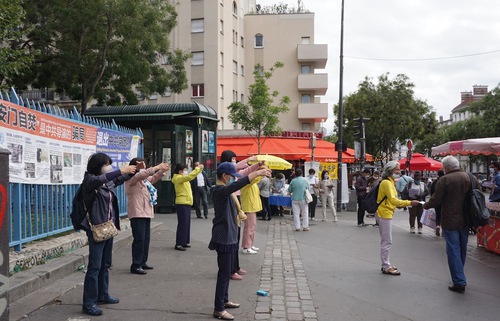 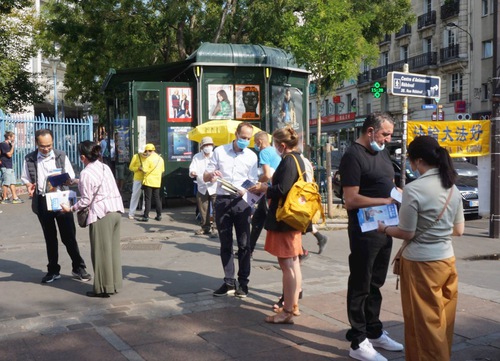 During an event on September 12, a young man named Yang Yang chatted with practitioners. He said the moral degeneration in China was drastic. “I had to give someone two cartons of Hongtashan cigarettes and one bottle of Maotai liquor (these are premium brands in China) to secure my CCP membership,” he explained.

CCP officials abuse their power by bullying ordinary citizens and amassing fortunes for themselves. “They treat us like dirt and we have no place to seek justice,” added Yang Yang. “They are even worse than the mafia.” He said that this was the main reason he left China. He thought that quitting the CCP would help benefit oneself and society.

Diane, a college student majoring in political science, stopped by the booth and asked about the situation in China. While signing a petition, she said, “I support human rights. I especially condemn horrible things such as forced organ harvesting.” She was very happy to help and wished the practitioners well.

Chinatown in Paris is located in the 13th District. People from Vietnam, Laos, and Cambodia, as well as China, live there. Many of them fled their home countries to avoid communist persecution, so they knew that their regimes were bad. For economic reasons, however, they were quiet about the persecution of Falun Dafa in China.

Practitioners go there regularly to tell people about Falun Dafa and how the CCP mistreats innocent people. After the pandemic situation improved in early September, practitioners began putting up banners across the street from a major Chinese supermarket. They also distribute information about the pandemic and the persecution every day. Several people changed their attitudes and are now willing to talk with practitioners to get more information. 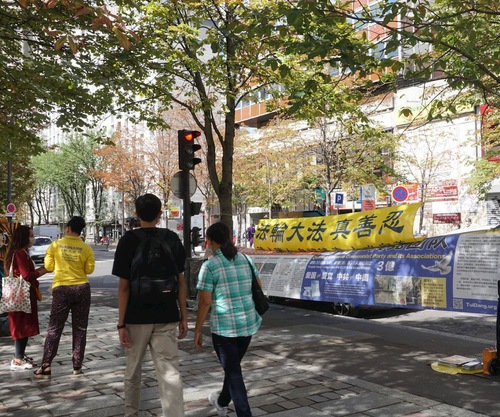 In honor of the Universal Declaration of Human Rights passed by the U.N. General Assembly in 1948, the nearby square was named the Human Rights Plaza. Facing the Eiffel Tower across the River Seine, it is one of the most famous attractions in Paris and draws millions of international tourists every year. 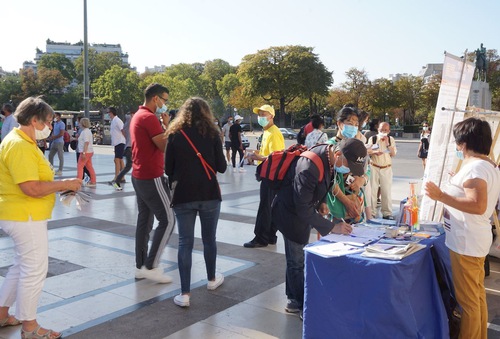 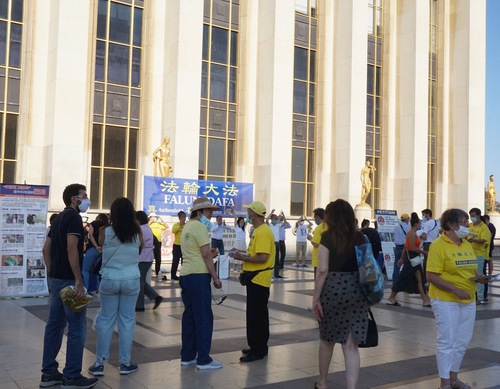 At the practitioners’ event there on September 13, most of the tourists were domestic travelers. One man said he quit the CCP organizations several years ago and that he knew the CCP's slander about Falun Dafa was untrue.

His friend said she liked the principles of Truthfulness-Compassion-Forbearance. “I wish more people in this world would follow them,” she added. Both of them signed petition forms calling for an end to the persecution in China and said they would read Zhuan Falun and learn more about the practice.

“U.S. Secretary of State on the Chinese Communist Party’s Threats to Western Values”