(Minghui.org) Today's news from China includes incidents of persecution that took place in 12 cities or counties in 6 provinces, where at least 22 practitioners were recently persecuted for their belief. 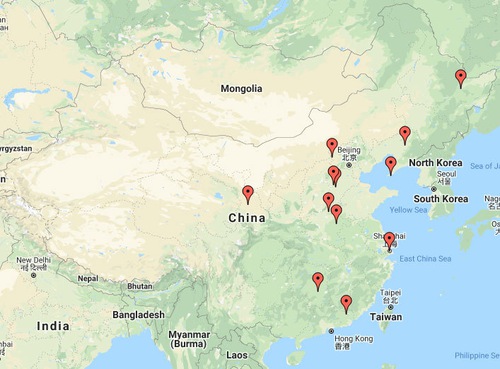 Mr. Gao Guo’an, 73, was summoned by the Jianshe Road Police Station for posting Falun Gong informational calligraphy couplets on his own door during the Chinese New Year in 2018. Afterwards the police kept returning to his home to harass him.

During the recent “zero-out campaign” (a concerted government drive to force each practitioner on the authorities’ black list to renounce Falun Gong), the neighborhood administration office officials and his family members have repeatedly pressured him to give up practicing Falun Gong.

Police moved forward in persecuting Mr. Gao, and took him to the Procuratorate and court in Huaiyang County on August 28, 2020. They handed him a notice of hearing and notification to hire a lawyer. He will be tried on September 1.

Officers from the Damiao Police Station, Nanyue District, knocked on the door of Ms. Liu Yuying’s home on July 4, 2020. They attempted to photograph her, which she refused. They left.

Two officials from the Yingbin Community Residential Committee went to 80-year-old Ms. Kuang Fengmei’s home and harassed her on August 1, 2020.

Last year, through surveillance cameras the police noticed Ms. Kuang was posting Falun Gong stickers. They went to her home to harass and threaten her several times. When bonuses were given out this year, the Nanyue District Comprehensive Management Office said that she posted stickers and deducted her 5,000 yuan bonus.

Officers from the Nanyue Town Police Station went to Ms. Yuan Meiyun’s home and harassed and questioned her on August 11, 2020.

Xiao Yingzhong, head of the Hengshan County Domestic Security Division, and other officers knocked on the door of Ms. Tu Qiuyun’s home and questioned her on August 19, 2020. They attempted to covertly photograph her; she realized what they were doing and refused. After questioning her, the head of the Domestic Security Division demanded she sign paperwork, which she also refused.

Four officers from the Nanbaishe Police Station went to 75-year-old Ms. Li Ruizhen’s home in Yujiagang Village and harassed her on the morning of August 28, 2020. Ms. Li was reading Zhuan Falun at the time. One officer grabbed the book and said he wanted to take a look. Later, the officer gave the book back to her. One officer told her not to go out to distribute the Falun Gong materials, while another officer videotaped.

Two officials from the Beita Residential Community, Dadong District, went to Ms. Bai Xiuhua’s home and harassed her on August 10, 2020. They told Ms. Bai’s husband to write the three statements for her, but he refused.

Ms. Zheng Jiajin, 80, and Ms. Zhu Fenglan. 65, were arrested at their rented home in Nangao Village by officers from the Xinxiang City Domestic Security Division on the afternoon of August 28, 2020. The officers confiscated a computer, a printer, and other items.

Several practitioners had just arrived at Mr. Zhao Qiguang’s home, when twelve policemen broke into his home on the morning of August 24, 2020. The officers handcuffed them and took them to the Xilin Police Station.

During the interrogation, if practitioners did not give any information, the officers would hit them in the face. Later, officers ransacked their homes and confiscated all their Falun Dafa books, computers, cell phones, and other items which were related to Falun Gong.

Ms. Xie Yunxiang from Xingning City was followed and arrested in Dongguan City when she distributed Falun Gong materials on August 23, 2020.

Ms. Zhao Chuanmei from the Pudong New Area was tried at the Fengxian District Court on the afternoon of August 25, 2020.

After much effort from her lawyer and family, her family members were able to attend the trial. The trial ended in less than an hour. Ms. Zhao was given a ten-month prison term and fined 2,000 yuan.

Zhang Guifang, Party secretary of Huai’an Town, and other people went to Ms. Wang Guixiang’s home after 7 p.m. on August 24, 2020. They photographed her and told her to press her fingerprints on a form to not practice Falun Gong. Ms. Wang refused and they left.

They went to Ms. Feng Jihua’s home around 8 p.m. that evening. They photographed her, and took out five sheets to have her fingerprint them.

Ms. Nie Meifeng, 57, retired from the Cultural Relics Protection Institute, Zhengding County Cultural Relics and Tourism Bureau, received a phone call from the institute in early July 2020. She was told to go there to sign paperwork. She did not go.

Diao Huaisheng (Party secretary) and Jia Yong (deputy director) of the institute went to Ms. Nie’s home on July 15. They tried to force her to “transform” and sign paperwork. She refused. They threatened her to withhold her pension if she refused to sign.

Kou Haining, director of the Bureau of Cultural Relics and Tourism, and four other people went to Ms. Nie’s home on the afternoon of August 13. They tried again to force her to “transform” and sign paperwork. She refused.

Wei Wenping and other people from the Bureau of Cultural Relics and Tourism returned to Ms. Nie’s home on August 27. They took photos of her and tried to force her to “transform” and sign paperwork. They threatened her and told her that she would lose personal freedom and her pension if she refused to “transform.” They also threatened that people in uniform would come and force her to sign the paperwork.

Ms. Qi Yulian (in her 70s, a family member of employees) and Ms. Liang Ailing (a retired worker) with the Lanzhou General Machinery Factory were reported to the police by security personnel when they distributed Falun Gong materials in mid-July 2020. They were monitored and followed by officers from the Qilihe Police Station through surveillance cameras.

Ms. Liang was arrested at home by officers from the Tumendun Police Station on July 30. Her home was ransacked. She was taken to the Lanzhou City No. 1 Detention Center.

Ms. Li Ya from Huating County, Pingliang City, was arrested by officers from the Jianlanlu Police Station on May 8, 2019. She was taken to the No. 13 Team, Lanzhou City No. 1 Detention Center on May 9, 2019.

“Clarifying the Truth about Falun Gong in the Police Station”

“Breaking Through the Internet Blockade”