Austria: Practitioners Hold Candlelight Vigil in Vienna to Raise Awareness of the Persecution

(Minghui.org) As the soft summer evening drew around Vienna, Falun Dafa practitioners lit candles in solemn remembrance of those who have died. “Good evening, everyone. We came here today to commemorate Falun Dafa practitioners who were tortured to death by the Chinese Communist Party during the past 21 years of persecution. Falun Dafa is a Buddhist school of cultivation practice that teaches one to live by the principles of ‘Truthfulness, Compassion, Tolerance’. Yet in the past 21 years, the regime has been brutally suppressing adherents including detention, torture, and worse, taking organs by force and selling them for profit.”

A practitioner broadcast the introduction to the meditation practice while Falun Dafa practitioners from many countries in Europe gathered outside the Karlskirche church in Vienna on the evening of September 12, 2020. Some sat quietly holding candles to commemorate those who have died in the persecution, while others demonstrated the exercises. Photos of some of the deceased practitioners were arranged in front near the banners. The area is popular with young people, and several stood listening to the practitioner. Some took information to read, while others asked practitioners to explain more about the persecution. 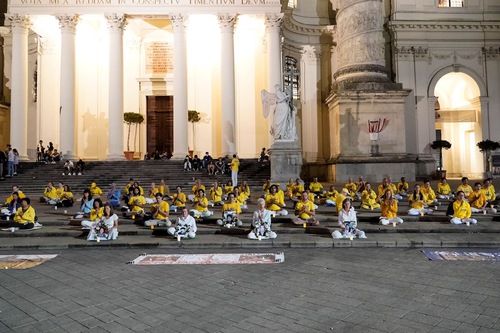 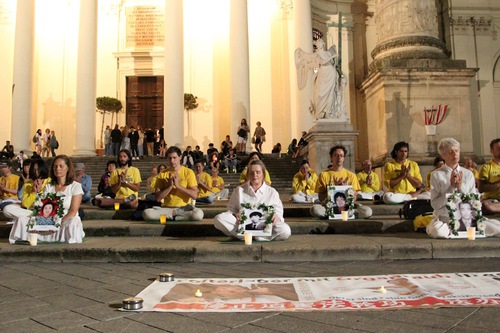 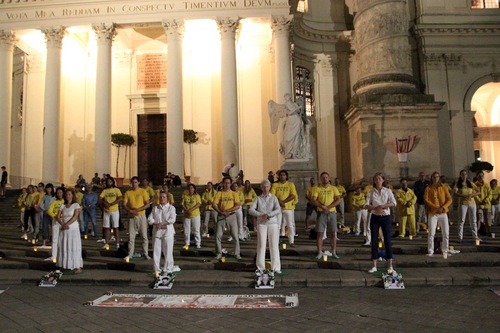 Practitioners held a candlelight vigil outside the Karlskirche church in Vienna to expose the atrocities and commemorate those have been killed during the persecution in China. 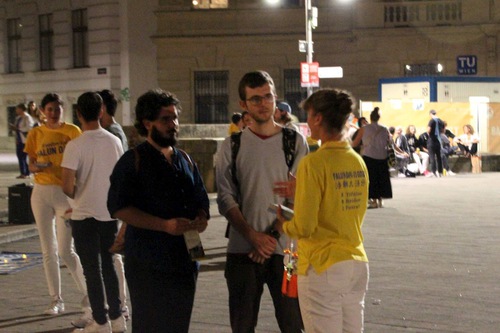 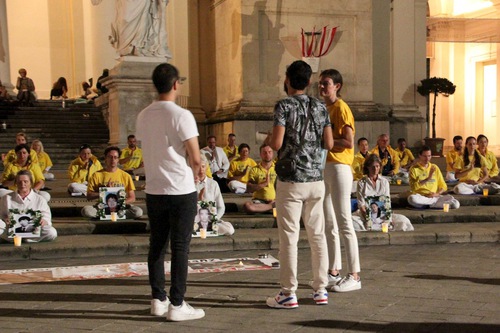 Passersby chat with practitioners and learn about the persecution.

How Can I Help You?

“How can I help you?” a young woman sitting in a wheelchair asked the MC. Alina Haehsler, 19, from Austria said she knew about Falun Dafa from the Internet, and learned more about it during the event that evening. “When I heard what’s happening in China, I really want to help,” she explained. Watching practitioners demonstrate the exercises, she said, “Its wonderful seeing so many people gathered together. It makes me feel that this is a great practice.”

She could not understand why the Chinese Communist Party (CCP) is incarcerating practitioners. “They look so peaceful I see no reason to stop them from doing this,” she said.

When she learned that practitioners are killed for their organs, she said, “This reminds me of the Auschwitz concentration camp. It’s terrible, and beyond imagination. We Austrians talk about what happened during the Nazi regime. A similar thing is taking place in China right now. Can we ignore it because it did not happen in Austria? No we can’t.”

“Some might say this isn’t happening here, so it’s not our problem. Of course this is our problem. We live in the same world. If something like this happened in this country I’m 100 percent sure people in other countries would lend a helping hand. Furthermore many things are now made in China. We will definitely be affected if something happens to China. We should stop this persecution together.”

She and her friend asked if there was a petition they could sign. “I think you have done very well. I really want to show my support,” she said. Her friend agreed.

Both women said they were interested in Falun Dafa, and asked where they could learn the exercises.

Please Don’t Give Up

Jbrahim Al Taee from Iraq accompanied Alina and her friend. The 19 year old, who is studying to be an archaeologist, said that he thinks practicing Falun Dafa is excellent. “This is a good way to help one have a clear understanding of oneself. I will recommend Falun Dafa to other people,” he said.

He found it inconceivable that the CCP is persecuting practitioners. “This is horrifying. How can the CCP torture people who only want to be kind and seek to improve their moral character? We can correct this wrongdoing in China if everyone in the world stands up to condemn the persecution.”

He gladly signed the petition to stop the persecution. “I believe good people will win in the end. I want to do something to support you. Seeing someone killed, or simply knowing someone is murdered and not doing anything goes against my conscience.” He wanted to tell the practitioners in China: “Please don’t give up. One day people will help you. You deserve to have a good life, free from persecution.”

This is Very Meaningful 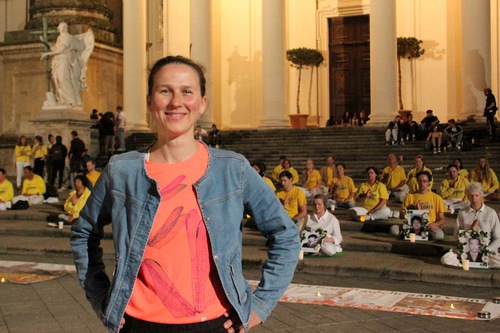 Alla Kirsha, a psychotherapist from Russia, was shocked by the brutalities and said, “Organ harvesting is inhuman. I cannot understand why they (CCP) would take people’s organs. This is so cruel. Falun Dafa practitioners ask for nothing. I don’t understand why they are being treated like this.”

She was born in the former Soviet Union and has a clear understanding about how corrupt high-ranking officials in the Communist Party are. She told practitioners, “You are transmitting real values. This is very meaningful.” She believes that some day China will get rid of it's autocratic rulers and have a humane government. She hopes that by signing the petition, she is playing a part in bringing this change.

“1,184 Falun Gong Practitioners Targeted for Their Faith in August 2020”