Made to Wear Straitjacket and Sprayed with Chili Water, Yunnan Woman Recalls 4.5 Years of Imprisonment

(Minghui.org) Ms. Zhao Feiqiong, 50, of Xuanwei City, Yunnan Province, was arrested multiple times for her faith in Falun Gong (also known as Falun Dafa), a mind-body practice that has been persecuted by the Chinese communist regime since 1999. She was previously given two years of forced labor and imprisoned three times for a total of 14.5 years. She was released on June 7, 2020, after serving the latest prison term of 4.5 years.

While incarcerated in Yunnan No. 2 Women's Prison, Ms. Zhao was handcuffed and shackled to a bed, forced to wear a straitjacket, and sprayed with chili water when she insisted on doing the Falun Gong exercises.

Below is an account of her latest arrest and incarceration:

Held in Detention Center for a Year

Ms. Zhao was arrested at the Kunming train station on December 7, 2015, after security personnel found 13,800 yuan banknotes with Falun Gong information printed on them in her purse. They took her to their office in the train station and handcuffed her.

Six police officers arrived shortly after. They emptied Ms. Zhao's bag and took her Falun Gong materials and DVDs. They also took her fingerprints without her permission.

That evening, Ms. Zhao was taken to the Second Affiliated Hospital of Kunming Medical University for a physical exam. The officers used wide transparent tape to seal Ms. Zhao's mouth when she shouted, “Falun Dafa is good!” The tape was not removed during the exam.

Ms. Zhao was taken to Railway Detention Center that night. The detention center initially refused to admit her because a section of the physical exam report was missing, but later relented after being pressured by the police.

The next afternoon, Ms. Zhao was taken home with her hands tied and feet shackled. Without a search warrant, the police ransacked her home and confiscated her Falun Gong books and materials, laptop, tablet, and cell phone. When Ms. Zhao refused to sign the list of confiscated items, the police deceived her father into signing it. She was then taken back to the Railway Detention Center and transferred to Xuanwei City Detention Center the day after.

Guards at the Xuanwei City Detention Center hit her and slapped her three times in the face for shouting “Falun Dafa is good!” Her mouth started to bleed.

Ms. Zhao was taken to Xuanwei City Remin Hospital for a physical exam on December 10 while still handcuffed. After the exam, she was taken back to Xuanwei City Detention Center. The police ransacked her home on December 29 without informing her. Her arrest was approved in mid-January 2016.

Ms. Zhao was detained for a year and a month in the detention center and was forced to make aluminum joss paper. The police interrogated her several times.

Sentenced to 4.5 Years in Prison

Ms. Zhao was later indicted by the Xuanwei City Procuratorate. The prosecutor threatened her with a heavy sentence after seeing she’d used chalk to write Falun Gong information on the detention center's blackboard. They took a photo of what she wrote and included it in the prosecution evidence against her.

Ms. Zhao was tried in the Xuanwei City Court on August 2, 2016, and sentenced to 4.5 years on August 17. She appealed the verdict on August 24, but the Qujing City Intermediate Court ruled to uphold her sentence.

Tortured in Yunnan No. 2 Women's Prison

On January 10, 2017, Ms. Zhao was admitted to Yunnan No. 2 Women's Prison, where she had previously served eight years and suffered unimaginable torture.

Ms. Zhao refused to wear the prison uniform or do the unpaid labor. Instead, she did the Falun Gong exercises and shouted, “Falun Dafa is good!”

The prison authorities responded by putting Ms. Zhao on “strict management” in a cell next to the prison office. Several inmates were assigned to monitor her. The guards encouraged them to humiliate her and slander Falun Gong.

Because the guards would not let Ms. Zhao get her own meals, they ordered the inmates to get them for her. The inmates either brought her very little food when the dishes were cooked well or a big bowl if the dishes were poorly cooked. They also restricted her restroom use. In protest, Ms. Zhao went on a hunger strike for five days.

On September 18, 2017, Ms. Zhao and two other practitioners were placed in solitary confinement for talking about Falun Gong. The cell had only a bed and a small window for ventilation. The three practitioners were held separately. They took Ms. Zhao’s blood pressure beforehand, then the guards handcuffed her left hand to her left leg and right hand to her right leg for one day.

Those held in solitary were given only plain rice, no vegetables or meat. The guards decided when and how much water they could have. Although the solitary cell was very cold, the guards didn’t give Ms. Zhao any blankets or extra clothes and left her shivering. She was held there for 12 days.

The Minghui.org has previously reported that the Yunnan No. 2 Women's Prison administered drugs to practitioners that damaged their central nervous systems.

Starting in 2018, Ms. Zhao, who was healthy before being incarcerated, started to feel weak and had symptoms of a dry throat. She often tasted medicine in her mouth and kept salivating. Scary scenes also appeared in her mind and she felt an electric current running through her body. She was afraid to look at the surveillance camera because she thought something was shooting out from it and hitting her face. She also felt something drilling into her head, even when she was sleeping. She was in such pain as she couldn't describe the things she felt.

Ms. Zhao was locked in solitary confinement again on April 13, 2018, for two weeks. This time, she was transferred back and forth between two cells. She was not given regular meals and was often starving.

She cried to no reason and felt as if her eardrum had been perforated. Her voice had also changed and scary scenes continued to appear in her head. She started to hallucinate and saw her organs being extracted and sold. Her bones hurt while she was sleeping.

Ms. Zhao was extremely weak when she was released from the cell on April 27, 2018. She was disfigured because the tendons in her hands and feet had shrunk. She didn’t even have enough strength to stand.

In June 2018, the prison director, who holds a psychologist certificate; a prison guard; and another person who claimed to be a psychiatrist came to talk to Ms. Zhao. The psychiatrist asked Ms. Zhao questions about her family and concluded that she was fine. However, Ms. Zhao said that they frightened her and she didn't dare sit next to them.

Guard Xie Ling once swore at Ms. Zhao when she did the Falun Gong exercises. Xie also ordered an inmate to write down Ms. Zhao's “crimes” and told her to sign it. Ms. Zhao wrote “I’m innocent” and some information about Falun Gong. Xie was infuriated and tore up the paper.

In mid-June 2019, the prison transferred more than 1,000 of the 3,000 inmates to other prisons. The guards told Ms. Zhao that they now had more manpower to persecute her. 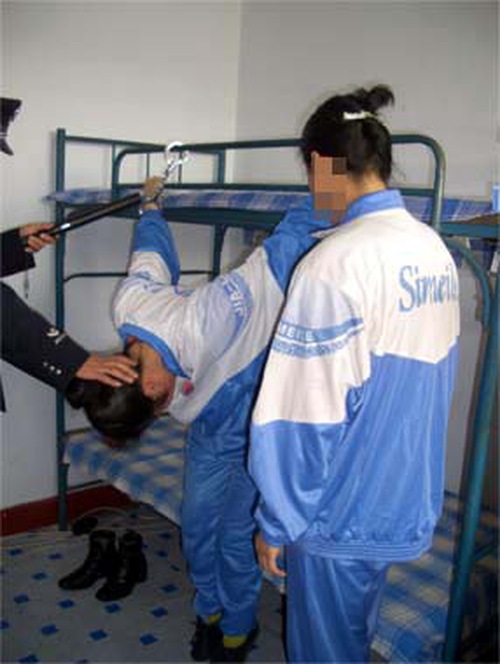 Torture re-enactment: Being hung up

The guards would also handcuff and shackle her if she did the meditation. She lost count of the number of times she was handcuffed for doing the exercises.

On the night of June 20, 2019, Ms. Zhao was doing the exercises in the room when a guard saw her. The guard told an inmate to confiscate Ms. Zhao's blanket and she had to use her clothes to cover herself at night.

When Ms. Zhao continued to do the exercises, the guard told the inmates to remove her pillow and quilt, leaving only a bare bed. Ms. Zhao would sleep on the bare bed after doing the exercises. Seeing that Ms. Zhao refused to give in, the guard told the inmate to remove her bed board. Despite this, Ms. Zhao continued to meditate and later slept while sitting on the floor and leaning against the bed frame. The guard then handcuffed her and instigated an inmate to hit her when she did the exercises during the day. When Ms. Zhao still refused to yield, her slippers, clothes, and plastic stool were all taken away.

While Ms. Zhao struggled with the inmate one day, the bunk bed in the cell toppled over. The prison attempted to blame Ms. Zhao for the incident but didn’t succeed.

To punish Ms. Zhao, the guards only gave her plain rice and nothing else. She held a hunger strike for three days before the guards agreed to give her more food.

They also forced Ms. Zhao to do unpaid labor in the prison workshop.

After that incident, the guards moved Ms. Zhao and her cellmates to another room, removed all beds in the previous cell and turned it into a place to persecute Falun Gong practitioners. Practitioners who were placed on strict management in that room had to sleep on the floor with only a thin layer of cotton padding and quilt. They were not given any blankets regardless of how cold it was. They were also not allowed to have anything except for a drinking cup and a small stool.

Forced to Wear a Straitjacket, Sprayed with Chili Water

Beginning on July 8, 2019, Ms. Zhao was ordered to go to the prison workshop during the day and return to her cell at night. When she said she wanted to do Falun Gong exercises instead, the guards instructed the inmates to make a straitjacket and put it on her. Ms. Zhao was unable to move and had to wear it for two days.

During a prison-wide gathering on August 9, Ms. Zhao shouted “Falun Dafa is good! Truthfulness-Compassion-Forbearance is good!” Another practitioner followed suit.

Both practitioners were quickly taken back to their cells. Ms. Zhao was not allowed to participate in any activity after that.

Three days later, the guards put Ms. Zhao and the other practitioner in strict management in retaliation.

Ms. Zhao continued to do the exercises in the cell and was handcuffed to the bed for 18 hours. The handcuffs were so tight the guards had to use a pair of pliers to open them.

In September, Ms. Zhao was sprayed with chili water, handcuffed to the bed at night, and not allowed to use the restroom for doing the exercises again. Everyone in the room choked from the spray and the smell lingered on the entire floor.

After the outbreak of the coronavirus, an inmate took Ms. Zhao’s temperature when she was still sleeping. In her sleep, Ms. Zhao touched the inmate, who reported that Ms. Zhao had hit her. Without trying to ascertain what had happened, the guards handcuffed Ms. Zhao to the bed and sprayed her face and neck with chili water.

For ten months, from July 2019 to May 2020, the police refused to let Ms. Zhao buy daily necessities. She had to use her one roll of toilet paper sparingly for a month. She was finally allowed to buy a set of clothes in May.

On the morning of June 7, the day of her release, the judicial office and community committee members came to pick Ms. Zhao up. One of her relatives also came. Sadly, her father was not present, as he had passed away in 2018 when Ms. Zhao was still serving her term and she didn’t get to see him for one last time.

Injected with Unknown Drugs in Prison, Locked Up in a Mental Hospital

“I Thank Master for Keeping My Family Intact”

“I Made My Own Schedule While I Was Illegally Detained”