(Minghui.org) The anniversary of the Slovak National Uprising is August 29. Falun Gong practitioners drove to Komárno city, on the southern border of Slovakia, bordering Hungary, for an information day and signature drive event. The event was held on the Namestie Generala Klapku plaza at the city's center. Practitioners have organized many similar events in different cities, to introduce Falun Dafa (also called Falun Gong), and expose the persecution of the practice, launched by the Chinese Communist Party (CCP) in 1999. 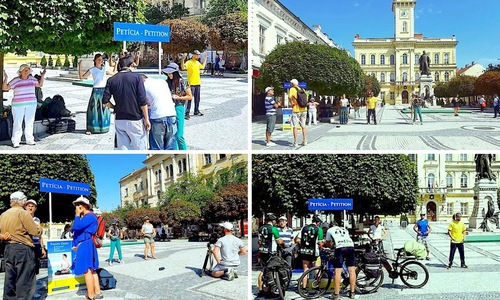 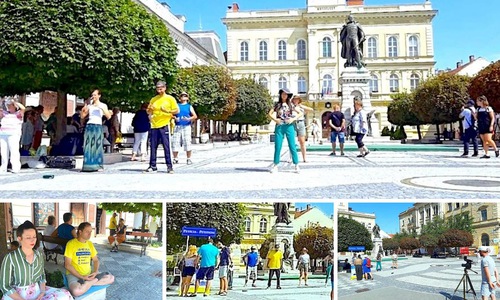 Komárno is a historic city with the majority of residents being Hungarians. Local residents showed great interest in Falun Gong, and many people signed a petition calling for a quick end to the persecution.

An older German couple watched the practitioners demonstrating the meditation, and chatted with a practitioner who was passing out brochures and talking to passersby.

They were shocked upon learning that Falun Gong practitioners are being jailed, tortured, and even killed for their vital organs, which are sold to transplant patients. After signing a petition calling for an immediate end to the persecution, people said that they were happy to be able to do something to oppose the persecution.

A young photographer was traveling with the couple. He took videos of the entire conversation and the Falun Gong exercise demonstration. He said that the couple was making a documentary about touring along the Danube river from its origin to the Black Sea.

A local resident took a brochure, and sat on a bench on the plaza to read the brochure and watch the demonstration. After the practitioners finished the meditation, he said, “Your mediation is very peaceful, and the music is very beautiful.”

He signed the petition and provided his contact information. He said he hoped to join a local practice group. He later brought some fresh grapes to the practitioners.

A group of young bike riders came to the plaza. After hearing the facts about the persecution still ongoing in China, they all signed the petition.

A local practitioner said that people usually stayed at home on this holiday. However, almost everyone who passed the event learned the facts about the persecution and signed the petition.

“Woman in Her 70s Faces Trial for Her Faith”