(Minghui.org) Today's news from China includes incidents of persecution that took place in 17 cities or counties in 7 provinces, where at least 40 practitioners were recently persecuted for their belief. 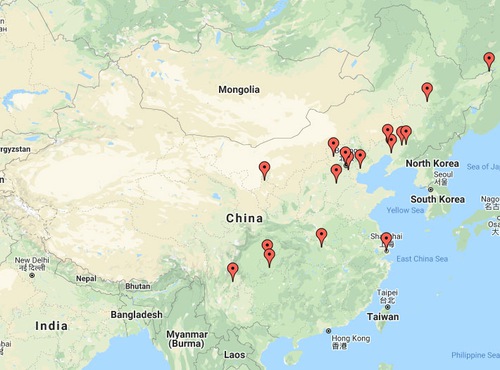 Mr. Lu Zhongzheng, a geography teacher at a high school in Guang’an City, was forced to resign for practicing Falun Gong.

Ms. Zhang Xiangrong and her mother-in-law, Ms. Liu Naifen, were sentenced to prison by the Anci District Court on August 21, 2020.

Elderly Ms. Qing was followed and arrested by officers from the Liaohe Oil Field Police Station when she was distributing Falun Gong materials on July 27, 2020. She was taken to the police station, where she was interrogated and forced to sign paperwork. The police took her fingerprints, body temperature, and blood samples. She was held for one day and night. She was released due to her body temperature being higher than normal.

At the same time, Ms. Xing Guangli, Ms. Du Jingxian, Ms. Fu Xianying, and two other practitioners were arrested by officers from the police station. Their homes were ransacked and their Falun Dafa books confiscated.

On the same day, officers from the police station arrived in three police vehicles at Mr. Wang Yingxian’s home and ransacked it. They confiscated Falun Dafa books and audio players. They attempted to take Mr. Wang to the police station.

Ms. Zhang Yun was arrested by officers from the Xindong Police Station at a bus station on August 20, 2020, for carrying Falun Gong materials in her bag. The officers took photos of her. They took her back home, ransacked the place, and confiscated three copies of Falun Dafa books and photos of the founder of Falun Gong.

Ms. Liu Jinying, from Chahe Town, Fengnan District, was arrested by officers from the Chahe Police Station on August 12, 2020. The police ransacked her home and confiscated many personal belongings, including over 4,000 yuan in cash. Ms. Liu has since returned home.

Ms. Gao Baozhi from Chahe Town was also arrested and her home ransacked on August 12, 2020. She has returned home.

Ms. Wei Meijin from Chahe Town was arrested and her home ransacked on the same day. The police confiscated over 10,000 yuan in cash. She has returned home.

Ms. Liu Lili, from Hancheng Town, Lubei District, was arrested by officers from the Hancheng Police Station on August 10, 2020. Her home was ransacked and a printer, computer, and printed materials were confiscated. She was released at around 7:00 p.m. that evening.

On August 13 and 14, Ms. Liu was taken to the Tangshan City Court and the Lubei District Court for compulsory nucleic acid testing.

She was forced to take a physical examination and a DNA test at Ankang Hospital on the morning of August 16. She was then taken to Tangshan City No. 1 Detention Center, which refused to admit her. She was then returned to the police station at 1:00 p.m. and was released at 4:00 p.m.

Elderly Ms. Qiu Shengshu from the Liangping District was taken to a brainwashing center by her son and daughter on August 8, 2020.

Ms. Zhao Chuanmei from the Pudong New Area was arrested at home on December 17, 2019, and detained at the Pudong Detention Center. She was officially arrested on January 22, 2020. She has been detained for over eight months.

Her lawyer recently received a call from the court, saying that Ms. Zhao will be tried by the Fengxian District Court on the morning of August 25, 2020. No one will be allowed to attend the hearing.

Ms. Zhang Yutao, from the family quarters of No. 410 Factory, was reported to police and arrested on August 21, 2020.

Ms. Ma Fengju and Ms. Liu Yuying are being detained at the Fushun City Detention Center. They are scheduled for trial by the Wanghua District Court at 11:00 a.m. on August 26, 2020. No one will be allowed to attend the hearing due to the pandemic.

Ms. Li Renying was arrested by a dozen or so officers from the Zengdu District Domestic Security Division and the Nanjiao Police Station on May 14, 2020, after officers broke down the door frame of her home. They ransacked her home and confiscated Falun Dafa books, photos of the founder of Falun Gong, a printer, computer, printer paper, U-disks, and other belongings. Ms. Li’s case was sent to the Zengdu District Court.

Ms. Wang Shulan from Xiangfang District will be tried via video-link at the detention center on August 28, 2020.

She was arrested during a police arrest campaign on September 11, 2019.

Ms. Xu Qinxiang and Mr. Jiang Yunfeng were called to the police department on August 19, 2020. They were then taken to the Fuyuan City Procuratorate to sign documents. They were notified that the Procuratorate would take them out of town next week to the Fujin City Court in preparation for their hearing.

Ms. Xu and Mr. Jiang were arrested by Chai Jinlin, head of Fuyuan City Domestic Security Division, and other officers on February 22, 2020. Their homes were ransacked and many Falun Dafa books, printed materials, computers, and printers were confiscated. Both were interrogated at the police station. The detention center refused to admit them due to the pandemic. On the following evening, both practitioners were released on bail for one year.

Ms. Min Xiujuan, 74, from Jiading District, was arrested and taken to the Anting Town Police Station by community personnel on August 20, 2020, for carrying Falun Gong materials. She returned home at around 9:00 p.m. that night.

Ms. Zhou Jianmei was stopped by Meng Xianzhong, Meng New Village Party secretary, Wanquan District, who threatened her not to put up any Falun Dafa posters, lest she be severely punished, to serve as a warning to others. Meng also insulted her and badmouthed Falun Gong practitioners in general.

Ms. Zhang Fenglan, 68, from Bin County, was arrested by Bin County police on the afternoon of August 18, 2020. The police ransacked her home twice that afternoon. They confiscated Falun Dafa books, photos of the founder of Falun Gong, and a laptop and desktop computer. She is being detained at the Harbin City No. 2 Detention Center.

Ms. Shi Cuiying and her daughter Ms. Guo Peng were arrested at a supermarket on August 19, 2020. The police took Ms. Guo to their home and to their newly bought house, and ransacked both places. They confiscated items related to practicing Falun Gong.

Ms. Shi was released on bail on August 21. Her daughter remains in custody.

Mr. Peng Jingjun from Pengzhaozhuang Village was arrested by six or seven officers at the intersection of Beiyuan Road and Xiangyang Street on August 19, 2020. He was detained by the Chengqu Police Department.

Qin Bao, from the Chengqu Police Department, and two other people went to Mr. Peng’s home and ransacked it on the afternoon of August 20. They confiscated five or six Falun Dafa books and other belongings. They recorded Mr. Peng’s mother’s voice, videotaped her, and asked her to sign the list of items confiscated.

Mr. Peng was placed in criminal detention on the morning of August 21. He was taken to the Jinzhou City Detention Center twice, and both times the detention center refused to accept him. He is still being detained at the police department.

Ms. Zhao Cairong and five other practitioners were arrested by officers from the Chengdong Police Station, Fumeng County, on August 15, 2020. They were arrested at the home of Ms. Shi Yaqin (who passed away due to persecution). Ms. Shi’s non-practitioner son, Xiaoliang, was also arrested.

“My Journey of Cultivation”

“Encouraged by Master, I Called Him Five Times in a Row”