(Minghui.org) A golden yellow tent with an eye-catching sign about Falun Dafa was once again seen on Falkenplatz Square in Lucerne on August 24, 2020. Many passersby read the sign out loud. Some stood in front of the display boards to read about the mind and body practice. Others signed the petition calling on the Swiss government to help end the persecution in China after they learned that the peaceful practice has been persecuted for 21 years. Some people had never heard of the meditation practice before, but others knew about it from practitioners' activities held at the city’s tourist destinations. 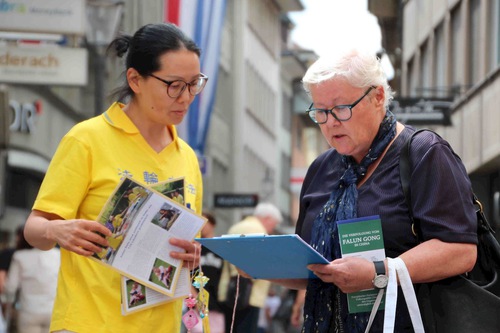 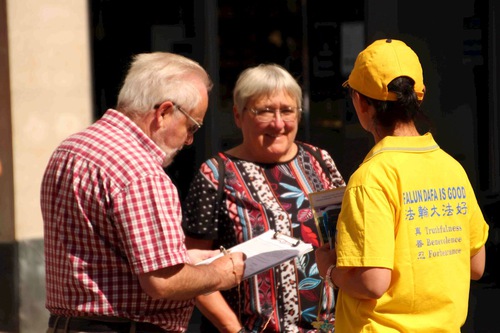 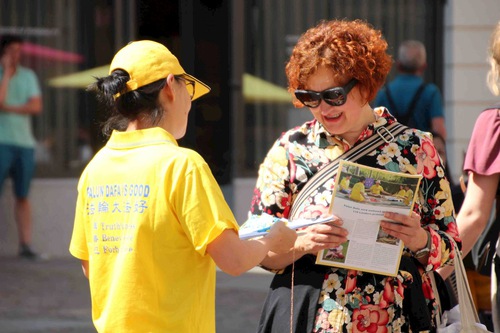 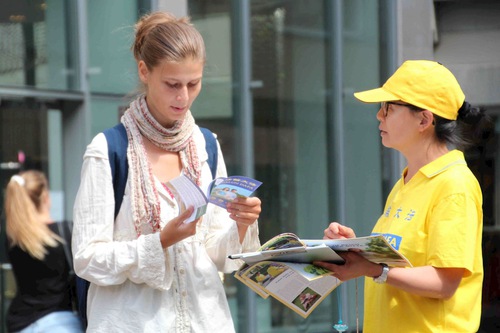 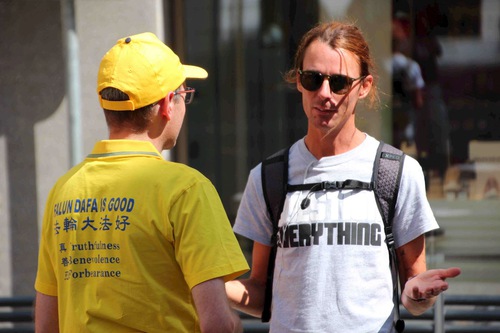 A passerby stops to chat with practitioners and learn more about the persecution.

“More People Should Know about the Persecution”

Sarah, a young woman who will soon begin her course in teaching, said this was the first time she had heard of Falun Dafa and the Chinese Communist Party’s (CCP) persecution. “I’m astounded. What those people have gone through is dreadful. I feel that practicing this will bring positive things. It’s so important for everyone to find inner peace. That is a way to restore your energy. It seems to me the CCP is afraid of losing its power.”

She hopes that, by signing the petition condemning the persecution, “There will be a turning point when there are enough signatures and sufficient media reports on the persecution to let more people become aware of this. Although you are doing this as volunteers, you have put your heart and soul into it. I hope the lives of those who are persecuted will change. Good luck!”

She wrote down the titles of the books about forced organ harvesting and the ruthlessness of the CCP. She said that she planned to recommend them to the library. “The authors of these books are very clear about what they are saying. I hope more people can learn about the atrocities by reading them. Although the information is shocking, change will only occur when people know about it.”

Organ Harvesting Is the Most Despicable Crime

After signing the petition calling for an end to the persecution, Mr. Silvio Good said, “Taking one’s organs just like that, treating people so unjustly, is a most vicious act. This persecution disregards human rights. It’s inhumane, savage, a killing of the soul. What else can I say? I hope my signature can help you succeed in stopping this persecution.”

A tourist from the Italian speaking part of Switzerland went to the information booth after reading about the organ harvesting. He carefully read the petition and signed it to express his support for Falun Dafa. “Killing prisoners of conscience for their organs is horrifying, a terrible crime, despicable. The regime has gone so far as to turn humans into a warehouse for organs.” He hopes that, by signing the petition, “The Swiss government will pressure the CCP to end this. I hope the government and everyone in the country will pay attention to human rights because so often this is neglected.”

People Should Do Something to Stop This

One man told practitioners that he’d learned about Falun Dafa at a similar event two years ago. “Removing people’s organs against their will should not happen. This is frightening. People’s freedom of speech is limited. The government persecutes them just because they expressed certain views. I think this is horrifying. We feel so extravagant here, to be able to enjoy such freedom, to be able to help others. It’s just a signature. It’s not too much to ask for,” he said.

“This persecution is dreadful. People shut their eyes and hope to live comfortably in their own small circle. We are all in this together. We should look around—people should try their best to lend a helping hand. Even if it is a small act, a tiny step can bring huge results. I hope the Swiss government will let the CCP know the Swiss people don’t want this persecution to go on. The government should come out of its comfort zone and say things the regime doesn’t like to hear.” He wished the practitioners success.

Marco, a volunteer at a Latin American school, said after signing the petition, “People have the right to express their opinions. They can have freedom of belief, everyone can make their own decisions. Often people think an individual is powerless to change anything, but that’s not true. If we first change ourselves, our surroundings will change and this will influence even more people.”

Raising Awareness about the Persecution Is the Right Thing to Do

Like the others, Mr. Felix Kaufman hopes the Swiss government will take action to help stop the brutality. “I think China’s human rights situation is worrying. Western countries should exert pressure to change this. I hope my signature can be an impetus for the government to step up efforts to rectify this problem and at the same time express the concerns of Swiss nationals. Although we have different traditions, human rights are universal,” he said.

He emphatically added, “Organ harvesting is despicable and upsetting. We should put forth great effort to stop this. This persecution is intolerable and underhanded. We must censure this loudly and start doing something.

“I live in Lucerne. I often see you at Lion Square. What you are doing is right and it’s important.”