(Minghui.org) Slovak Falun Dafa practitioners held an information day and signature drive in Sala, a small and beautiful town in Western Slovakia, on July 4, 2020. Practitioners demonstrated the exercises on the town center plaza while others passed out fliers and talked to passersby about Falun Dafa and the persecution in China. 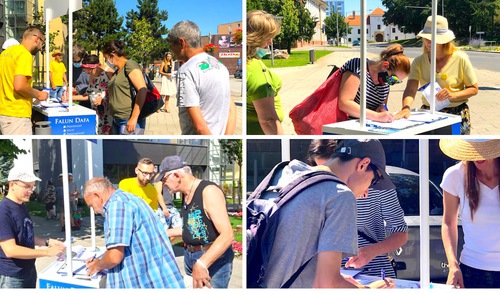 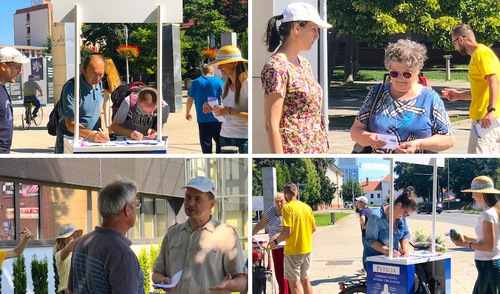 A woman was shocked to learn about the brutal persecution of Falun Gong and the Chinese communist regime forcefully taking organs from Falun Gong practitioners. She signed a petition opposing the persecution and calling for an end to the forced organ harvesting.

A young lady read the flier and immediately signed the petition. She thanked practitioners for coming to Sala and bringing this news to the locals.

A middle-aged man had some doubts that a signature drive could help stop the persecution. “I know about these happenings. I know the situation [in China] and I support you. But I also know what the Chinese communist regime is, so I don’t think a petition can help you much,” he said.

A practitioner told him that Falun Dafa is a cultivation practice focused on improving a person’s character by following the principles of Truthfulness-Compassion-Forbearance.

“When we have righteous thoughts, we can turn a situation toward the better,” the practitioner said. Hearing this, the man signed the petition.

Many people listened when practitioners spoke about the persecution of Falun Gong and explained the practice. At times people formed a line waiting to sign the petition.

A young practitioner named Mia had declined a couple of invitations from her friends and decided to join the event in Sala with her mother. She first participated in the exercise demonstration. Afterwards she rode her bike to pass out fliers on the sidewalk. Many people took a flier from her and thanked her. Some of them came over to sign the petition after reading the fliers.

A practitioner introduced Falun Gong to a young man who had practiced qigong for many years. The young man said he had seen some Falun Dafa practitioners meditating in a park when he traveled to Australia. He was very interested in learning Falun Gong and accepted an invitation to come to a group practice site.

“From Persecuting to Protecting Practitioners: The Journey of a Police Director”

“A Fellow Practitioner Reflects My Attachments”