(Minghui.org) Falun Gong practitioners held activities in Turku, Finland, on August 19, 2020, to raise awareness of the persecution in China. Turku, located in southwest Finland, is the oldest city in Finland, and was once the capital city.

Practitioners set up posters and banners on Yliopistonkatu, a spacious street with shops and supermarkets on both sides. They talked to people about what Falun Gong is and why the Chinese Communist Party (CCP) persecutes practitioners in China. After learning about the cruelty of the persecution, many people signed the practitioners' petition. 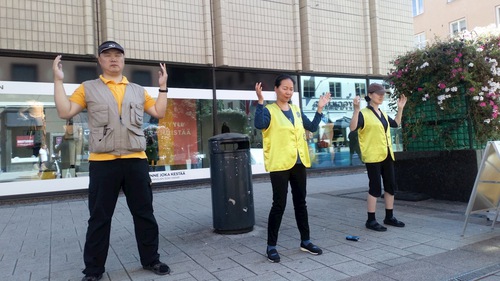 Niko and his girlfriend Sonja passed by the event venue and paused to take a look. Niko read the posters and was very touched by what he read.

“Each of us has a demarcated safety zone,” Niko said. “We would rather only believe in good things than bad information. But some bad information may be very important, like this persecution. It's unbelievable.”

A photo of a practitioner with a disfigured face after torture with electric batons by the Chinese police made him quite upset.

“Look how beautiful she once was. The CCP is really sick.” He called Sonja over to see the poster and she said, “It's really terrifying.”

“I like to meditate very much,” Niko told the practitioner. The practitioner replied, “I can teach you the five sets of Falun Gong exercises.” Niko then learned the exercises.

“Sonja, it's great,” Niko said, “This feeling is great. I have never felt like this before.”

“If your legs hurt while doing the meditation, you can do the single-cross leg position.” the practitioner said while teaching him the fifth exercise.

“I didn’t tell you, so how did you know that my leg hurts?” Niko said in amazement. He was later able to do the double-leg crossing position. 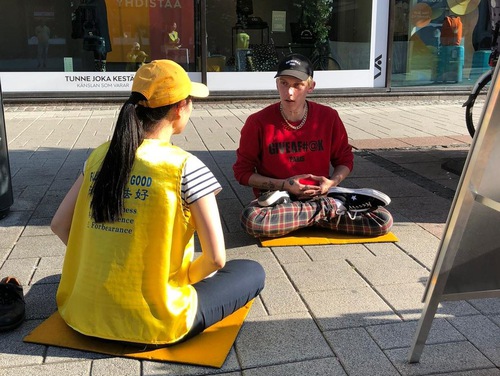 “I got a paper-folded lotus flower,” Sonja turned her head and happily said to Niko. She had been talking to another practitioner, “I didn’t tell her [that practitioner] that I like purple. She gave me a purple lotus flower. I believe this is fate.”

“Can I help you get signatures?” Niko asked enthusiastically. The practitioner thought it was a good idea, and Niko picked up a signature board to ask passersby to sign the petition against the persecution.

“I just hope you will sign the petition to help stop the CCP's crime of organ harvesting,” Niko said to passersby. Sonja showed them the leaflet about the CCP’s live organ harvesting.

They had collected nine signatures after ten minutes. Sonja said to the practitioners, “Niko is really moved by you.”

Passersby Support the Effort against the Persecution

“I signed your petition last time,” said a Turku student who was about 15 years old, “I brought my friend over and told her about the petition.”

She showed her friend a leaflet and brought her friend to the table to sign the petition. 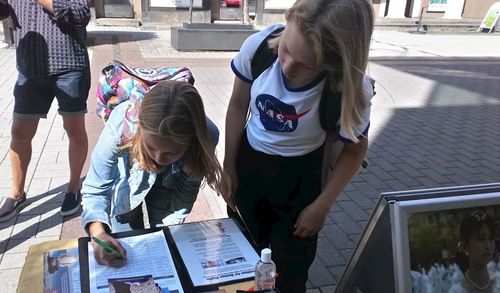 A student's friend signs the petition.

On the day of the event, a group of people from an electric utility company were doing a promotion on the pedestrian street. When several of them took a break together, a practitioner handed them leaflets.

“I want to sign the petition,” one of them said, “I will sign as long as it is against the CCP.” Others followed him and signed to express their support for Falun Gong practitioners’ peaceful efforts to end the persecution. 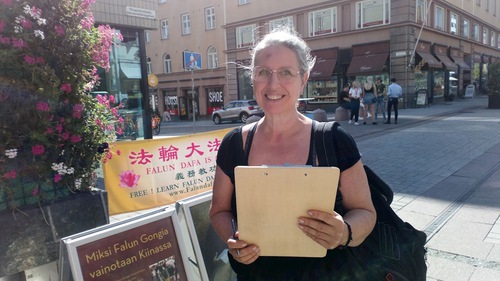 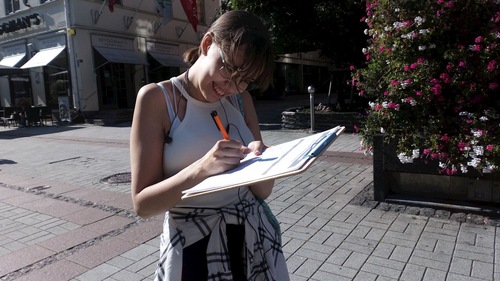 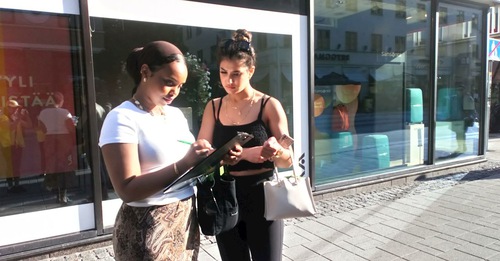 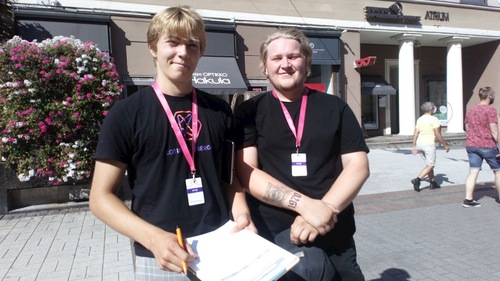 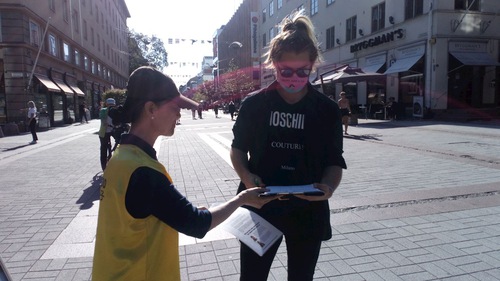 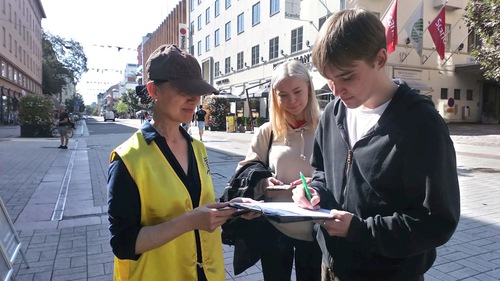 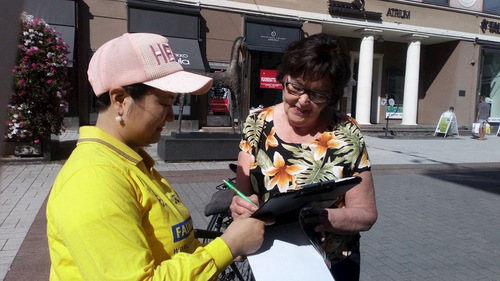 A man passed by and listened to a practitioner explain Falun Gong and why it is being persecuted. He said, “I'm on your side, but I never sign anywhere.” He walked around a little bit near the exhibition.

“Will you come tomorrow?” The man came over to ask while the practitioners were packing up to leave.

“We won't be coming tomorrow,” the practitioner said. “We will come when we have a break at work.”

“Then I will sign for you now,” the man said, “I know that you are all good people.”

Katarina is a youth adviser. She had watched a program about Falun Gong on TV. She said, “This persecution is just like the persecution of the Jews back then. People’s silence is not right. It encourages the evil,” she said.

Falun Gong was first taught to the public in 1992. Nearly 100 million people across China were practicing Falun Gong within a few short years after experiencing improvements in their health and character. Jiang Zemin, former head of the CCP, perceived the spiritual discipline's growing popularity as a threat to the CCP’s atheistic ideology and issued an order to ban Falun Gong on July 20, 1999.

The Minghui.org website has confirmed the deaths of thousands of Falun Gong practitioners in the persecution over the past 21 years; the actual number is suspected to be much higher. More have been imprisoned and tortured for their faith.

There is concrete evidence that the CCP sanctions organ harvesting from detained practitioners who are murdered to supply the organ transplant industry.

Under Jiang’s personal direction, the CCP established the 610 Office, an extralegal security organization with the power to override the police and judicial systems and whose sole function is to carry out the persecution of Falun Gong.