(Minghui.org) Today's news from China includes incidents of persecution that took place in 20 cities or counties in 10 provinces, where at least 28 practitioners were recently persecuted for their belief. 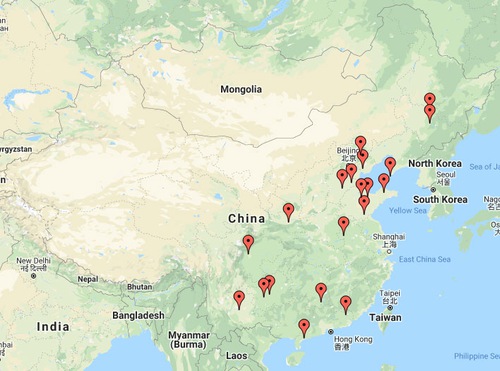 Ms. Zhang Shuilan will be tried at the No. 17 Courtroom, Xishan Court, on the morning of July 30, 2020. She was arrested by officers from the Panlong Police Department on August 19, 2019. She was indicted by the Xishan Procuratorate on September 24, 2019.

Ms. Tong Xianzhen received a notice over the phone on July 21, 2020, from the Wuhua District Court. She went to the court to pick up the indictment issued by the Procuratorate.

Ms. Wang Jiaqin, 73, was contacted by Zhao Shujuan from the Jian’an Neighborhood Committee, on May 27, 2020, who advised her to go there and pick up a “ride permit.” When she arrived she was held in the neighborhood committee office, and told to sign paperwork.

Before that, on April 15 and April 28, some people went to her home and demanded that she sign guarantee statements promising to renounce Falun Gong.

Ms. Feng Peirong was arrested on December 4, 2018. She was tried by the Xixiu District Court in November 2019. Her family received a phone call from her lawyer, and learned that Ms. Feng had been sentenced to 12 years in prison. She refused to accept the first judgment, and asked her lawyer, who was based in Guiyang City, to appeal to the Anshun City Intermediate Court. So far, the case has not reached a conclusion.

Mr. Liu Yuecheng received a phone call from Wang Qingwei, acting Party secretary of the Changle Residential Community, Xujiahu Town, Yishui County, on the afternoon of June 24, 2020. Wang tricked Mr. Liu into going to the community office. He demanded to know if Mr. Liu still practiced Falun Gong, and where he worked.

Wang called Mr. Liu back to the office the following morning. He again scolded and yelled at him. He tried to force Mr. Liu to give up practicing Falun Gong. He photographed him and abused him for over an hour before letting him go home.

Mr. Liu Yongtian and his wife from Dongwu Village, Xuzhuang Township, Jizhou District, were arrested by officers from the Jizhou Town Police Station and village officials on the afternoon of June 8, 2020. Their home was ransacked, and photos of the founder of Falun Gong and Falun Dafa books were confiscated. The couple was taken to the police station for interrogation, and released that afternoon.

Ms. Wang Chunxiang was arrested by officers from the Qifengdu Town Police Station while talking to people about Falun Gong in town on June 16, 2020. She was taken to the Chenzhou City No. 1 Detention Center.

Practitioners in the Nanpi County downtown area have been harassed by community personnel, officials from their work units, and local police officers since June 2020. The police have phoned them, gone to their workplaces, and to their homes, to harass them. They demanded to know if the practitioners still practiced Falun Gong. They videotaped practitioners at work and at home.

Elderly Ms. Sun Guizhen was arrested by officers from the Wenjia Police Station on the morning of July 9, 2020. Her home was ransacked, and her electric tricycle was confiscated. She was released that afternoon.

A group of these people broke into Ms. Yu’s home, her son’s storefront, and her daughter’s home, and ransacked the places. They smashed the doors, broke the locks, and turned over the cabinets. Ms. Yu was arrested at her daughter’s home. Her electric tricycle was taken away, but was later returned.

Another group of people broke into the place that Mr. Li Chunmin’s son was renovating, and arrested Mr. Li. They also intercepted and confiscated the electric car that Mr. Li’s son was driving when he brought food to Mr. Li. The car was returned. They then broke into Mr. Li’s home, rummaged through cabinets, and pried open drawers. They confiscated four photos of the founder of Falun Gong, a computer, and an audio player. They videotaped the process, which went on for two hours.

Ms. Yu and Mr. Li are being held in the Linquan County Detention Center.

Ms. Zhao Hui from Lejia Township, Pulandian District, was arrested on July 11, 2020. Her mother was told to pay 3,000 yuan in exchange for Ms. Zhao’s release.

Ms. Yang Yanyun was arrested at home by officers from the Yanta District Police Department on July 13, 2020. It was reported that her non-practitioner husband and daughter had also been arrested.

Ma Xijing, village Party secretary, sent by secretary of the Huanggezhuang Town Political and Legal Affairs Committee, went to Ms. Zhang Ruilian’s home and harassed her on the afternoon of July 23, 2020. Ma told Ms. Zhang to go to the police station to sign a guarantee statement promising to stop practicing Falun Gong.

Yao Chunyan, the Wujie Village Party secretary of Xuanzhuang, went to Ms. Zhang Shuyin’s home and harassed her on the morning of July 26, 2020. Yao told Ms. Zhang to sign a guarantee statement promising to give up practicing Falun Gong. Yao threatened Ms. Zhang that if she refused to sign, her grandson would not be allowed to join the People’s Liberation Army.

Ms. Qiao Ruirong was reported to the police for talking to people about Falun Gong. She was arrested by two officers from the Cuiping Police Station on the afternoon of July 27, 2020. The officers found a few copies of Falun Gong brochures after searching her bag. They pushed her into the police car, and took her to the police station, where the police forcibly searched her bag again, and measured her temperature. The police also photographed her and took blood examples from her. She was released at around 7:00 p.m.

Xiejia Township government personnel, along with the village security director in Heilin Town, went to Ms. Wang Hongjie’s home in Taiping Village and harassed her at noon on July 28, 2020. They asked Ms. Wang if she was still practicing Falun Gong, and told her to sign a guarantee statement, promising not to practice Falun Gong. They threatened Ms. Wang that if she refused to sign, her children would not be able to enroll in college or join the People’s Liberation Army. They said that the higher authorities issued a document saying that if she refused to sign, the police would arrest her.

Ms. Zeng Xiaoli from Jiaoling County was arrested at home after dinner on July 15 or 16, 2020. Her home was ransacked.

Officer Liu Renqiang from the Yiyuan County Domestic Security Division, along with officers from the Yuezhen Police Station, arrested Ms. Tan Jinmei from Nanbaozhuang Village on July 8, 2020. They ransacked Ms. Tan’s home and confiscated Falun Dafa books and printed materials. They threatened Ms. Tan to tell them where the materials came from.

They later went to Ms. Yi Lanzeng’s home, ransacked the place, and confiscated all her Falun Dafa books and printed materials. Ms. Yi was not arrested due to her injured foot.

Ms. Xue, 68, was arrested on July 27, 2020 for talking to people about Falun Gong. The police took her keys, and four officers ransacked her home. According to her neighbors, the police confiscated a computer and all her Falun Dafa books.

Ms. Yang Jifang from Yuanjiquan Village, Jiuchi Town, received a phone call from the village head on May 3, 2020. She was told to go to the village office to sign paperwork and listen to her case announcement. She refused to go.

The village head, the village security director, and Wei, head of Township, went to Ms. Yang’s home and demanded to know if she was still practicing Falun Gong.

Huang Meng and Huang Rong, who are network administrators, went to Ms. Yang’s home and photographed her on June 10, 2020.

Feng Shijian, from Jiuchi Town, Huang Meng, and a section head named Yang Keju, went to Ms. Yang’s home again on July 21. They forced her to sign and fingerprint statements.

“The Story of Du Zichun”