(Minghui.org) For as long as she could remember, Lin Kaixin’s life was more bitter than sweet. That was until 1999, when she came to a turning point and saw hope in her life. Below is her story.

“My health was terrible when I was young. Whenever I came down with the flu or a cough, I would not be able to eat or drink for a week. I nearly died from bleeding in the stomach once. As an adult, I once lost consciousness for seven days after catching a severe cold. After I got married I moved to Penghu Island. I couldn’t keep food down during my entire pregnancy. I threw up every time I ate and even when I drank water. I lost a lot of blood when I gave birth to my first child, and my body discharged pus for several months. The doctor said my uterus was almost entirely damaged. Six years later, I gave birth to my second child, and again I lost a lot of blood,” she said.

After having two children, her life hung on by a thread. “Every time the autumn winds came, I would cough the whole night and could not sleep, from autumn to winter. I also had a genetic blood disorder. I would feel dizzy when I got out of bed in the morning and would have to support myself against a wall for five minutes each time to get from my bedroom to the kitchen. On top of that, I suffered from urinary incontinence and had a bone spur on my cervical spine. I had insomnia for 14 years. The doctor also found an 8 cm tumor in my body. I had endless health problems. My husband said there was not a single part of my body that was okay. I even thought I wouldn’t live long enough to see my daughters grow up.”

As she struggled with her ill health, Kaixin kept searching for a reason to live. She often thought, “I was someone’s daughter when I was young. I became someone’s wife when I grew up. After I had children, I turned into a mother. Can it be that the next thing in life is illness, old age and death? Surely there must be something more important in my life than this?”

Though she hardly watched television, in 1999 she saw a scene by chance: a group of people, men and women, young and old, of different ethnicities, were exercising to music in New York City's Central Park. Their movements were synchronized, and everyone looked serene. It left a deep impression on Kaixin.

“The camera focused in on a young, black man. His eyes were shut, and he looked extremely peaceful. I was moved by the scene. What are these people doing? How can they be so calm? As I continued to watch the program, I realized they were practicing Falun Gong,” she recalled.

“The ancients have a saying, “Having heard the Dao in the morning, one can die in the evening.”” (“Melt Into the Fa”, Essentials for Further Advancement)

Inspired by what she had seen, Kaixin searched everywhere for information about Falun Gong. The very next day, she jumped on a plane to Taipei and went to the practice site at the National Chiang Kai-shek Memorial Hall. “I had learned about meridians in Chinese medicine. I knew that it takes several decades to link up two of the body’s energy channels, the front side’s conception vessel and the back side’s governing vessel. However, as I followed other practitioners in doing the exercise movements, my energy channels were opened and I could feel them spinning automatically in my lower back area. I also felt Falun entering and moving in my body.”

Kaixin used to study Buddhist scriptures, seeking a purpose in life and to improve her health. She even learned Zen Buddhism and practiced meditation. But no matter how many books she read, they could not compare to her experience during the two hours she spent learning the exercises of Falun Gong. “It is usually taboo in Zen Buddhism if it is empty beneath you. But I saw several practitioners doing the sitting meditation on drainage ditch covers, and they were still as mountains. I read many books on meditation. One of them was written by a famous Zen Buddhist master. I never experienced anything. But when I did the sitting meditation of Falun Gong for the first time, what I felt far surpassed all the phenomena I had read in books previously. I was truly astonished.”

Before boarding the plane back home, she went to a bookstore to look for Zhuan Falun, the main book of Falun Gong, but it was sold out. “I didn’t know why. I had read so many Buddhist scriptures already, yet I felt dejected at not getting the book, as if I had lost a very important object in life. So when I returned to Penghu Island, I kept looking for the book. Finally I got a copy from a woman from China who had married someone on the island.”

Every word in Zhuan Falun struck a chord in her heart like thunder. She felt as if all the heavenly secrets had been revealed. “I would often read the book and slap myself on the thigh, exclaiming, “So that’s how it is!” Every day I would come to understand something that I had been asking myself, asking others, and searching for in books, but had not been getting any answers to. As I continued to read the book, I felt as if I was surrounded by a holy energy field. I was certain I had nothing to be afraid of in life anymore.”

Determined to put the teachings into practice in her daily life, Kaixin regarded the hardships and adversities she faced as opportunities to improve her character. “My mother-in-law caused me a lot of pain and gave me a lot of pressure in the past. I often went to the beach alone and cried my eyes out. People thought I was going to kill myself. After I became a Falun Dafa practitioner, I discovered that my feelings toward my mother-in-law had changed from utter agony to helplessness and then to feeling that there was nothing out of the ordinary. In the end, I let go of my anger and resentment. I felt at peace with myself. I was able to get to this stage because I understood that I had a predestined relationship with my mother-in-law. There is a reason for the pain and everything that I went through. Perhaps people might think I have high moral values and don’t get agitated easily. But this is the power I gained from practicing Dafa.”

Many years of suffering from health problems had made Kaixin a self-centered person. As she immersed herself in the teachings of Falun Dafa and learned to live by its principles, Truthfulness-Compassion-Tolerance, she became aware of her shortcomings. “I realized how badly I had been treating my husband after I began to cultivate my character. Due to the problems with my cervical spine, I would lie in bed for more than a week and rely on my husband to handle everything. I only thought of myself, how much pain I was in, and I blamed my husband for not being at home all the time. Looking back, I really feel ashamed. Isn’t it because I am always in a bad mood that he doesn’t like to be at home? How could I show him a long face just because I didn’t feel well?”

As she gradually got rid of her shortcomings, resentment, reliance on others and passivity, Kaixin rediscovered her kind, humble and considerate self. “I only see good things in my husband now. I am truly grateful for all the things he has done. Even if we have conflicts, I would first reflect on what I have done wrong and remind myself to treat others with kindness. He then smiles as if nothing had happened,” she said. 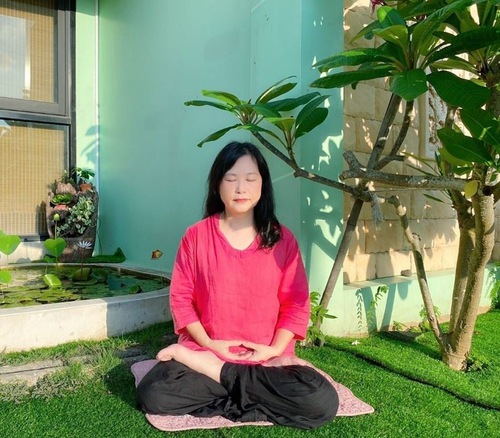 Kaixin worked on getting rid of selfishness soon after she began to practice Falun Dafa, and her body went through a complete transformation. “In the past, when I went shopping for groceries, I could not carry even 1 kg of stuff because of my poor health. When I lifted things, I felt as if my uterus was going to fall out. My husband had to come along to help carry my purchases. I now have no problems carrying 20 or 30 kilos. My husband thinks I have become a completely different person.”

One time her husband told a friend on the phone, “My wife went through two major transformations after practicing Dafa. I thought this would never happen. First of all, she was actually able to get up at four in the morning to do the exercises. In the past she wouldn’t have been able to because of her poor health. So from the time they were little, my children had to set their alarm clocks and get up early to make their own breakfasts. The second thing was that my wife had suffered from insomnia for a long time, and she would wake up at the slightest sound. Nowadays, she sleeps even more soundly than me. Once, two dozen ambulances with sirens blaring went by, but she slept like a log.”

Kaixin laughed and said she can still sleep well no matter how noisy it is; when it is cold, her body feels warm like the sun. “Before, it was torture for me every winter because of my poor circulation. Blood couldn’t go to the tips of my hands and legs. So, when I wrapped my legs in blankets during winter, it was as if there were numerous ants biting me. It was so painful I couldn’t sleep at all. But if I took my feet out, the cold was unbearable. Plus, with the insomnia, life was truly miserable. Now I don’t feel cold no matter what season it is. My hands are warm even when the weather is cold. My husband wraps himself in thick blankets, but I’m so hot that I’m sweating. I feel warm and comfortable all the time.”

Kaixin has operated a bed and breakfast on Penghu Island for many years. “Whenever I chat with guests, they ask, 'Your daughters are grown up, but you look so young. Your complexion is amazing.' I would then share with them my experiences in practicing Dafa. One time, I chatted with a group of lecturers and professors for a whole night. They enjoyed the conversation so much they did not want to go to bed. They told me they saw people practicing Falun Gong at school every day. They only just realized how wonderful it was and said they had to try it out when they got home. There were many people like this. A lot of my guests feel the sincerity and kindness of Falun Dafa practitioners and return to visit me every year.”

Before practicing Dafa, Kaixin felt that her life was miserable and full of adversity. She understood the meaning of life and its value after she started to practice cultivation. “When I think of Dafa’s principles and am considerate of others, I’m not bothered by troubles and difficult situations. As long as your first thought is to be selfless, you will walk on a bright, wide path arranged by Master.”

She felt as if she had been reborn because of Dafa. The spiritual discipline has taught her the profound meaning of life and how precious every life is. “I want to tell everyone: Dafa is the brightest guiding light in this dark society. As long as you want to learn more about it, you will truly benefit.”