(Minghui.org) Falun Gong practitioners gathered on Human Rights Square in Paris on July 12, 2020 to do the exercises together and call attention to the ongoing persecution of Falun Gong in China. The French Government started easing coronavirus restrictions two weeks earlier, and though few overseas visitors were at Paris' popular tourist areas, many locals were drawn to the practitioners doing the exercises. Many stopped to watch the exercise demonstration and learned more about this spiritual discipline from China. 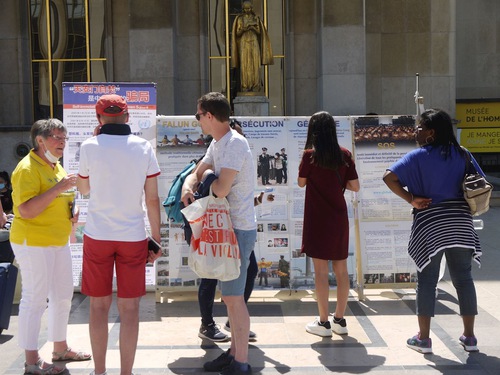 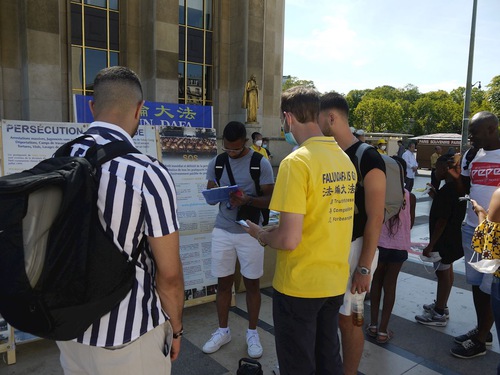 Many signed the petition calling for an end to the persecution of Falun Gong in China.

Ms. Thomas, her husband, and their friend happened to come across the Falun Gong practitioners on the square. She was very disturbed to learn about the Chinese communist regime’s atrocities against people who live by the principles of Truthfulness-Compassion-Forbearance, and she said she was especially appalled to learn about the government's harvesting of practitioners' organs without consent.

“Organ harvesting is appalling and cruel. One does not have the right to do this to another human being. The Chinese regime is abhorrent. We must stop this. The perpetrators should be punished. Everyone in the world should know this is happening. Truthfulness-Compassion-Forbearance – these are principles of humanity. We must uphold these values,” she affirmed.

Maryle, a university student who wants to become an engineer, gave her thoughts about the situation in China. “Like other young people, my information source is media reports. I never heard of organ harvesting before. This is horrific and extremely despicable. This should be exposed worldwide. People should do something after learning about such a brutal thing. Signing the petition is something within my means, therefore I will sign it,” she said.

“Truthfulness-Compassion-Forbearance is a powerful force to counteract the atrocities you uncover. These are rather positive ethics. The three words on your banners inspire people to sign your petition. You have chosen this way to expose the violence and crimes,” she added.

Bashir Maleoui, a real estate investor, also expressed his opinion about the atrocities happening in China. “Everyone is aware that China has several thousand years of history. Truthfulness-Compassion-Forbearance are wonderful values that have been passed on and provided guidance for several thousand years. The Chinese communist regime shouldn’t take away people’s freedoms because of their religion and faith. All forms of persecution should be stopped. It is immoral for whatever reason,” he said.

Anne-Marie Astrera, an employee at a French company said, “Everyone should follow and abide by Truthfulness, Compassion and Forbearance. We should uphold justice and stop this persecution.”

Practitioners encountered several young Chinese people who have been working in Paris. They agreed to renounce their memberships in the Chinese Communist Party (CCP) and its affiliated associations after learning that 350 million Chinese had already quit the CCP. Several of them also took some information to read later, including copies of “Nine Commentaries on the Communist Party.”

More and more people are now aware of the evil nature of the CCP after experiencing the coronavirus pandemic. Several French people told practitioners that they don’t believe any information from the CCP, as it is all lies. They also said that businesses should stop manufacturing in China and move the nation's manufacturing base back to France. Many people said the pandemic has taught them that it is dangerous to rely on China.