(Minghui.org) “The Falun Gong parade is coming!” On the morning of August 9, 2020, Chinese people in Seoul’s Chinatown shouted in excitement to welcome a rare event during the CCP virus (COVID-19) pandemic. People came out of their buildings while others paused on the street to enjoy the grand parade held by Falun Gong practitioners. The parade was held to support the more than 360 million Chinese who have quit the Chinese Communist Party (CCP), condemn the persecution of Falun Gong, and encourage people to stay away from the Chinese regime. 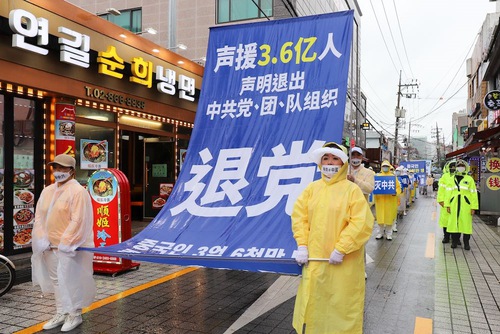 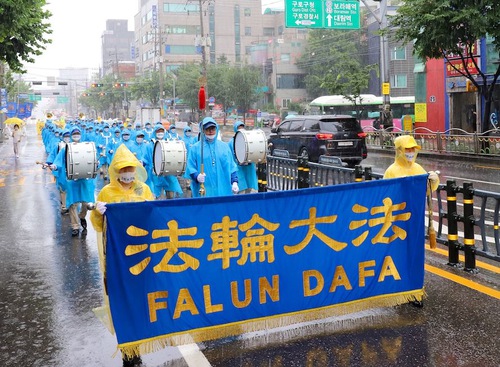 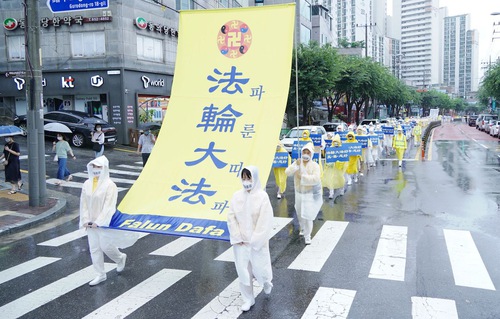 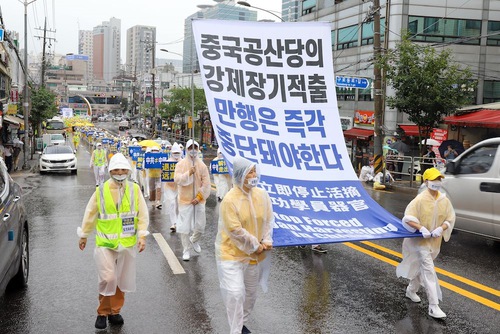 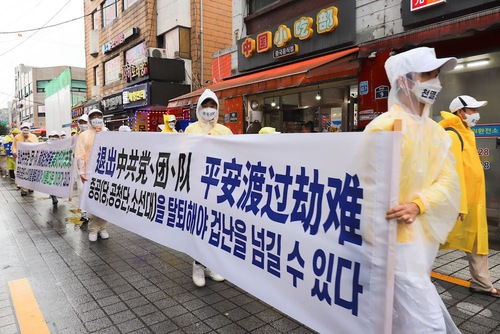 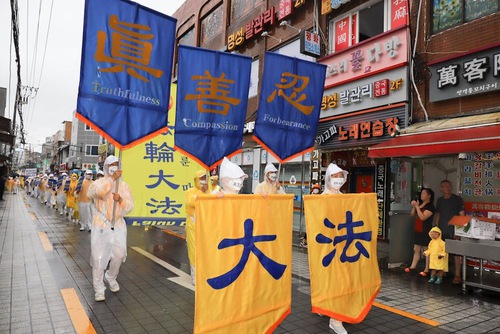 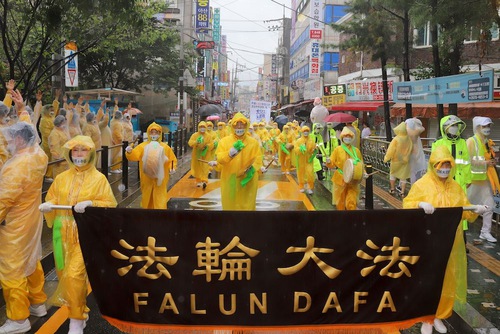 To start the day’s events off, five hundred Falun Gong practitioners held a rally at Seoul Children’s Grand Park around 10 a.m. At 11 a.m., they assembled for the parade and headed to Chinatown, made their way through the Daelim Traditional Market, and returned to the Children’s Park. The message of the parade was simple: quit the CCP to repel the coronavirus. 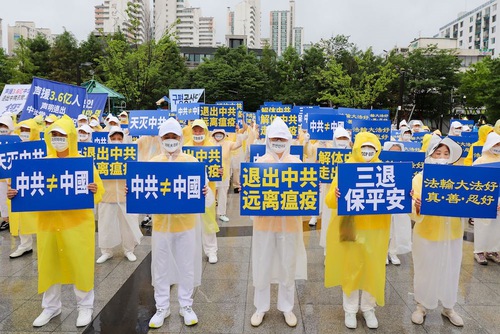 Falun Gong practitioners held a rally before the grand parade. 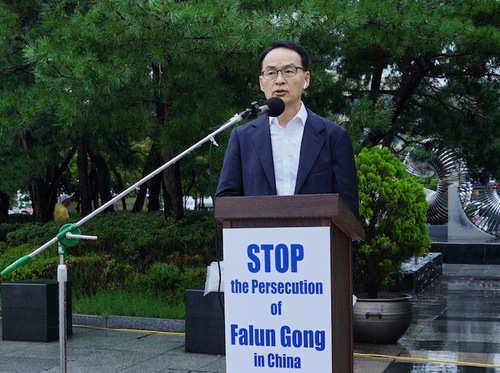 Dr. Wu Shilie, Secretary of the Falun Dafa Association of South Korea, spoke at the rally.

Dr. Wu Shilie, Secretary of the South Korea Falun Dafa Association, addressed the rally, “There are over a million Chinese people living in South Korea. Because of the CCP’s deception and propaganda, most of them do not know why the CCP persecutes Falun Gong and the extent of the brutality suffered by practitioners in China. Since the U.S. government has considered banning Party members and their families from entering the U.S., the number of Chinese quitting the CCP has increased.”

“It is our hope that, through this event, we are able to tell people about the benefits of practicing Falun Gong and why it is necessary to quit the CCP and its affiliated organizations.”

Quit the Communist Party to Steer Clear of the Coronavirus

Ms. Gao Chengnv from the Global Service Center for Quitting the CCP explained why there is such a trend of Chinese quitting the Party. “Most Chinese people believed the CCP’s propaganda. They had a negative impression of Falun Gong and no idea about the persecution and the severity of it. When they traveled overseas, they had free access to information and realized that they were being lied to their entire lives. Appalled by the Party and in order to draw a line in the sand, they chose to quit the CCP and its affiliated organizations.”

Ms. Gao wants people to know that the Chinese regime is not equivalent to China itself. “China has a magnificent history of 5,000 years that is respected and admired by people the world over. Marxism and Leninism do not belong to the Chinese tradition; they were forced upon Chinese. When people see the evil nature of communism, they will quit it.”

She believes the reason the CCP virus has spread far and wide and caused a pandemic is because the Party tried to cover it up, putting billions of lives at risk, “We hope people can wake up and see the Party for what it is.” 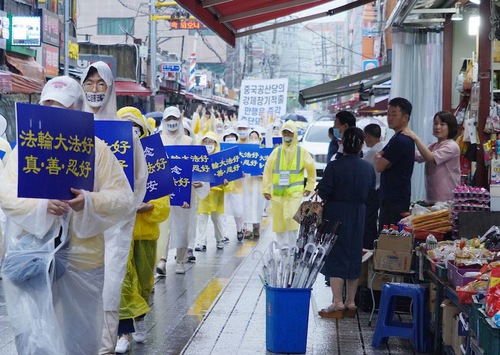 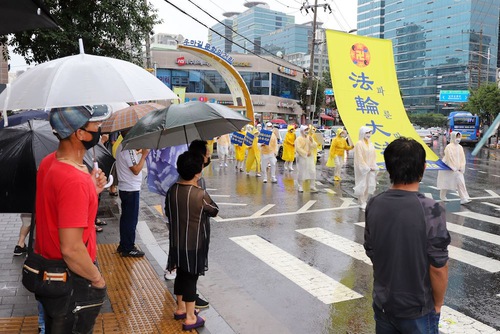 Spectators on the streets of Chinatown in Seoul enjoy watching the Falun Gong parade.

With Falun Gong’s Divine Land Marching Band leading the way, the parade took off after the rally. It was a rainy day; sometimes it drizzled and then it would be a downpour. The rain didn’t deter the practitioners and they kept their poise. The orderly parade and performances drew the attention of passersby and motorists. The police, touched by the practitioners’ determination to put on such a fantastic parade, opened up all the lanes on the road to give the parade a better flow.

One officer said, “Most people would have canceled or postponed their event after running into pouring rain. The practitioners looked determined and unshaken.” After the parade ended, an officer told the practitioners, “You must have another parade next time when the weather is good!”

64 Chinese Quit the CCP During the Parade

Some practitioners talked to Chinese who were watching the parade, and 64 of them quit that day. A Korean woman really welcomed the parade and liked the message it sent. “[The practitioners] are doing the right thing,” she said. 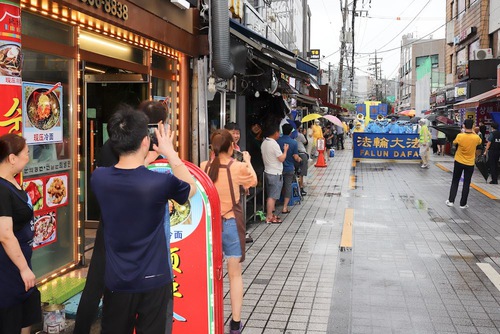 Spectators take pictures of the parade. 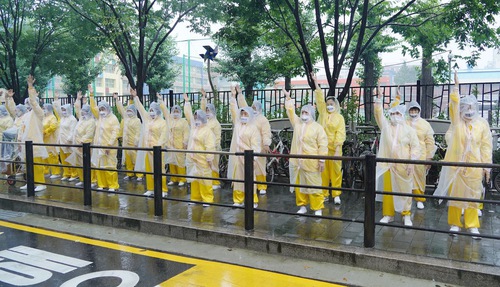 Practitioners demonstrate the five Falun Gong exercises at the end of the parade.

“Shaanxi Woman Has Been Detained Incommunicado for Over a Year”