(Minghui.org) Falun Dafa practitioners from many countries in Europe gathered in Prague, the capital city of the Czech Republic, for a parade on August 8 and a rally on August 9, 2020. Overcoming obstacles caused by the coronavirus and braving the summer heat, they came together in Prague to display the beauty of the practice and to call for an end to the persecution in China.

The parade started from the Presidential Palace and passed through the city's busy commercial district, over the historic Charles Bridge and along closed off streets in the city center to finish at Old Town Square.

The Tian Guo Marching Band led the procession, followed by a golden dragon, celestial maidens, and a Chinese waist drum group. Several sections of the parade portrayed different messages for spectators, including Falun Dafa around the world, exercise demonstrations, and the persecution experienced by practitioners in China. 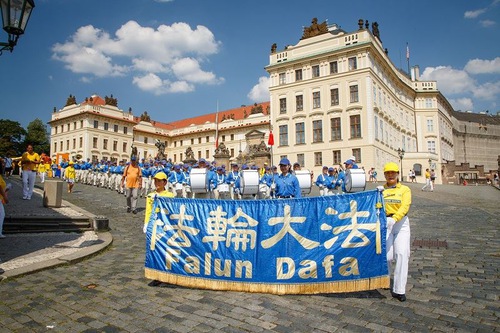 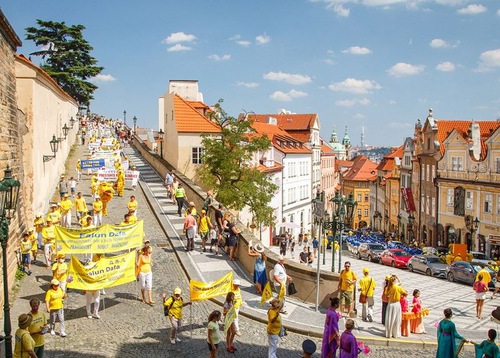 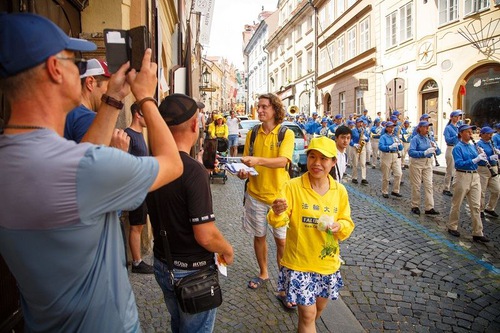 The parade passes through a busy commercial district.

Several Chinese stores were along the parade route through the commercial district, and Prague residents who were originally from China stood outside these stores taking video recordings and photos with their cell phones. A practitioner asked one of the women, “Do you like this parade?” The woman replied with a smile, “It’s great.” The woman said she had missed opportunities to see these parades in the past and was elated to catch it this time. She also said that Falun Dafa practitioners' parades are well-known by the people in Prague and that makes Chinese people feel proud.

The practitioner told the woman about the persecution in China. The woman replied, “The Chinese Communist Party is bad and only knows how to torment good people. Falun Gong is not scared of them—they (CCP officials) are scared of Falun Gong. You are spectacular, holding parades and protesting in such a busy area overseas. You expose the viciousness of the CCP.” 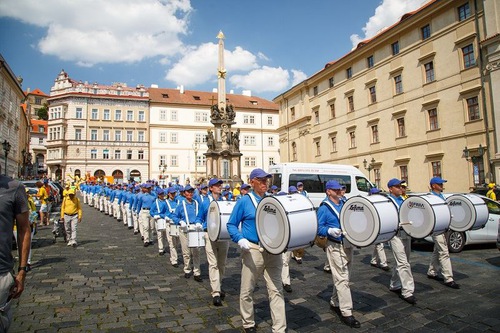 The Tian Guo Marching Band passes through closed off streets in Prague's center. 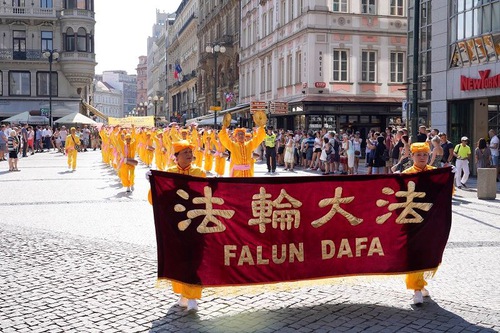 The Chinese waist drum group draws the attention of many people. 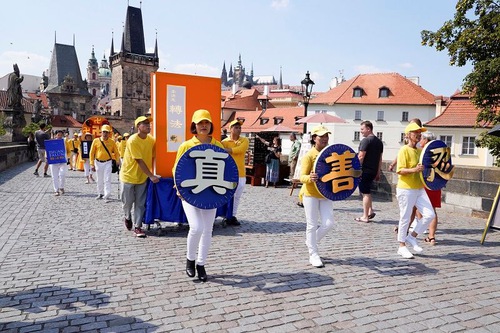 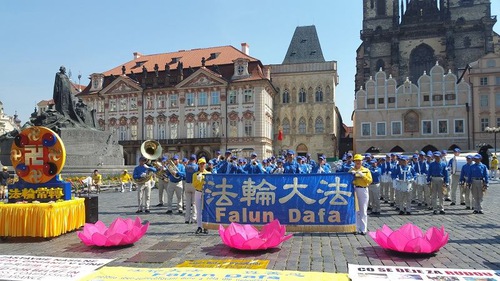 The Tian Guo Marching Band at the rally on the Old Town Square on August 9, 2020

A rally was held at the Old Town Square on August 9, 2020. Martin Samek, a practitioner from Prague, spoke at the rally. In his speech, he said that for 21 years the CCP has been brutally torturing, arresting, and taking the organs of practitioners who live by the principles of Truthfulness-Compassion-Forbearance. He said he knows more people will see through the ruthless nature of the Chinese regime and called for joint efforts to stop the persecution.

The Tian Guo Marching Band performed many songs in succession at the rally under the scorching sun. Spectators commented to practitioners that they were drawn over to the rally by the music. Many people approached the information booth to learn more about Falun Dafa and sign the petition calling for an end to the atrocities. 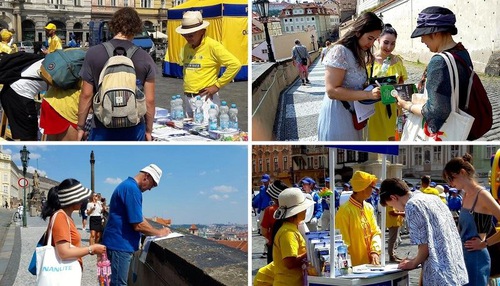 People sign the petition at the information booth to show their support.

Last year, many tourists attended the parade, but this year the number of overseas visitors in Prague, especially those from China, has dropped drastically because of coronavirus. Practitioners did still encounter some Chinese people at the square and some of these people decided to renounce their memberships in the CCP and its affiliated associations after speaking with practitioners. A mother and her daughter were among those who renounced their memberships in the CCP. They told a practitioner they had seen the parade the day before and it was very impressive.

The European Tian Guo Marching Band first debuted in a parade in Frankfurt in 2007. Over the past decade, the band has participated in cultural festival parades in major cities in Europe and national day celebrations. They have performed in major cities and famous towns, including London, Paris, Berlin, Prague, Vienna, Copenhagen, Brussels, Budapest, Bratislava, Warsaw, Lisbon, and Barcelona. Their performances have drawn attention to the persecution of Falun Gong in China, and through their music people know Falun Dafa is good.

Members of the band come from a dozen different European countries and from all walks of life. They have persevered through all these years with the band by taking hardship as part of their cultivation.

Alex and his wife Nina from Hamburg in Germany joined the band in 2011 and have performed in parades across Europe. Alex said, “I want to tell people what Falun Dafa is really like and get them to pay attention to the suppression in China. The music we play is beyond physical boundaries and ethnic groups. It shows how wonderful Falun Dafa is.”

Beatrice from France has been playing the clarinet since she was young and joined the band when it formed. She said that she found performing in the band different from other performances. Every time she played a piece with the band, she said she felt her body was cleansed and she felt a sense of joy.

Beatrice remembers feeling moved the very first time she saw the words Truthfulness-Compassion-Tolerance. She said the experience made her decide to give up the Taichi martial arts she had been doing and become focused on practicing Falun Dafa. She said the teachings of Falun Dafa are profound. While playing with the band, which is comprised entirely of Falun Dafa practitioners, she saw a huge energy field emitted from the music. The experience made her treasure her opportunity to be part of the band even more.

You Bring Hope to this Place 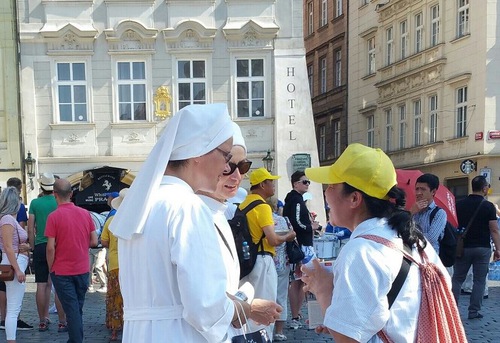 Two nuns chat with a practitioner.

Two nuns dressed in white stood in the Old Town Square listening to the music performed by the Tian Guo Marching Band. One of the nuns flipped through a Falun Dafa brochure and started to chat to a practitioner. She said the music was extraordinary and divine. When the practitioner told the women about Falun Dafa, they said they now understood why the music made people feel uplifted. They also spoke to the practitioner about the devastation that coronavirus had wrought and said that the Falun Dafa practitioners’ performance had brought hope to this place.