Frankfurt, Germany: People from All Over Sign a Petition to Condemn the Persecution

(Minghui.org) Falun Dafa practitioners held activities in the renowned Paulsplatzin, the heart of Frankfurt, on August 8, 2020. That evening they held a candlelight vigil in the city’s busy shopping mall area to inform people about the persecution in China and to commemorate the practitioners who were tortured to death.

Frankfurt, the largest city in central Germany, is a commercial, cultural, and transportation hub and is rated an “alpha world city.” People originally from more than 180 countries call the city home. Practitioners in Frankfurt have been holding activities to raise awareness of the persecution in the city center every week for many years. 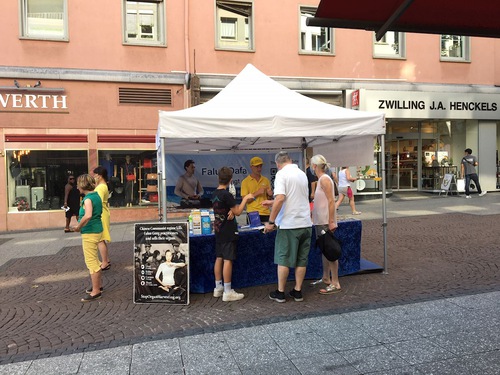 A couple sign the petition calling for an end to the persecution. 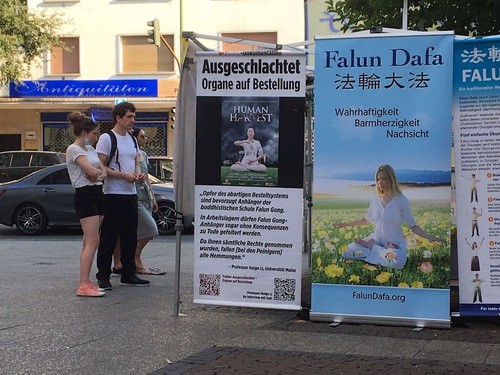 Passersby stop to read the information. 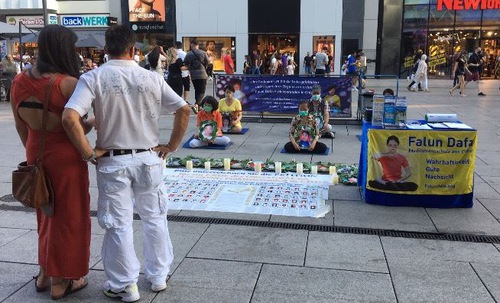 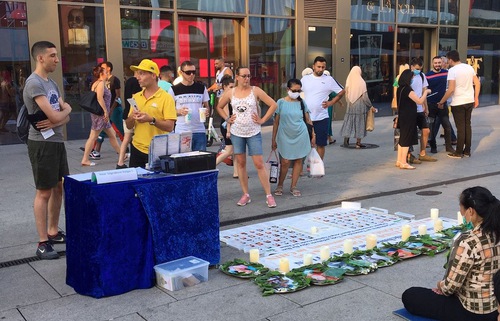 People stop to learn more about Falun Dafa during the candlelight vigil.

Jamic and Larry from California took a brochure and asked if anyone spoke English. They had never heard of Falun Dafa. A practitioner explained that Falun Dafa is a form of cultivation and that it was first taught publicly in China in 1992. Today there are hundreds of thousands of practitioners in more than 100 countries. Their health has improved and they learned to be better people through the practice. But the Chinese Communist Party (CCP) was fearful of its popularity and began to persecute it in 1999.

The couple were shocked to learn how terrible the persecution is. They said, “Everyone knows the CCP is a cruel regime. More and more Americans are beginning to see its true colors.”

Larry said, “We have always been against communist ideology. Its followers advocate terrorist tactics and fearmongering.”

Jamic said, “The CCP lied and caused the coronavirus to spread worldwide. So many people have died in America.”

They pointed out that the Trump administration has recently taken measures against China. When they learned they could sign a petition to show their support, they said, “Of course we support you!” and signed their names. 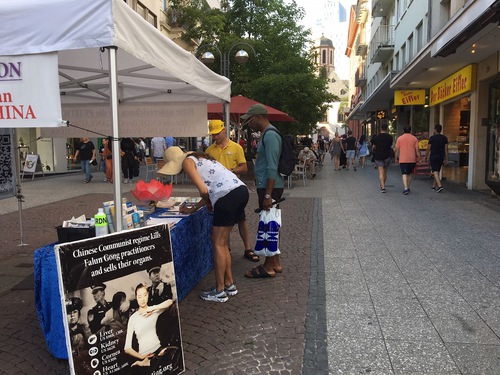 “What You are Doing Is Very Important”

As three young people walked past the Falun Dafa information booth, one of them, stopped to read the display board that said, “The CCP is taking organs from Falun Gong practitioners.” There was an image of police officers arresting people as well as a price list for human organs.

A practitioner told them that the CCP has been persecuting people who live by the principles of Truthfulness, Compassion, and Forbearance for 21 years. Even today, the Party sanctions removing the organs from practitioners and other prisoners of conscience and selling them for a profit. Dink, who is from Vietnam, said, “I know how evil the CCP is.”

Dink explained that his parents escaped to Germany from North Vietnam during the Vietnam war (1955 to 1975). He was born in Germany but he learned a lot about the persecution from his parents. He also read about it all, which helped him gain a better understanding of the regime’s crimes against humanity. When told about organ harvesting, he said, “I am not surprised. I know the CCP will do things like that. I read about the 1989 student massacre and know how they killed the students ruthlessly.” 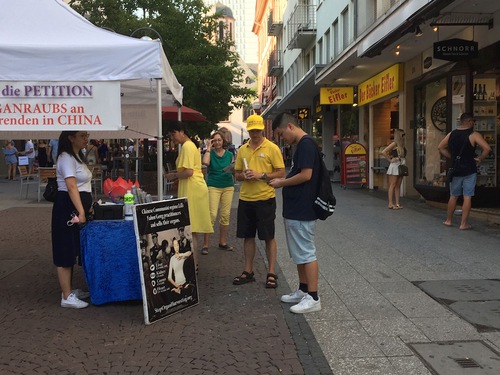 Dink (first on the right) reads the pamphlet on organ harvesting.

Dink’s two companions walked on, but he stayed and talked to practitioners about the persecution. He signed the petition to end the persecution. “What you are doing is very important. I wish you all the best,” he said.

After a young man read the information for a long time, a practitioner handed him a pamphlet. The man, Monit Naresh, is from India and was holidaying in Germany. He said that the huge banners had drawn his attention and he had not heard of Falun Dafa before.

He was shocked to learn how brutally the communist regime abuses people and asked, “Why is the CCP persecuting people who practice Falun Dafa?” When the practitioner explained that the CCP does not tolerate spiritual beliefs, Monit said, “It is very meaningful that you are telling people about these crimes. I believe you will succeed. Justice will prevail.” 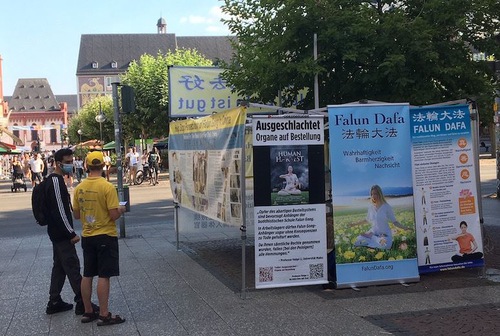 Locals Want to Learn the Exercises

One of two locals who took brochures said, “Oh, this is Falun Dafa. I want to learn.” They looked for more information at the table and were given a postcard with practice site addresses and phone numbers on the back.

The man said he had been doing a form of meditation for many years and expressed a sincere interest in learning Falun Dafa. 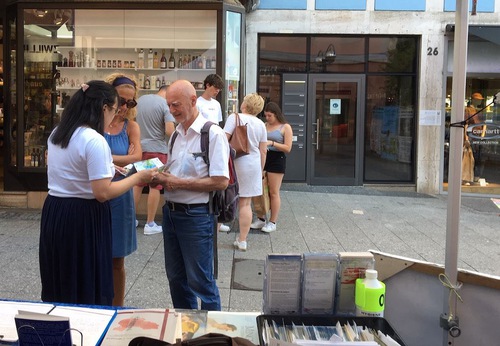 Two people hear about the persecution.

The man came to the park the next day to learn the exercises. He was taught all five exercises and did the sitting meditation for one hour. He said he plans to come back.

Woman from China Signs the Petition

A woman from China stopped to chat to a practitioner for over half an hour after she noticed the candlelight vigil. She works in the tourist industry and recently lost her job. She knew the virus originated in China and said she resented everyone from China.

The woman thanked the practitioner for explaining things to her and said she would stop resenting all Chinese. She signed the petition to end the persecution.