(Minghui.org) My wife and I started practicing Falun Dafa in 2001. I had a very traumatic life prior to practicing Dafa, and I surely would not have survived until now if Teacher Li (Falun Dafa's founder) had not been watching over me.

However, I have not been able to overcome all the attachments that resulted from those traumas, and many times I have not met the standards of a Dafa cultivator, especially during conflicts. This strengthened my already existing attachments to guilt and shame, which I have been working on eliminating. But recently, I have experienced two examples of Teacher’s miraculous encouragement.

Prior to about a year and a half ago, I practiced with my celestial eye open. In Zhuan Falun, Teacher said:

“With Wisdom Eyesight, you do not have the ability to see things through a wall or see through a human body, but you can see the scenes existing in other dimensions. What benefits does this have? It can enhance your confidence in the practice. When you indeed see something that everyday people cannot see, you will think that it certainly exists.” (Lecture Two,  Zhuan Falun)

Teacher had given me this ability to strengthen my confidence. But due to my own deficiencies, it eventually became a source of interference, and I asked Teacher to close my celestial eye about a year and a half ago, which he did. Teacher also said:

Without seeing, I now find it easier to improve both my resolve and faith.

I went to a laundromat to do the wash in April. During that time, I was experiencing a lot of regret about not having done better over the years. When I was leaving the laundromat, a lot of energy filled the upper-left portion of my head, especially around my left eye.

My first thought, was, “Oh, what did I do wrong?” As I approached my car, I noticed that something wasn’t right with my vision. I looked at the car windows as I walked by, and it appeared as if a wave of liquid glass was moving across them. When I sat in the car, I noticed a rectangular distortion in my left eye. It was as if the glass and images within the rectangle were slightly enlarged. Eventually, I closed my eyes to see what would happen.

With my left eye, I saw the rectangle very clearly. It had jagged edges, but it also had multicolored trim around the edges that was filled with symbols that looked somewhat like Chinese characters and somewhat like mathematical symbols. The inside of the rectangular shape was completely black. After a little while, I thought, “I wonder if it is a portal?”

In my mind, I moved through the black center and was instantly surrounded by bright, white light. And there was Teacher in the white clothes that he had worn in the pictures of him demonstrating the postures for sending forth righteous thoughts. He was smiling warmly, and two beautifully dressed Boddhisattvas were with him. I stayed for a little while, just looking, but I understood that I was not to dwell there, and I backed out of the portal. By the time I reached home, which was only a few minutes away, the extra energy in my head had dissipated, and the vision in my left eye was back to normal.

Teacher had given me at least three reminders: 1) To be more diligent about sending righteous thoughts and to do so more often; 2) That he was right beside me, with just a thin veil between our realm and his fashen (law body); and 3) To continue eliminating guilt and regrets. And he gave me this grand experience while still honoring my request to keep my celestial eye closed! He had temporarily transformed one of my physical eyes.

Last Sunday, my wife, with a big smile, asked me to get my reading glasses. Once I had them, she took me outside to the small garden in our backyard and told me to look closely at one of the shoots of a potted chive plant. There they were—ten Udumbara flowers. 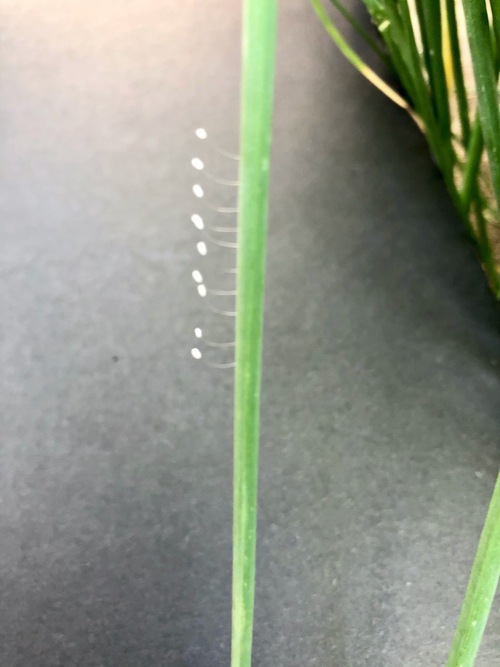 My wife has a much steadier and calmer mind and personality than me, and she has done particularly well lately in validating the Fa. I have no doubt that the appearance of the flowers was mostly about her, especially because she was the one who found them. She generously asserts that it was for both of us, because we are in the same household, and perhaps the miracle did contain a bit more encouragement for me, too. When I contemplated the situation, I remembered that I had properly disposed of a Shen Yun wall calendar not long ago, but I’d kept the picture of the dance depicting Udumbara flowers to frame and hang in my office.

I am so grateful to Teacher for both of these divine encouragements.