(Minghui.org) Today's news from China includes incidents of persecution that took place in 13 cities or counties in nine provinces, where at least 33 practitioners were recently persecuted for their belief. 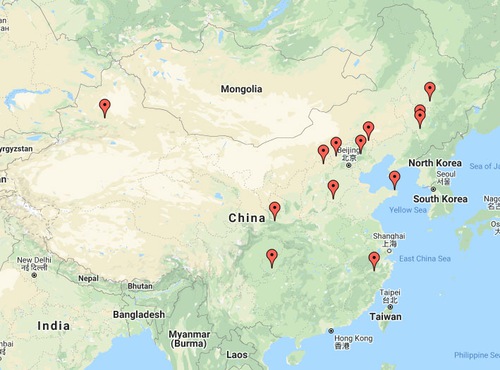 Mr. Zhou, about 70, Ms. Wang, Ms. Shen, and another practitioner were arrested on June 18, 2020. Their computers, Falun Dafa books, and photos of the founder of Falun Gong were confiscated.

Ms. Zhao Huairong was tried via video-link by the Chengde County Court on the morning of June 16, 2020. Only two of her family members were allowed to attend the trial. No verdict was announced.

Ten practitioners from the Xiangfang District in Harbin City were arrested by officers from the Longnan Police Department, Daqing City, between April 7 to 8, 2020.

They are all being held in the Zhaozhou Detention Center in Daqing.

Mr. Cheng Defu, 73, from Guixi Town, Dianjiang County, was arrested at home by officers from the Dianjiang 610 Office and the Domestic Security Division on March 7, 2020, for sending several public documents including the “Constitution” and “Notice of the Ministry of Public Security on several issues” to the neighborhood committee officials.

During the arrest, the officers confiscated 3,300 yuan in cash, a computer, and an audio player. Mr. Cheng was beaten at the police department. Two of his teeth were knocked out as a result.

Domestic Security officers took him to hospital for a checkup. He was released after failing the physical exam.

Mr. Cheng's case was turned over to the Nanchuan District Procuratorate on June 15.

Ms. Shi Mengqiao from Tangxian Town, Yongkang City, was arrested in February 2020 for distributing Falun Gong informational materials. She was indicted by the Wucheng District Procuratorate, and is due to be tried in early July.

Mr. Mi Zhiquan’s home was later ransacked while no one was at home. The officers confiscated his Falun Dafa books.

Mr. Yu Shuangji and his wife Ms. Gao Xiangdong from Zhangcun Town in the Huancui District were arrested at their home by Qin Xiaodong and other officers from the Huancui Domestic Security Division and the Shuangdao Police Station on the morning of June 18, 2020. Photos of the founder of Falun Gong, Falun Dafa books, a printer, computer, 2,000 yuan in cash, and 400 yuan in paper bills with Falun Gong information printed on them were confiscated.

Blood samples were forcibly taken from Ms. Gao at the police station. She refused to sign any of their paperwork. She was given a 15-day detention to be served at home, and was fined 1,000 yuan.

Mr. Yu and Ms. Gao were released later that afternoon.

Ms. Liu Jie and Ms. Li Guijun were arrested by the deputy head of the Yitong County Domestic Security Division Hu Baoming, and other officers on the morning of June 20, 2020. Their homes were ransacked.

Ms. Liu and Ms. Li were taken to the Siping City Detention Center.

Mr. Qiao Yuejun from Lingqiu County was recorded on surveillance cameras when he was distributing Falun Gong materials in Hongshileng Township on June 15, 2020. He was arrested by officers from the Hongshileng Police Station. His home was ransacked, and a computer and tablet were confiscated.

Mr. Qiao was taken to the Domestic Security Division, and released after 7 p.m. that evening.

Mr. Xu Zhenqing from Wangjiadian Township in the Songshan District was arrested at home on June 19, 2020. His residence was ransacked. His whereabouts are unknown.

Mr. Yue Sheguo from the Yongnian District was arrested in Xinzhuangbao Village by officers from the Guangfu Town Police Station on the evening of June 14, 2020, for distributing informational materials about the global pandemic. He was detained on June 17.

Ms. Pan Yanchun, 50, from the Ganjingzi District was arrested on May 9, 2020, for distributing Falun Gong materials. She is being held in the Shihezi City No. 1 Detention Center.