(Minghui.org) As the spread of the Chinese Communist Party (CCP) virus (the virus that causes Covid-19) slowed down in Switzerland in June, the government gradually unwound the lockdown. On June 22, 2020, Falun Dafa (also called Falun Gong) practitioners in Switzerland resumed their Information Day events at Schwanenplatz in Lucerne.

No longer packed by tourists, there are more local residents out on the streets. Many people read the display boards, took a flier, or chatted with practitioners. Some had already heard about the CCP's crime of organ harvesting from prisoners of conscience, and did not hesitate to sign a petition calling on the Swiss government to help end the persecution of Falun Gong in China. 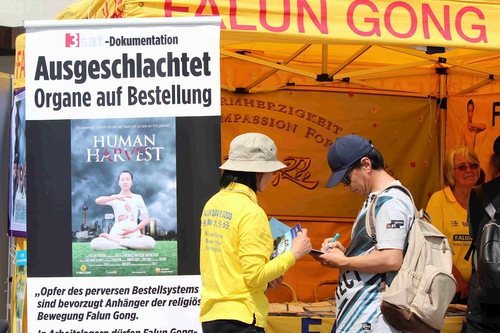 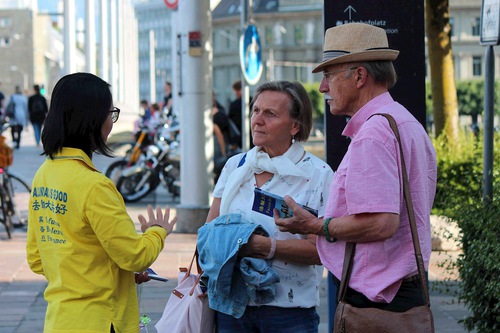 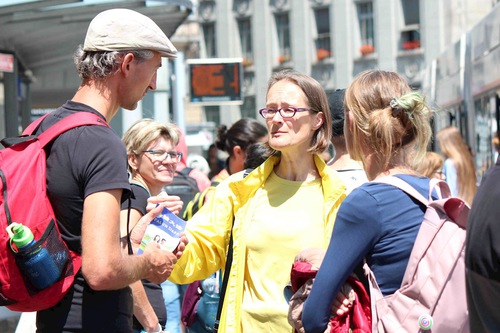 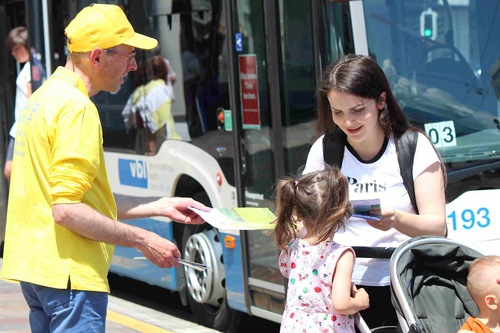 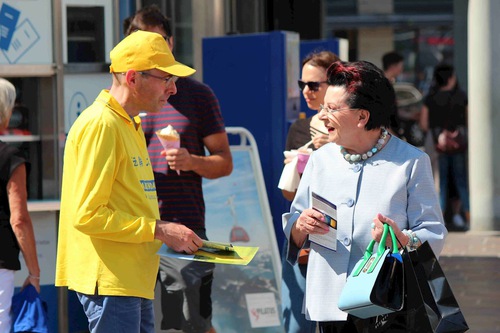 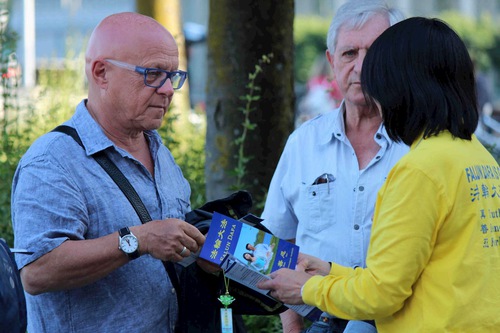 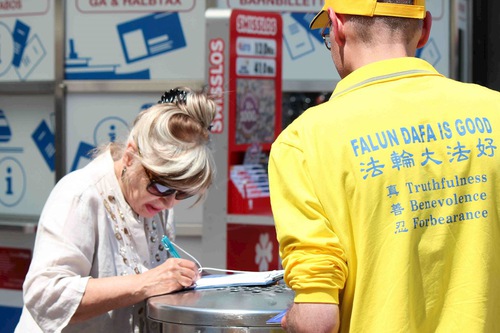 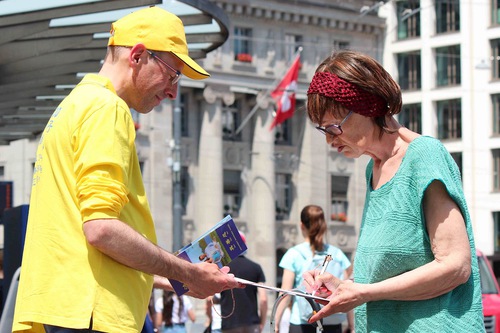 Signing a petition opposing the persecution of Falun Gong in China 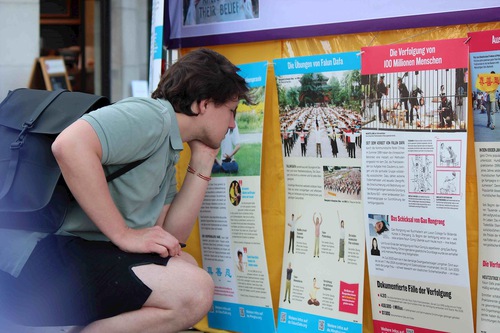 Beate Meier learned of the persecution of Falun Gong and the state sanctioned organ harvesting in China two years ago during an earlier Information Day event at Schwanenplatz.

“I was so surprised when I heard of it,” she said. “I was shocked and speechless. Our media usually doesn’t report this kind of information. I have been signing petitions to support Falun Gong ever since,” Ms. Meier said.

She believes that the crime must be stopped, and added, “We ought to work together to stop this [organ harvesting from living Falun Gong practitioners and other dissidents]. Perhaps some people are afraid of being jailed, but we still have to take the first step.”

Ms. Meier had shared the information with her three children, and they all expressed their opposition to harvesting organs from living people. “I hope children will learn the truth. They are our future,” she said. “Never give up hope. Be brave and continue the peaceful protests and signature drives. Decades ago in East Germany, we peacefully protested. At first the situation was bad, but it turned better in the end.” 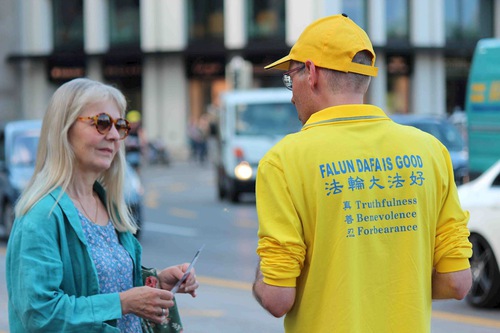 Monika Gegenschatz, a retired entrepreneur, has stopped at previous Information Day events before, and had signed a petition calling for an end to the persecution. Today, she asked a practitioner to update her on the current situation. She said, “Falun Gong promotes peace, health and dignity. They [Falun Gong practitioners] don’t force anyone. If you wish to learn, they will tell you the information. I think it’s important to let people know the truth.”

Ms. Gegenschatz added, “I wish our government would stop the lip service, claiming that they had raised the human rights issue with the Chinese government. I wish they could do something more effective like, ‘If you [CCP] don’t change, we will stop investing in China or we will stop providing you the resources.’”

High school senior Sabrina from Zurich was on a day-trip to Lucerne. Her mother had watched some videos online of Master Li Hongzhi introducing Falun Dafa and was interested in learning the practice. When Sabrina saw the Information Day event in Lucerne, she asked as to where they could learn the practice in Zurich.

“I think (Falun Dafa) is really good. I want to try it,” she said. “I hope my signature can help end the persecution, so people in China can also freely practice such a beautiful exercise.”

Communications Expert: “The Swiss government should stay away from the Chinese Communist Party” 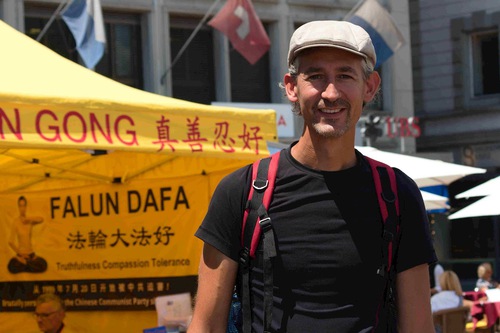 Communications expert Daniel Wiegger said that this was the first time he'd heard about Falun Gong. He talked with a practitioner for a long time to learn more about the practice and the persecution in China. After signing the petition, he said that the Swiss government should stay away from the CCP.

Mr. Wiegger remarked, “The Swiss government should no longer depend on China economically. They should consider people and lives instead of money. I wish our federal government would treat this matter seriously.”

Sonam, a Tibetan in Switzerland, had heard of Falun Gong from the media. When he saw the Falun Dafa information table, he immediately signed the petition calling for an end to the persecution. He said that freedom of belief is very important, but people in China don’t have that freedom. “Falun Gong is a belief. They are treated the same as Tibetans. We must support each other,” said Sonam.

“Reflecting on My Cultivation at SOH Radio”