(Minghui.org) Today's news from China includes incidents of persecution that took place in 14 cities or counties in ten provinces, where at least 35 practitioners were recently persecuted for their belief. 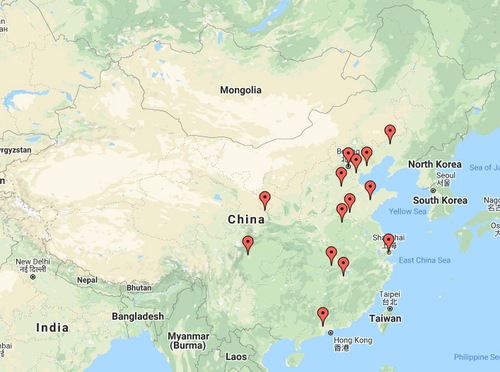 Ms. Zhang Shuhe from Daxu Village, Wangjiajing Town was taken to the Shijiazhuang Women's Prison on April 15, 2020. Her family was unaware until they were notified by prison officials that she had been sentenced to a two-year term.

The Xihu District Court has scheduled a second hearing via video-link for Ms. Jiang Lanying, Ms. Zhang Li, Ms. Hu Shuiying and two other practitioners for the morning of July 7, 2020.

Mr. Zhang Weiqing was arrested on April 20, 2020, and is being held in the Chibi City Detention Center.

Ms. Bai Xiuhua was arrested at home by Cui Haifeng, head of the Zhangwu County Domestic Security Division, and other officers on the morning of July 2, 2020. They took photos and confiscated the book Zhuan Falun and photos of the founder of Falun Gong.

Ms. Bai was taken to a police station and later released.

Ms. Lin Qiupeng, 75, from the Minhang District was officially arrested by the Changning District Procuratorate on July 3, 2020.

Officers from the Shijingshan District 610 Office and the Bajiao Police Station broke into Ms. Ma Jinjie’s home and ransacked the place on the morning of March 24, 2020. They confiscated Falun Dafa books, photos of the founder of Falun Gong, and over 200 printed materials.

Ms. Ma was taken to the police station, where she was handcuffed to an iron chair for a day and a night. She underwent a physical examination, which showed very high blood pressure. She was released the following day.

A practitioner with the last name Pan, about 60, was followed and arrested on July 1, 2020. Police ransacked Pan’s home and confiscated Falun Gong materials and keepsakes. Pan was released on July 3.

Various police stations in Liangshan County called and harassed Falun Gong practitioners and their families. They went to practitioners’ homes, asked if they still practiced Falun Gong, and videotaped them while they gave answers. They also told practitioners’ family members to send in video recordings of answers given by practitioners.

Practitioners who were subjected to this form of harassment include Ms. Zhao Guihua and Ms. Wang Guirong.

The Kuiwen District Court scheduled a trial for Mr. Zhang Zhao via video-link on July 28, 2020.

Two officers from the Guangming Police Station in Zhihe Town went to Ms. Zhang Yinglu’s home and harassed her on July 1, 2020.

Officer Hu Benqi and another person broke into the homes of Ms. Hu Zhangqiong, Mr. Hu Yiying and Ms. Wang Suqing in Guansheng Village, Sanjie Town, and harassed them on July 3.

Wang Chenxi from the Sanjie Police Station, another officer, and Deng Li from the Hongjia Village Committee went to the homes of Mr. Zhang Zuyi, Ms. Zheng Sufen, Mr. Hu Changqi, and Ms. Wu Qingxiu and harassed them at a little past 1:00 p.m. on July 3. They took photos of their homes.

When Ms. Chen went there, a person responsible for the case informed her that she was being charged with distributing Falun Gong materials and helping people renounce their memberships in the Chinese Communist Party and its youth organizations.

She was told to sign documents and was fined 2,000 yuan. The case handler told her to go home and wait for notification of her trial date.

Officers from the Caiyuan Town Police Station went to Mr. Han Yalin’s home on June 21, 2020. They told him and his wife that the police would remove their names from the online blacklist if they stopped practicing Falun Gong. They also wanted to videotape the couple making the statement. The couple refused, and the officers left.

Officers went to Ms. Han Xiuqin’s home in Zhangjiayao Village on June 21. They demanded that she give up Falun Gong and write a guarantee statement.

Ms. Liu Peiwen from Xuanjiawa Village was harassed by officers on June 22.

Ms. Sun Xiuli from Heilongjiang Province works at the Tianshangde Shopping Center in Guangzhou City, Guangdong Province. She was arrested on the morning of July 3, 2020.

Her sister Ms. Sun Xiuxia and niece Ms. Yu Hui, both practitioners, lost contact with other practitioners at the same time.

Ms. Chen Chunyan was arrested by the Zhecheng County police and Domestic Security officers in December 2019. She was released on bail in April 2020 but was taken into custody again.

Two agents from the Pudong New Area 610 Office, a residential police officer from the Hudong Police Station, and a staff member of the Hudong New Village Neighborhood Comprehensive Management Office tried to force Ms. Zhou Lin into writing a guarantee statement at the residential committee on July 1, 2020. She refused.

Ms. Chen Shuqin, a doctor, was arrested at home by Wang Shengqiang and others from the Longde County Domestic Security Division on March 7, 2020. Her home was ransacked. She was released on bail.

Ms. Chen was officially placed under arrest by the Longde County Procuratorate on June 22 and is now being held in a detention center.

“Shanghai Woman Sentenced for Her Faith, Family Not Allowed to Attend Trial”