Government officials, experts, and others came to express their support during the activities, which included a peaceful protest and a candlelight vigil at the Chinese Embassy and a video conference titled, “Understanding the Chinese Communist Party: Lessons for the Free World.”

Protest, Group Exercises, and Candlelight Vigil at the Chinese Embassy 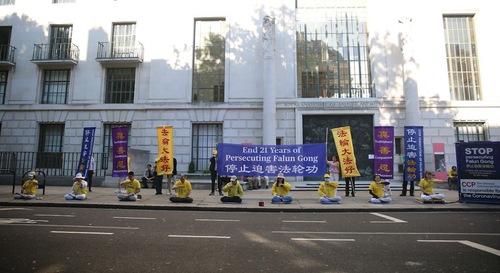 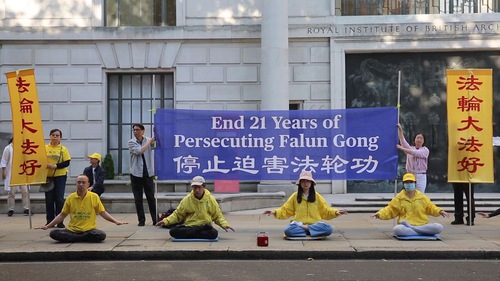 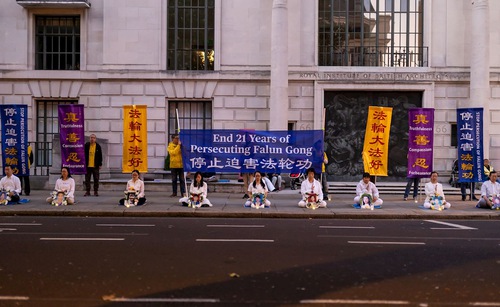 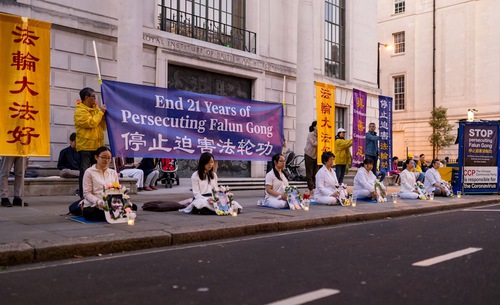 A candlelight vigil at the Chinese Embassy in the evening

The peaceful protest in front of the Chinese Embassy has continued for 18 years. More practitioners joined the protest on July 20, rotating in small groups to comply with the government's distancing orders due to the coronavirus pandemic.

As dusk quietly fell on London, practitioners held a candlelight vigil to commemorate fellow practitioners who’ve died in the persecution.

Holding a gently flickering candle, Xiaotong's thoughts were on China, where her mother is still serving a three-and-a-half-year prison term for having a Falun Dafa flier.

Beside her sat Ming-hui, whose father was recently released from prison after 15 years for unfurling a banner with the message, “Falun Dafa Is Good.” Ming-hui phoned him many times but could seldom speak to him without being cut off by the CCP censors. 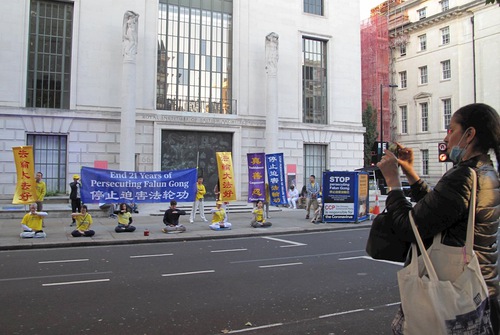 Danilla takes video footage of the protest on her phone to share with her social media friends.

Danilla lives near the Chinese Embassy and sees practitioners protesting there every day. “A peaceful protest for 21 years! It’s amazing and I am humbled. We must let more people know. It’s important!” she said.

Danilla read the display boards and signed a petition to end the persecution. “This persecution is absolutely wrong! Every conscientious person should support Falun Dafa, stop the persecution, and stop forced organ harvesting!” she added. 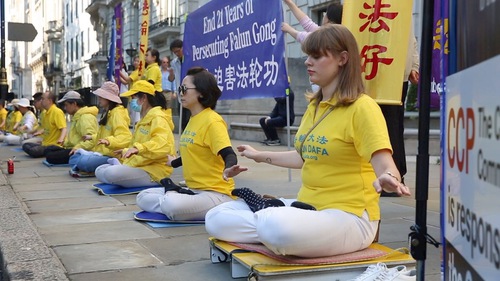 Yulia started practicing Falun Gong three years ago. She wants the world to know how wonderful Falun Dafa is and how terrible the CCP is. Seeing how the communist regime has brainwashed generations of Chinese upset her, but she is happy to see that more people have realized the danger of siding with the Party. 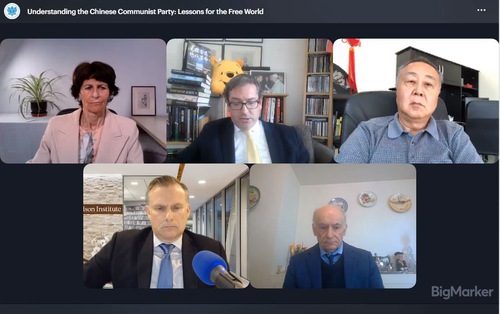 The Falun Dafa Association of the UK also held a video conference on July 20. The conference was hosted by Rosemary Byfield, a representative of the association. In her opening remarks, she spoke of the systemic persecution of Falun Gong and the inhuman tortures that practitioners have suffered during these 21 years. She recommended a new Minghui publication, The 20-Year of Persecution of Falun Gong in China.

Using evidence collected during his investigations since 2006 of the crime of forced organ harvesting in China, David Matas reminded the audience that the CCP has no bottom line and that its cover-ups are systematic. He noted that the CCP has already extended the persecution and coercion to foreign countries, something very important for the international community to recognize and resist. 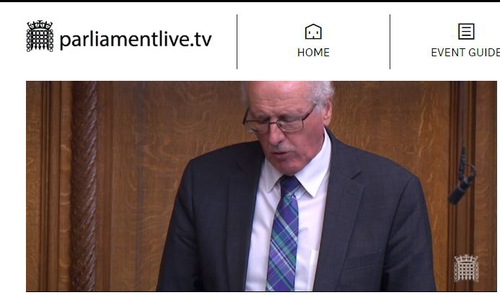 MP Jim Shannon speaks in Parliament, urging the government to pay attention to the ongoing persecution of Falun Dafa. In his response, Minister of Foreign Affairs Raab also expressed deep concern over this matter.

Six hundred and six legislators from 30 countries signed a joint statement on July 18, 2020, condemning the 21 years of “systematic and brutal” persecution of the peaceful spiritual discipline of Falun Gong and calling for the Chinese Communist Party to stop the persecution immediately.

The Inter-Parliamentary Alliance on China (IPAC) issued a statement On the twenty-first anniversary of the persecution of Falun Gong on July 20 that said, in part, “We remind the world of the depravities they continue to suffer and urge the world to stand up and speak out for an end to such repression, an end to impunity, and for justice, accountability, human rights and human dignity for all the peoples of China.”

“Taiwan: Officials at Commemorative Events in Kaohsiung Call for the Persecution to End”

“Spain, Netherlands: Activities Call for an End to 21 Years of Persecution”