From Persecution of Falun Gong to Coronavirus Cover-up, Many Have Learned to Stand Up to the Chinese Communist Party

(Minghui.org) The year 2020 has been unusual for China and the rest of the world. Starting with the coronavirus outbreak, the world witnessed how consistent cover-up by the Chinese Communist Party (CCP) led to a global pandemic. So far, the disease has caused more than 16 million infections and over 640,000 deaths.

Wary of the harm brought about by the CCP, many countries have awakened to the CCP's brutality and lies, as well as its immediate threat to freedom. Among the many crimes committed by the CCP, the recently enacted National Security Law in Hong Kong was the latest evidence, while the persecution of Falun Gong is probably the worst human rights violation over the past two decades.

Falun Gong, also known as a Falun Dafa, is a meditation system based on the principles of Truthfulness-Compassion-Forbearance. Since July 1999, the CCP has targeted about 100 million practitioners with detention, imprisonment, torture, psychiatric abuse, and forced organ harvesting.

Aside from the harsh physical abuse, the CCP has also subjected practitioners to intensive brainwashing in attempts to force them to give up their faith. In addition, news media and the education system were mobilized nationwide to defame Falun Gong, with propaganda turning a large number of Chinese against innocent Falun Gong practitioners and the principles of Truthfulness-Compassion-Forbearance.

Realizing the severity of the persecution, over 600 leaders from about 30 countries recently issued a joint statement on July 18 calling for an end to the persecution. The United States, in particular, has shown its support of Falun Gong practitioners in its religious freedom report and recent State Department announcements.

As nearly 200 countries continue to suffer from the coronavirus pandemic, China has experienced losses caused by flooding, locust plague, and other disasters. Given this situation, quitting the CCP organizations inside China and rejecting the CCP in the international community will benefit our society for the long term.

Support from Over 600 Officials in 32 Countries

July 20, 2020, marked the 21st anniversary of the persecution of Falun Gong. The list of 600 signatories, available from the Falun Dafa Information Center, consists of current and former ministers, as well as legislators at the national and provincial levels.

Among the signatories are 28 U.S. Senators and House Representatives. “Thank you for the kind invitation to participate in this years’ virtual Falun Gong rally,” stated Representative Jaime Herrera Beutler from Washington State, “I would like to express my most sincere support for the practitioners of Falun Gong. Let’s take a moment today to reflect on the persecution and those still suffering from the tyranny of the Chinese Communist Party (CCP).”

Separate from the statement, the U.S. State Secretary Michael Pompeo issued a statement on July 20 urging to stop the suppression against Falun Gong in China. Similarly, U.S. Mission Geneva also tweeted the following in support, “On this day 21 years ago, the PRC pledged to eradicate the practice of Falun Gong. Today, we stand with this peaceful religious community and call for the release of the thousands unjustly imprisoned for their beliefs.”

Since July 2015, over 3.65 million people from 37 countries have signed criminal report forms directed at China’s Supreme Court and Supreme Procuratorate to call for the prosecution of former CCP leader Jiang Zemin for ordering the persecution of Falun Gong. In Canada, a list of human rights violators was recently submitted to François-Philippe Champagne, Minister of Foreign Affairs, calling for an investigation of their roles in the persecution of Falun Gong and measures to be taken against them based on the Canadian Magnitsky legislation.

As the world yielded to the CCP, allowing it to push the communist ideology and other lies globally, the entire world suffers. The coronavirus pandemic is one example. Li-Meng Yan, a Hong Kong virologist who fled to the United States in April, said the CCP knew about coronavirus in December 2019, but chose to withhold the information.

The CCP influence also extended to Hong Kong. When Dr. Yan heard from her medical professional friends in mainland China about the human-to-human transmission on December 31, 2019, she notified her supervisor, but was told to keep quiet. As the situation in mainland China deteriorated, her friends said, “We can’t talk about it, but we need to wear masks.” She tried again telling her supervisor about this. “Keep silent and be careful. Don’t touch the red line,” the supervisor replied, “[Otherwise] we will get in trouble and we’ll be disappeared.”

Right now, the pandemic has infected nearly 200 countries. From July 13 to July 17, about one million infection new cases were identified in those four days alone. During a recent interview, Dr. Yan said, “I also want the U.S. people to understand how terrible this is. It is not what you have seen ... This is something very different... We don't have much time.”

Inside China, flooding has been threatening people's safety when the coronavirus pandemic is still out of control in certain places. Twenty-seven provinces are experiencing flooding including the Yangtze River and Huai River regions. China’s Ministry of Water Resources said that since June there are 433 rivers with water levels higher than alert limits. Among them, 33 have unprecedented high water levels. 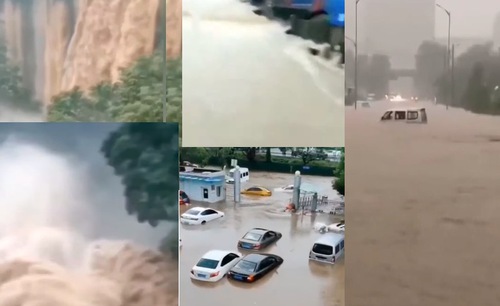 Flooding occurs in many places of China

The Three Gorges Dam, a costly political project in China that was once claimed to protect the Yangtze River region from flooding for 1,000 years, has been reported to discharge water numerous times recently, making the downstream areas even more vulnerable to flood damage.

The CCP did not learn its lesson from the pandemic or flooding. Instead it ramped up its efforts to force a National Security Law on Hong Kong.

These serious actions have made world leaders more clear on the CCP’s damage to our society. FBI Director Christopher Wray recently spoke at the Hudson Institute in Washington, D.C. on July 7 that “it’s the people of the United States who are the victims of what amounts to Chinese theft on a scale so massive that it represents one of the largest transfers of wealth in human history.”

For example, in 2017 the Chinese military hacked Equifax and stole the sensitive personal information of 150 million Americans. With situations like that, the FBI is opening a new China-related counterintelligence case about once every 10 hours.

To achieve its goals of surpassing America and dominating the world, the CCP often steals American intellectual property and then uses it to compete against the very companies it victimized.

From talent recruitment programs like the so-called Thousand Talents Program, to military as well as non-state hacking, from data theft for artificial intelligence gathering to targeting key platforms as “consulting services”, “all of these seemingly inconsequential pressures add up to a policy-making environment in which Americans find themselves held over a barrel by the Chinese Communist Party.”

Wray also emphasized that he was not talking about Chinese people—who have contributed significantly. “When I speak of the threat from China, I mean the government of China and the Chinese Communist Party,” he explained, “China has a fundamentally different system than ours—and it’s doing all it can to exploit the openness of ours while taking advantage of its own closed system.”

The World Health Assembly (WHA), the decision-making body of the WHO, adopted a resolution in late May that calls for impartial evaluation of responses to the coronavirus pandemic. Proposed by Australia and other countries, this initiative has been supported by 122 countries, as reported by The Guardian on May 18 in an article titled “Australia hails global support for independent coronavirus investigation.”

Australia is one of the earliest co-sponsors, and its foreign minister Marise Payne said the resolution includes the three main elements his government had sought. That is, the review should be “impartial, independent and comprehensive.”

A New York Times article on July 17 discussed the possibility for the U.S. Government to ban the CCP members from entry. Although considered by some as a new initiative, it is actually a continuation of the thirty-year long decommunization movement that started over 30 years ago.

As communism collapsed in Eastern Europe in 1989, laws were passed in numerous countries to investigate communism members. One law from the Czech Republic in October 1991 banned all employees of the StB, the Communist-era secret police, from designated public offices.

Similar actions were taken in other countries. Germany has a federal agency known as the Stasi Records Agency that is dedicated to preserving and protecting the archives and investigating the past actions of the former East German secret police. Following the first lustration bill in 1992 and a new law in 1996, the lustration was handled by the office of the Public Interest, which was later replaced by the Institute of National Remembrance.

After the Nine Commentaries on the Communist Party was published in 2004, over 360 million Chinese have renounced their memberships in the CCP and its youth organizations. The recent rejection by Western countries makes many Chinese people eager to separate themselves from the regime, said Global Service Quitting the CCP (Tuidang) Center coordinator Yi Rong.