(Minghui.org) Falun Gong practitioners held activities in downtown Munich on July 17, 2020, marking the 21st anniversary of peacefully protesting the persecution. They clarified the facts to passersby and demonstrated the exercises.

Many people stopped to watch the exercise demonstration and talk with practitioners. They could not understand why the Chinese Communist Party (CCP) persecutes a peaceful meditation group. 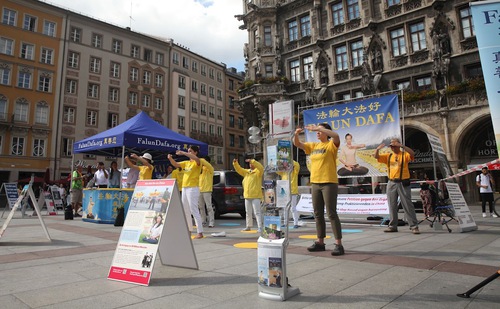 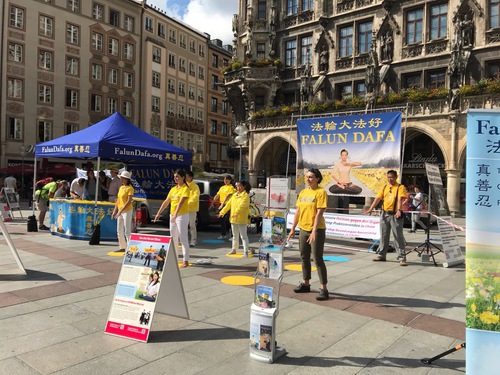 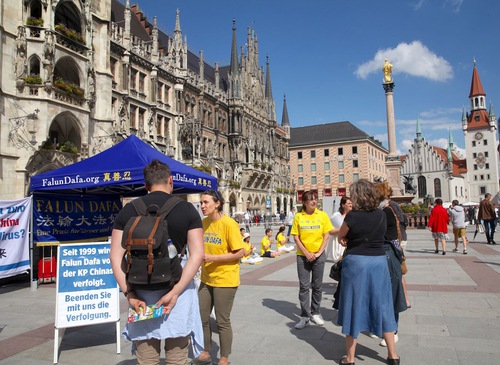 Several people talked with practitioners and wanted to learn more about Falun Gong.

After learning the details of the CCP’s brutal persecution, people signed a petition calling on the German government to help stop the persecution. Many expressed hope that the government speaks out and does not remain silent due to economic interests. 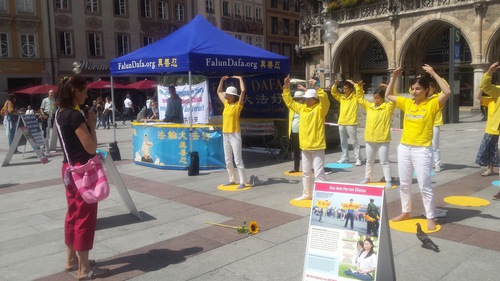 A young lady presents a flower to practitioners while they demonstrate the exercises.

A young lady read the posters and left, then returned with a flower and presented it to the practitioners while they demonstrated the exercises. She saluted them by pressing both hands in front of her chest and bowed her head. 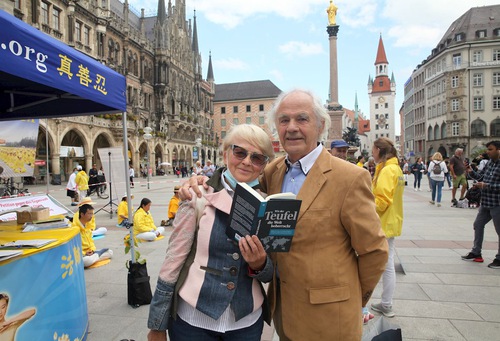 Senffte and her husband Dieter Senffte practice Tantrism. They said they felt the practitioners’ strong energy field. They signed the petition after learning about the CCP’s persecution.

“We are not involved in politics,” said Senffte, “But this human rights violation is our common concern. This cannot continue. They (the CCP) despise people so much, just like what is happening in Hong Kong now. We cannot allow such things to happen.”

“Communism is over. It is just a matter of time,” said Mr. Senffte. “China has a history of thousands of years. I know China well. I studied there. Family tradition has always been there. The Chinese people will survive. They can even survive communism.”

A lady told Falun Gong practitioners that she knew about Falun Gong, and wished to practice. She took the information and said she felt it was time to start practicing, and said she'd go to the local practice site and learn the exercises.

A German man who lived in India had an in-depth conversation with a Falun Gong practitioner. The practitioner told him what Falun Gong is and why the CCP persecutes it.

The man condemned the persecution and signed the petition to end it. He said he felt the practitioners' positive energy and that they were truly spiritual. He was stranded in Germany due to the spread of the CCP virus pandemic. He said he would go to the practice site to learn the exercises and about Falun Gong.