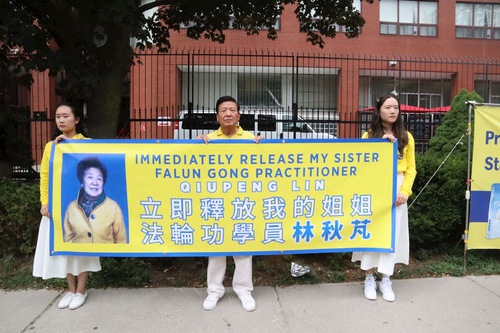 According to Mr. Lin, his sister, a seventy-four-year-old Falun Gong practitioner, was abducted by the Changning District police in Shanghai on May 29, 2020. Eight policemen broke into her home and forcibly took her away without a search or arrest warrant. They showed a surveillance camera shot of Mrs. Lin next to a breakfast house as evidence. Her family did not receive a document of detention until a week later. Even though her detention exceeded the maximum number of days allowed by law, the detention center would not release her, but continued to fabricate evidence to escalate the persecution. She was issued a formal arrest order on July 3. Her family hired a lawyer for her. However, no one in the detention center would answer the lawyer's inquiries.

Mr. Lin said that his sister used to have many health problems, including bloody urine and severe hair loss. After she practiced Falun Gong, her health issues were resolved. Her complexion became healthy and she grew new hair. By following Falun Gong’s principles of Truthfulness-Compassion-Forbearance, her temper improved and she became kind. Her family witnessed the power of Falun Gong through Qiupeng’s change.

Mrs. Lin tried to go to Beijing to appeal for Falun Gong in 2001, but she was intercepted and imprisoned for over a month. She was abducted again by the National Security Division of Minhang District of Shanghai on January 21, 2016, and detained for 15 days.

“No Chinese law has ever outlawed Falun Gong, but Jiang Zemin, the former head of the Communist Party, fabricated pretexts to persecute it,” Mr. Lin said. He stressed that it was legal for his sister to practice Falun Gong and distribute flyers, but detaining her was illegal. He warned the persecutors not to follow in Jiang’s footsteps.

“After Spending Ten Years Behind Bars, Retired Engineer Sentenced to Five More Years for His Faith”