(Minghui.org) Today's news from China includes incidents of persecution that took place in 10 cities or counties in 7 provinces, where at least 21 practitioners were recently persecuted for their belief. 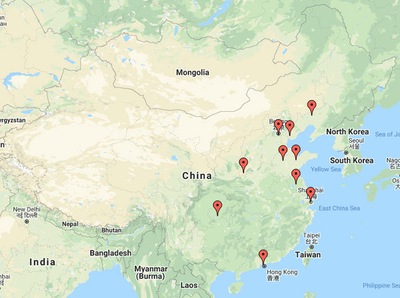 Ms. Zhang Yuhong of Fuxin City, in her 50s, was abused in Liaoning Women's Prison and suffered from bleeding in the brain. She has been in a coma for several days in the ICU in Shenyang 793 Hospital. At first, the prison refused to pay the medical bill, stationed many guards at the hospital, and shifted all responsibility to Ms. Zhang's family. It was learned on June 26, that Ms. Zhang had two operations, and was still in a coma. The prison blocked the communication between Ms. Zhang's family and the doctors, delayed medical care, denied release on bail, and demanded the family pay the 100,000 yuan medical bill.

Ms. Zhang was sentenced to four years in prison and taken to Liaoning Province Women's Prison on September 24, 2019. She suffers from bleeding of the brain as a result of persecution.

Ms. Jia was arrested and taken to the Pinggu Detention Center by officers from the Donggao Village Police Station on November 9, 2019, for distributing “Falun Dafa in the World” calendars. Her case was submitted to the Pinggu Procuratorate on February 5, 2020.

Ms. Xue Aimei has been missing for many days. It is believed that she was arrested.

Ms. Zhang Suying of Huaian City, in her 60s, was arrested around June 19, 2020. She is under criminal detention.

Ms. You Jia of Shanghai was arrested at home by officers from the Zhoujiadu Police Station on May 29, 2020. She was detained for a month.

Ms. Li Huiqiong's home was ransacked on May 22, 2020. Her Falun Gong books were confiscated.

Ms. Hang Xiurong of Tangshan City was arrested and taken away in handcuffs by officers from the Yinchengpu Police Station. She was released the next day.

Mr. Yang Chenghui, his wife Ms. Zhang Yuejun, and their son and daughter were arrested by criminal brigade officers. The door to their home was covered with police tape. Their daughter was released the same day. Mr. Yang and their son are being held in the Fengrun Detention Center, while Ms. Zhang is being held in the Tangshan First Detention Center.

Ms. Xiao Huijun and her husband were arrested by officers from Yongji Street Police Station. The husband (non-practitioner) was released the same day. Ms. Xiao is being held in the Tangshan First Detention Center.

Mr. Guo Zihong, husband of Ms. Wang Xianling, was arrested by officers from Tuanjie Road Police Station. He was released.

Ms. Zhang Bianying and her husband Mr. Wu Baoming were arrested on May 17, 2020. Their home was ransacked. Ms. Zhang is being held in the Gujiao City Fourth Detention Center. She will be tried in court. Mr. Wu was released on June 24, 2020.

An officer from the Chaoyang Police Station called Ms. Chen Shujun’s husband on the afternoon of June 19, 2020. The officer told Ms. Chen to come to the police station to get her confiscated cell phone. Ms. Chen refused to go. Her husband hit and kicked her, dragged her into a car, and drove her to the police station. The officers forced her to sign and press her fingerprints on Administrative Punishment Notification and a confiscation item list. She was photoed and videoed against her will. After that, the officers and community agents coerced her to give up her practice. She was finally released at 10 p.m.

Mr. Chang Xinqin and his wife Ms. He Wenxia were arrested by officers from the Ruzhou City Domestic Security Division on the morning of June 24, 2020. Their whereabouts are unknown.

After Spending 13 Years in Prison for His Faith, Liaoning Man Imprisoned for Four More Years

By a Minghui correspondent in Liaoning Province, China

(Minghui.org) A Qingyuan County, Liaoning Province resident was sent to Gongzhuling Prison in the neighboring Jilin Province in April 2020 to serve a four-year term for his faith in Falun Gong, after his appeal was rejected by the Tonghua City Intermediate Court.

Prior to his latest term, Mr. Zhang Jinsheng has spent 13 years in prison for upholding his faith.

Mr. Zhang was arrested in Beijing on May 29, 2019, while preparing to take a trip abroad. He was detained at Meihekou City Detention Center in Jilin Province after his arrest.

Mr. Zhang appeared in Meihekou City Court on September 26, 2019. His family was informed of his prison sentence in early 2020. It is unclear why Jilin Province was involved in the prosecution of the Liaoning Province resident.

Once Imprisoned for 13 Years, Liaoning Man Faces Further Prosecution for His Faith