The event was held on Raatihuoneenkatu, city hall street. The practitioners demonstrated Falun Gong exercises, and exposed the Chinese Communist Party’s (CCP) persecution of the past 21 years.

It was their first time to hold such an event in this city. Many people signed the petition calling for an end to the persecution. 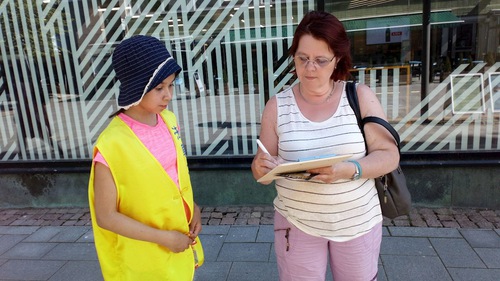 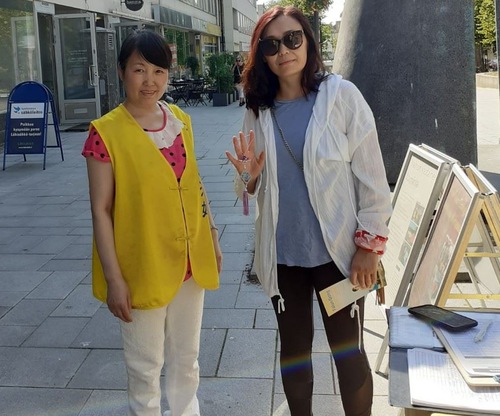 Passersby support the practitioners to end the persecution.

Passersby Learn the Truth of the CCP Persecution

The event venue was near Tampereensähkölaitos, an electric power company. Two staffers of the company were promoting their business outside. A practitioner talked with them about Falun Gong. They were appalled to hear about the CCP’s state-sanctioned organ harvesting from living practitioners.

The practitioner gave them paper-folded lotus flowers with a bookmark that read, “Truthfulness-Compassion-Forbearance.” They were amazed to learn about the universal values.

Mari, a local retiree, paused to sign the petition. She said she often read news from Amnesty International and learned about the CCP’s persecution. A practitioner told her about the perseverance of Falun Gong practitioners in their peaceful protest.

“She was imprisoned in China for her belief,” the practitioner said when pointing at another practitioner doing the sitting meditation. Mari said to her, “You are involved in a great cause. Great!” She left and returned half an hour later with two bottles of mineral water.

Janne operates a physical therapy company. He passed by at lunchtime and saw the practitioners doing the exercise demonstration.

“I know Falun Gong,” Janne said, “Don't you have the five exercises?” He said he learned the exercises during a health expo in Helsinki a few years ago. He was interested in traditional Chinese culture.

The practitioner explained to Janne that the CCP intentionally damages traditional culture and persecutes people of all beliefs. She introduced Falun Gong and talked about the CCP’s brutal persecution. Janne thanked her and said that he would learn Falun Gong again.

“I know the Communist Party,” said Jane, an undergraduate student in his 30s. “Communism is totalitarian and suppresses human rights. It is evil and never changes.” He signed the petition and commended the practitioners’ effort.