(Minghui.org) Today's news from China includes incidents of persecution that took place in eight cities or counties in six provinces, where at least 26 practitioners were recently persecuted for their belief. 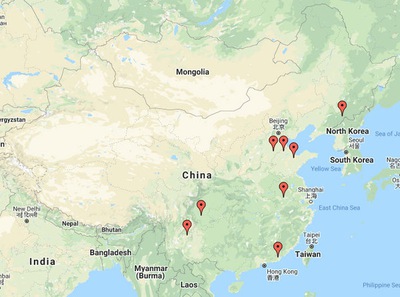 Ms. Wang Zhiqiong and Mr. Lai Dehua were arrested on September 9, 2019. They are being held in the Zigong Detention Center.

Officers from the High-tech Zone Police Station ransacked her home, and confiscated a computer (used for her child’s online courses), printer, and Falun Dafa books.

Ms. Yao was taken to the police station, where she was threatened, interrogated, photographed, had her voice recorded and blood samples taken. She was then released.

Officers from the Chengnan Police Station broke into Ms. Tan Fang’s home and ransacked it on the morning of June 12, 2020. They confiscated Falun Dafa books and audio players. Ms. Tan was arrested.

The police called her husband that afternoon, and told him that she was being detained.

Ms. Gao Xiuyun's daughter was arrested on August 29, 2019, and her home was ransacked.

Ms. Zang Shuling’s home was ransacked by officers from the Ningjin County Police Department and the Laoling City Police Department on June 2, 2020. A printer and two certificates of cash deposits each worth 20,000 yuan were confiscated. Her bank card has been frozen.

Mr. Yongtian and his wife from Dongwu Village, Xuzhuang Township in the Jizhou District were arrested on June 8, 2020. Their home was ransacked. They were released that afternoon.

Sixteen practitioners were arrested by over 100 officers from the Jieyang City Police Department and the Rongdong Police Station on June 14, 2020. A materials production center was destroyed by the police.

Ms. Zhou Shuhua was arrested on June 16, 2020, for talking to people about Falun Gong.

“How Many Attachments Have We Been Harboring?”