(Minghui.org) Today's news from China includes incidents of persecution that took place in five cities or counties in four provinces, where at least nine practitioners were recently persecuted for their belief. 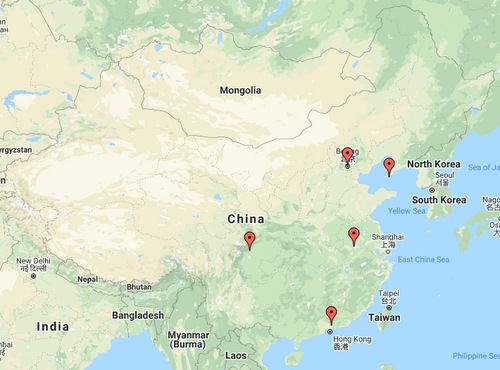 Ms. Yan Ping, an elementary school teacher in Boluo County, was arrested by officers from the Domestic Security Division on the morning of March 13, 2020. Her home was ransacked, and printers, computers, and other personal belongings were confiscated. She was taken to the Dayawan Detention Center and later transferred to the Boluo Detention Center.

Ms. Zhao Huicheng and Ms. Yang Dingqiong were arrested in the Yuquan Town Open Market on the morning of May 27, 2020. They were taken to the Yuquan Police Station, where they were searched, photographed, and videoed. Over 300 yuan with messages about Falun Gong written on the bills were confiscated.

Ms. Zhao and Ms. Yang were released later that day.

4. [Beijing] Persecution Against Mr. Jiang Jingyong and His Family

Mr. Jiang Jingyong and his daughter from the Ganjiakou Sub-district in the Haidian District disappeared on May 26, 2020. His home was ransacked, and his wife was arrested that afternoon.

Ms. Kang Qihui from Feidong County was arrested on April 24, 2020, for talking to people about the persecution of Falun Gong. Her home and her two daughters' homes were ransacked. She was formally placed under arrest and is being held in the Hefei City Women’s Prison.

“My Ruptured Tendons Healed on Their Own”