(Minghui.org) Falun Dafa practitioners in Croatia held a peaceful protest outside the Chinese Consulate in Zagreb, the country’s capital, on June 10, 2020.

They called on the Chinese Communist Party (CCP) to stop persecuting practitioners and to bring Jiang Zemin, the former CCP leader responsible for the suppression, to justice.

It was on this day in 1999 that the 610 Office, a Gestapo-like office with the power to override the police and judicial systems, was set up to carry out the regime’s persecution policies. 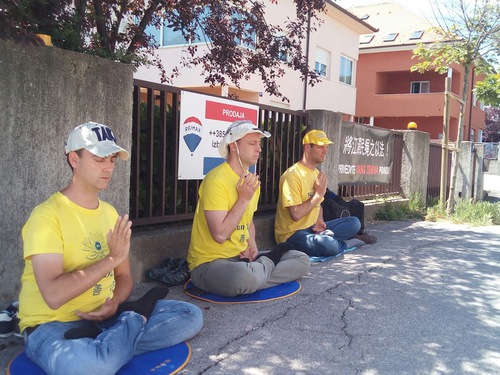 Practitioners arrived at the Chinese Consulate, located on Mlinovi Street, just before 2 p.m. They put up a banner on the sidewalk facing the building and began to do the exercises. Several practitioners handed out information to passersby and police officers on duty.

There weren’t many pedestrians around the Consulate, but there were a lot of cars. It is a slow speed zone, so all cars have to reduce their speed in front of the office. This gave the drivers and their passengers a chance to read the banner that said: “Stop Persecuting Falun Gong, Bring Jiang Zemin to Justice.”

Several cars honked their horns to show their support. One driver even shouted. “May God bless you!”

Ivan, a practitioner, talked to the police officer on duty basic information about Falun Dafa, a mind and body practice, and about the CCP’s persecution. The officer suggested that, next time, practitioners hold their activities in another area of the city center where there is no need to apply for a permit and no time restrictions. A few of the officers also accepted Falun Dafa informational materials.