Melbourne: "I Will Help Stop the Forced Organ Harvesting"

(Minghui.org) When the Australian government relaxed restrictions on social activities during the pandemic at the end of May, Falun Dafa practitioners in Melbourne returned to various sites, including the downtown commercial area, to raise awareness of the persecution of Falun Dafa practitioners in China. They handed out informational brochures and encouraged people to sign a petition calling for an end to the persecution.

One man praised practitioners' grit and strong will to persevere in resisting the persecution for these past 20 years. He said it was truly admirable. A young man had tears in his eyes while he listened to how practitioners are persecuted in China. Another man said that if everybody followed Falun Dafa's principles of Truthfulness, Compassion, and Forbearance, the world would not be so chaotic. Several others said that people should take to the streets to protest the Chinese Communist Party's (CCP) killing of prisoners of conscience for their organs. 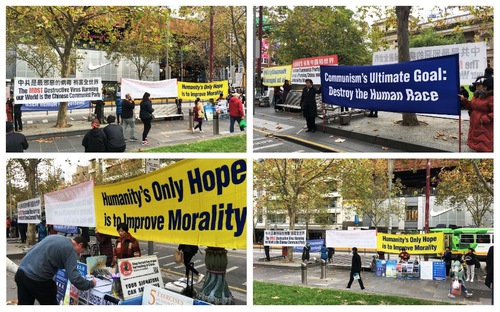 Practitioners raise awareness about the persecution in China near the State Library in Melbourne's downtown area. 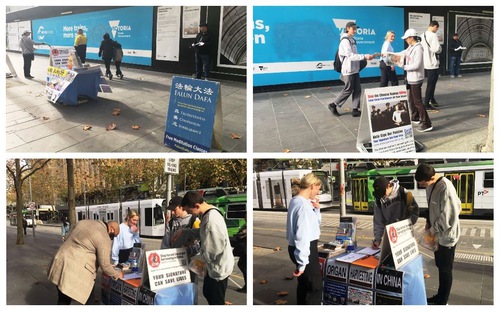 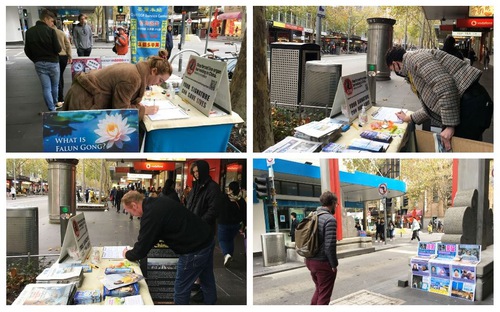 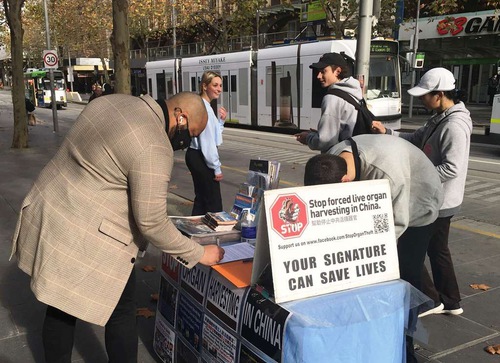 Zana signs the petition to stop the persecution of Falun Gong in China at City Square in Melbourne on June 6, 2020.

A singer named Zana stopped at the practitioners' table as he was passing by City Square. He signed the petition to support practitioners' efforts to stop the persecution.

“Such unjust and inhuman things cannot be tolerated. What the CCP regime does to Chinese people cannot be accepted. It should be stopped,” he said.

“If the CCP caused the epidemic to spiral out of control, it should take full responsibility for the outbreak of the pandemic. I know that Chinese people have to use software to circumvent the great firewall in order to get uncensored information, and if they speak out via the Internet, they could be arrested by the regime,” he said.

He commended practitioners for their perseverance in raising awareness about what has been happening in China. He said, “If everybody follows the principles of Truthfulness, Compassion, and Forbearance in everyday life, then many unjust things in this world would not have happened.” 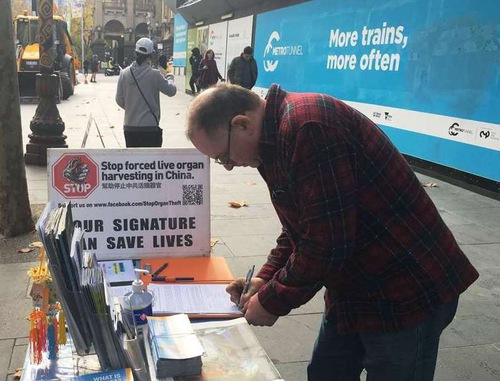 Robert signs to condemn the persecution of Falun Dafa practitioners in China.

Robert, who is Christian, signed the petition and said, “Now the whole world is in chaos. Our society is flooded with selfishness and greed from top to bottom. In China, we see the corruption of society. People with wealth and power are not concerned with average people's hardships at all. They persecute innocent people. The CCP covers up the facts about everything and people have no right to express their opinions against the government.

“That's why the universal principles of Truthfulness, Compassion, and Forbearance are so important. We learn the facts from Falun Dafa practitioners who believe in these principles. These principles will play a very important role in the future because they can help people to keep their kindness and hope. Because only kind people can possibly return to heaven and ultimately be looked after by God.”

People Should Protest on the Streets to Stop Such Atrocities 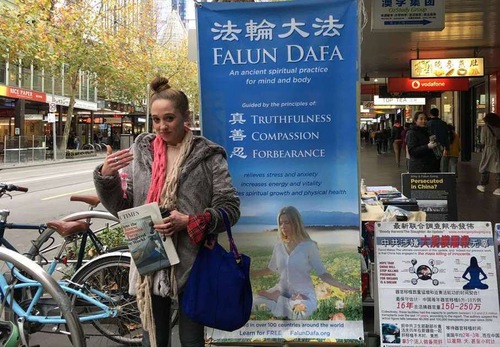 Jemina at Melbourne's Chinatown, where practitioners raise awareness of the persecution in China.

Jemina had a long conversation with a practitioner in Chinatown. She believes that killing people for their organs to make money is terrifying. She thought that people in all counties should take to the streets to protest the CCP's heartless crimes against humanity and stop such atrocities as soon as possible.

“I truly hope there is a way to stop organ harvesting and rescue innocent people as soon as possible,” she said. 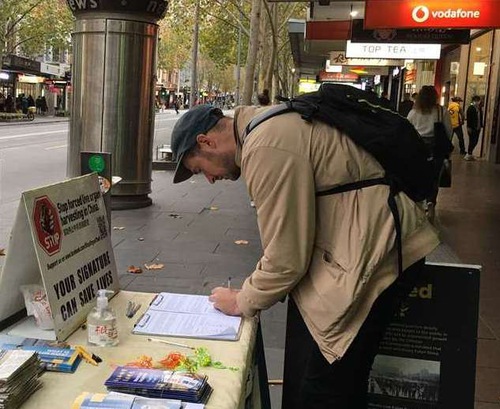 A Melbourne businessman signs the petition against the persecution in Melbourne's Chinatown, June 6, 2020.

A Melbourne businessman signed the practitioners' petition and said, “All people should sign to oppose such atrocities.”

“I first learned about Falun Dafa a few years ago,” he continued, “ after I watched several excellent documentaries about killing people for their organs. They had a lot of strong evidence to prove it. That shows that this evil is real and is happening. It's an industry with enormous profit. It's puzzling that the Australian government hasn't taken any clear action about this. The Australian government should prohibit people from going overseas for illegal organ transplantation, just like Israel does.

“We should pressure the Australian government to pass a bill to prohibit Australians from accepting organs from unidentified sources. I'd like to learn more and try to get Members of Parliament to take action to stop this organ harvesting,” he added.

Before he left, he said, “Falun Dafa practitioners are a group of strong people. They never give up their belief even though they face such cruel persecution. The words 'Truthfulness, Compassion, and Forbearance' are extraordinary and full of wisdom. I'd like to learn about it in more depth.”