(Minghui.org) Today's news from China includes incidents of persecution that took place in seven cities or counties in four provinces, where at least ten practitioners were recently persecuted for their belief. 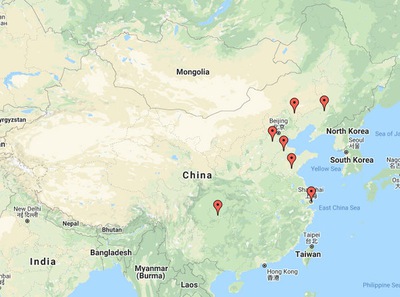 Mr. Wang Jinzhang, senior accounting vice-president of the Shanghai Xinhua Distribution Group, was arrested at work by the deputy director of Huangpu Domestic Security Division and other officers on the afternoon of May 31, 2020.

His office was searched and his cell phone, notebook computer, and Falun Gong fliers found in his safe were confiscated. He was taken to the Nanjingdonglu Police Station. The police ransacked his home that afternoon, and confiscated his printer.

Mr. Wang is being held in the Huangpu District Detention Center.

Mr. Ren Dongchuan’s home was ransacked by officers from the Xipeng Police Station and personnel from the town government and residential community committee on the morning of June 3, 2020. His computers and other personal belongings were confiscated.

Ms. Yu Fengying was arrested by officers from the Hongshan District Police Department on May 2, 2020.

Ms. Yue Shujuan, Ms. Xu Jingbo, Ms. Pan Caiqin, and Ms. Tian Yongxia were arrested on May 12, 2020, after someone reported them for talking to people about the persecution of Falun Gong. Zhang Fenglai and other officers from the domestic security division ransacked their homes, and confiscated Falun Gong books, computers, and other personal belongings.

Ms. Yu, Ms. Xu, and Ms. Tian were released later that night. Ms. Xu was taken to the Diaobingshan Detention Center and is not allowed family visits.

Ms. Zang Shuling’s home was ransacked by officers from Ningjin County and Laoling City on June 2, 2020. The family was not home at the time. The village Party secretary led the officers to jump over the fence and break into the house. They confiscated more than 10,000 yuan, bank cards, and seized their car.

Mr. Tian Dejun was arrested at home by Anti Town 610 Office agents and officers from the town's police station on May 28, 2020. They confiscated his Falun Gong books and other personal belongings. He was held in the police station for two days.

“Clarifying the Truth at a Grocery Store During the Pandemic”