(Minghui.org) Today's news from China includes incidents of persecution that took place in nine cities or counties in six provinces, where at least 11 practitioners were recently persecuted for their belief. 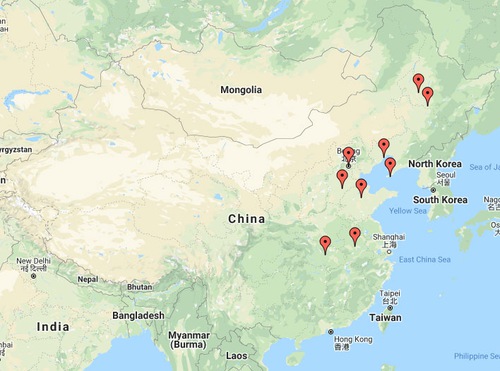 Ms. Han Ling, in her 70s, from Wuqiang County was placed in criminal detention for distributing Falun Gong informational booklets. She was sentenced to a two-year prison term by the Anping Court on December 26, 2019.

She appealed on January 6, 2020. Her lawyer was notified on June 3 that the original verdict had been upheld by the Hengshui City Intermediate Court.

Ms. Kang Zihui from Feidong County was reported to the police on April 23, 2020, for talking to people about Falun Gong. She was arrested.

Ms. Shao Shuhua and Ms. Chen Fengyun from the Dalianwan area were reported to the police on the morning of May 31, 2020, for distributing Falun Gong informational materials. They were arrested by officers from the Bianfang Police Station. An audio player and 120 yuan in paper currency bills with Falun Gong information printed on them that were in Ms. Shao’s bag, were confiscated.

The police ransacked their homes and confiscated Falun Dafa books. Both practitioners were released later that evening.

Mr. Zhai Mouchen from Mazhuang Village, Nanding Town in the Zhangdian District was arrested on June 3, 2020.

Mr. Cheng Weixing from Xingcheng City was arrested by officers from the Wenquan Police Station on May 12, 2020. He is being held in the Huludao City Detention Center.

Ms. Hu Guilan, in her 70s, from Wenquan Village, Sujiatuo Town, was intercepted by the police on the afternoon of May 2, 2020. They found Falun Gong informational booklets in her bicycle basket. She was taken to the police station for interrogation. Her son took her home that evening.

Sun Hongbin and six officers from the Jincheng Township Police Station pried open the windows of Ms. Yu Lidong and her mother-in-law Ms. Xu Dianzhi’s home on June 2, 2020. They broke in and confiscated their Falun Dafa books and photos of the founder of Falun Gong.

Mr. Xiong Jiwei was sentenced to a four-and-a-half-year prison term on September 28, 2018. He appealed to the Xiaogan City Intermediate Court, but the original verdict was upheld.

He asked his lawyer to file a complaint with the Xiaogan Intermediate Court on April 10, 2019. It was dismissed by the court on October 30, 2019.

Mr. Xiong's family members followed the legal procedure to re-appeal and submitted documents to the Hubei Province High Court on January 6, 2020. The court notified them that it would decide within a month whether to accept the case.