(Minghui.org) Osnat Gad, 73, lives in Suffolk County on Long Island in New York. She is Jewish and immigrated to the United States in the 1960s. She manages her family’s jewelry business and travels around the world every year searching for rare stones. 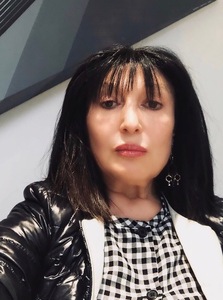 Ms. Gad's brother and his family, who live in Manhattan, came to spend the weekend with her on March 12, 2020. A week after they left, she began to feel ill. She could not taste anything, except for a metallic taste.

“I only wanted to eat either sweet or sour food. I wanted to lie in bed because my whole body ached when I got up,” she said.

She drove herself to a hospital in Southampton on March 21, 2020. The doctor told her that she had the symptoms of a lung infection and asked her to self-quarantine at home. The doctor also instructed her to take Tylenol every four hours to relieve her fever.

Ms. Gad returned home and her condition deteriorated. She had difficulty breathing and she was in such pain that she could not get out of bed. She was scared she was going to die.

“I completely lost my memory for one month: March 21 to April 21. My mind was blank. I was washing my bedsheets frequently because I often broke out in a sweat. My nose was not blocked and I could not breathe. I could not even speak as my voice was getting weaker,” she said.

“The fear of not being able to breathe was tremendous as I was alone. I thought if I could not catch my breath the next moment, I could not call anyone to send me to the hospital because I do not want to spread the virus to them. The thought of transmitting the disease to my loved ones was terrifying. This illness cuts one off from the world. It makes people feel lonely.”

Ms. Gad’s friend Anna Louis, who is a Falun Dafa practitioner, contacted her on April 23 and suggested she recite the phrases “Falun Dafa is good, Truthfulness-Compassion-Forbearance is good.”

Ms. Gad that same night texted her friend back saying she could feel air slowly going into her lungs after reciting the words. She could breathe again. She sent another message to Anna telling her that she felt oxygen in her heart, too. The next morning, she told Anna that she fell asleep after reciting the words the previous night and slept soundly. She felt better. She told Anna she wants to learn Falun Dafa.

“When Anna suggested I recite the phrases, I said okay because I had no choice. I did not know what else I could do. The doctors told me not to go to the hospital. If I went there, I would need to be put on a ventilator,” she said.

Ms. Gad observed that as she read the phrase word by word, she felt her lungs open up and fresh air go in. “I was able to breathe deeper and longer. Whoever invented this phrase, it truly is a way for teaching one to breathe correctly,” she said.

Not only did her coronavirus symptoms disappear after reciting the words, but she also found that some of her previous ailments such as heart problems were gone too.

She recites these words daily now. “I did not believe in miracles before. But reciting this has changed my energy level,” she said.

Ms. Gad is now full of energy and walks two miles every day. She has returned to work.

“I am grateful to Falun Dafa for saving my life. I thank Anna for teaching me this. God has brought her and Falun Dafa to me,” Ms. Gad said.

“Saving People During the Lockdown”