Abandon Communism to Embrace a Bright Future for Humankind

(Minghui.org) The entire city of Berlin fell silent at noon on August 13, 2011. Traffic came to a standstill and pedestrians halted in their steps, with only a church bell echoing in the air.

Berlin was commemorating the 50th anniversary of the construction of the notorious Berlin Wall and observing one minute of silence for the victims who lost their lives trying to climb over the wall to freedom.

Prior to the construction of the wall, a code name, “China's Great Wall II,” was endorsed for the project, indicating that the wall would be as indestructible as the ancient Great Wall of China.

But 28 years later, the Berlin Wall, portrayed by the Western world as a symbol of communist tyranny, fell in 1989, largely due to chain reactions to a succession of revolutions in Eastern Bloc countries, in particular, Hungary and Poland.

Not long after the fall of the Berlin Wall, the restless Chinese Communist Party (CCP) began to quietly build another “Berlin Wall” in China – the invisible “Great Firewall” for the purpose of regulating and censoring the internet usage of the Chinese people and blocking access to certain foreign websites and internet tools and mobile apps.

For decades, countless cyber police have been put to work every day to brainwash the Chinese netizens by spreading false information and covering up the CCP’s lies. The invisible “Great Firewall” has effectively prevented the Chinese from accessing the truth to this day.

It has been a long and arduous journey for former Eastern Bloc countries to clear out the communist presence after the disintegration of the Soviet Union. People were disturbed to still see so many reminders of communism in their daily lives, such as street names, statues, buildings, and badges.

Lenin was once hailed as the “great leader” and promoter of global communism, and statues of him were enthusiastically exported to different countries under the auspices of the Soviet Union. As many as 7,428 statues of Lenin were erected around the world.

As more and more files were declassified, shocking facts of how Lenin slaughtered the Russian people came to light.

The rush to pull down Lenin's statues came as a natural reaction by people who used to live in darkness and mistakenly regarded him as the “founding father” of their nations. It is estimated that over 6,000 statues of Lenin were taken down. At the same time, monuments and museums were set up to remind people of the disasters caused by communism. 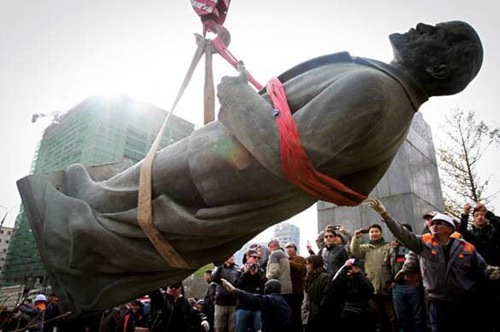 Lenin's statue in Mongolia's capital city Ulaanbaatar being taken down 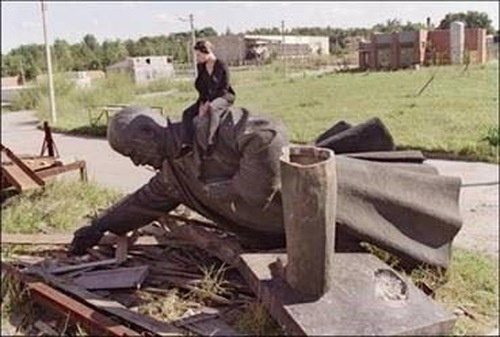 A Lithuanian sitting on the overturned Lenin statue

Victor Bugaichuk, the governor of Poltava, Ukraine, gave orders that all monuments and statues of Lenin in the nation be removed by November 24, 2014.

Bugaichuk considered the continued preservation of the statues of their communist oppressors a blasphemy against the Ukrainian people and required the entire state to “clear out all symbols of the former Soviet Communist totalitarian dictatorship from streets, squares, schools, and other public places throughout the state.” There were thousands of monuments to communism and statues of Lenin in Ukraine when it was part of the Soviet Union. 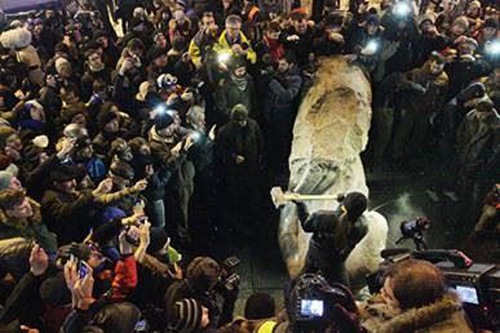 A Lenin statue being smashed in Kiev, Ukraine

Interestingly, according to a chart published by sociologists on Ukraine media, places with more Lenin statues had higher crime rates and more economic problems, whereas in the central and western regions where there were very few or no such statues, the economy grew more quickly and there was less social unrest.

On April 9, 2015, the Ukrainian parliament passed legislation to ban the promotion of symbols of communist and national socialist totalitarian regimes in the Soviet era, including the former national flag, emblem, and anthem; the hammer and sickle; the pentagram; and so on. The legislation also banned Communist Party-flavored signs as well as Communist Party leader citations. Communist-themed street and city names were to be removed and altered.

From Lenin to Stalin, the communist dictators were responsible for incalculable suffering in the Soviet Union. “More than 60 million Russians lost their lives due to wars, starvation and repression in the Soviet era,” wrote A.N. Yakovlev, a member of the Politburo and Secretariat of the Communist Party of the Soviet Union and a historian in his book Bitter Cup, published in 1994.

The “Wall of Grief” (also known as “Wall of Sorrow”), a national memorial to the victims of Stalin’s political persecution, was unveiled in Moscow on October 30, 2017, publically announcing to the entire world that the criminal history of the Soviet Communist Party's indiscriminate killing of innocent people is utterly condemned, and the “October Revolution” and Communist ideologies are completely despised and rejected.

Secret Archives Laid Bare for All to See

People in East Germany were subjected to extremely tight surveillance under the Communist regime with, on average, one in every 6.5 East Germans an informer.

When the Berlin Wall crumbled on November 9, 1989, the secret police (Stasi) in East Germany panicked and tried to destroy secret documents as fast as they could. However, local residents, realizing what was happening in those big grey buildings, rushed in and successfully seized the “complete records” of decades of autocratic dictatorship.

End-to-end, the written archives would stretch 180 kilometers (112 miles), plus 39 million card indexes, tens of thousands of pictures and audio files, as well as 15,600 sacks of hand-ripped files, which were later painstakingly restored.

The archives are open to the public, and every individual, organization, or institution has the right to view them. So far, a total of 1.7 million people, roughly 10% of the East German population, have applied to view their archives. Marianne Birthler (a former East German civil rights activist who became director of the BStU, the agency responsible for the safekeeping of, and access to, the Stasi files) said: “So many people decided to break the silence, [because] they hope to know the truth, they want to know what had happened to them in the past.”

After the reunification of the two German states in July 1990, the massive headquarters of the East German Ministry of National Security (Stasi) was turned into memorials and museums to remind people of the pain and suffering of the people at the hands of the Stasi under the communist regime in East Germany. Personal accounts, exhibitions, and publications bear witness. 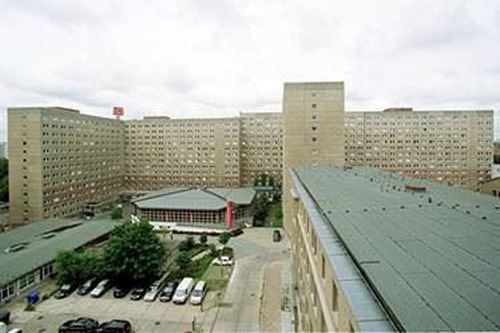 Massive headquarters of the former Stasi of East Germany

In January 1990, the Communist Party in Poland, with a membership of 3 million, was dissolved after ruling Poland for 42 years. The Polish people abandoned the communist system and undertook a series of “decommunization” procedures to dismantle the legacies of communist ideology, organization, culture, and psychology.

Eight years later, in December 1998, the Polish Parliament passed legislation to establish the “Institute of National Remembrance” to investigate and prosecute crimes against the Polish Nation and its people from November 1917 to the end of July 1990, including World War II and the communist period.

By 2015, the institute had collected 90 kilometers (56 miles) worth of archives, published 1,794 books and articles, organized 453 exhibitions, held 817 meetings, and set up 30 educational websites. At the same time, its investigators interviewed 103,000 witnesses, questioned 508 people accused of crimes, and contributed to 137 judicial prosecutions.

In May 2016, Poland's President signed a law on decommunization to prohibit the propagation of communism and other totalitarian regimes and to remove and alter the names of buildings, streets, and objects with communist themes.

The law was amended on June 22, 2017, ordering that all statues and monuments in public places that symbolized and praised communism and totalitarian regimes be demolished by the following year.

In a statement, the Polish Parliament affirmed that its decommunization law sends out a clear message that Poland prohibits and opposes any totalitarian regimes and condemns the spread of such ideologies. It also stated that preserving sculptures of and/or monuments to those who committed serious crimes would provide supporters of totalitarian regimes with the opportunity to spread wrong ideas and negatively impact society.

It has taken over 20 years for the former communist states in Eastern Europe to clear out their communist legacies and remove symbols of communism from public places. Through that process, people have reflected upon what they had been through under the communist regime, gained a clearer understanding of the evilness of communism, and put in place effective measures to prevent it from harming them again.

China under the CCP

Today, China is still in the grip of the CCP, where portraits of Mao and Party flags are ubiquitous and government-controlled media outlets and the internet sing the praises of the “red regime” nonstop.

Public commemorative activities are prohibited in China, even in memory of disasters admitted by the CCP itself, such as the “Cultural Revolution,” let alone other devastating catastrophes, political purges, and killings the CCP has tried to cover up. Any such commemorative activities would be labeled as “subverting the regime,” and key persons involved would be closely monitored by the police.

At 7:00 p.m. every evening, the CCTV starts its daily news program “Xinwen lianbo” to glorify the CCP and brainwash hundreds of millions of people, turning them into “robots” that the CCP can deceive and manipulate at will.

Independent and critical thinking are repressed, and traditional culture and moral values are destroyed. As a result, there has been a rapid decline in morality in today's China under the communist regime.

The CCP forbids people to believe in anything other than atheistic communist doctrines and stops at no evil in its persecution of people of righteous faith, such as Tibetans, Uyghurs, members of Christian house churches, and, most brutal of all, the persecution of Falun Gong practitioners who live by Truthfulness, Compassion, and Forbearance.

The CCP is responsible for countless disasters in China since it came to power in 1949, and tens of millions of people have lost their lives as a result.

Still, the CCP has never admitted any wrongdoing. It tries to cover up its crimes by depriving people of their freedoms of publication and of speech and by feeding them disinformation and lies in textbooks and through its mouthpieces.

After a disaster, the CCP might say “we need to learn a lesson,” but it never does, never has, and never will truly reflect upon itself. So the Chinese have had to suffer one disaster after another, mostly due to of the CCP’s cover-ups, from the devastating Tangshan earthquake in 1975 to the horrific earthquake in Wenchuan in 2008, from SARS in 2003 to the current deadly coronavirus outbreak in Wuhan, which has now turned into a pandemic, infecting millions of people around the world and killing tens of thousands.

History cannot be erased and must not be forgotten. The CCP's unscrupulous conduct and its long-term ambition to ultimately dominate the entire world have prompted more and more people to realize that we must not hold any more illusions about the CCP; we must make a clean break with communism like the people in Eastern Europe have done and completely clear out the toxic influence of communism in the international community.

In the Nine Commentaries on the Communist Party published by the Epoch Times toward the end of 2014, it says: “We must abandon all illusions, thoroughly examine ourselves without being influenced by hatred, greed and desires. Only then can we rid ourselves of the nightmarish control by the possessing spirit of the CCP over the last 50 years. In the name of a free nation, can we re-establish the Chinese civilization based on respect for human nature and compassion for all.”

“Dafa Brought a Smile Back to My Face”