(Minghui.org) During the Canadian parliamentary debate of May 25, the persecution of Falun Gong practitioners in China, including the Chinese regime's forced organ harvesting of prisoners of conscience, was raised and discussed. David Sweet, Member of Parliament, Shadow Minister for International Rights and Religious Freedom, called to sanction China for its severe human rights violations. 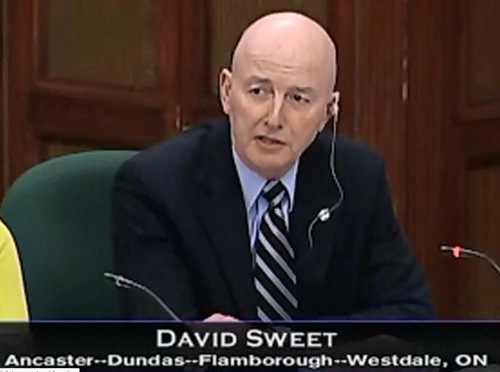 In his letter of May 13, 2020 to congratulate World Falun Day, MP Sweet wrote, “This is the 28th anniversary of Falun Dafa Day and this year is more significant than ever. That’s because in a world changed by COVID-19, we are more mindful of those in China who have been persecuted for decades by the Communist Regime for speaking out for transparency and freedom and against persecution.”

During his speech in Parliament on May 25, Sweet emphasized the suffering of Falun Gong practitioners in China at the hands of the Chinese Communist Party (CCP). He added that the meditation system is a peaceful, ancient spiritual practice.

“Those who practice Falun Gong in China face harsh persecution at the hands of the CCP and its police forces. If arbitrary arrests, forced labour and torture were not enough, we have had witness testimony at the Subcommittee on International Human Rights of organ harvesting,” he said.

“Our former distinguished colleague, the Hon. David Kilgour, as well as well-known human rights lawyer, David Matas, have given compelling evidence repeatedly on this practice by the CCP. Let us think about that: detaining Falun Gong, imprisoning them arbitrarily, torturing them to death and then harvesting their organs for sale,” he continued.

Besides Falun Gong practitioners, MP Sweet also talked about other religious and minority groups suppressed in China including Uyghurs, Tibetans, and Christians.

He also differentiated between the CCP and the Chinese people. “Chinese people are kind and gentle people with a deep respect for family, tradition, faith and caring for the elderly. These are among the many fine qualities of their character, but they are an oppressed people, oppressed by the Chinese People's Party's communist regime in Beijing,” he explained.

Canadians are aware of the suppression in China. “Today, it is probably the issue I hear most from my constituents. That is why the House voted in December to strike a Special Committee on Canada-China Relations on a motion from my colleague, the honorable member for Durham,” he added.

Sweet said that the CCP does not care about the Chinese people. He also mentioned a “heart-wrenching” story in which the disabled son of a father died of starvation while he was in quarantine over the coronavirus. “It is but one example of that heartless regime,” he said.

With the recent repression of the democratic movement in Hong Kong, Sweet proposed a motion to further assess the situation in Hong Kong and end the religious persecution in China.

“An Entire Family Persecuted for Their Faith: Father and Son Die Within Ten Days of Each Other”

“Be Mindful of Sharing Cultivation Experiences on Social Media”