(Minghui.org) Today's news from China includes incidents of persecution that took place in 11 cities or counties in eightprovinces, where at least 19 practitioners were recently persecuted for their belief. 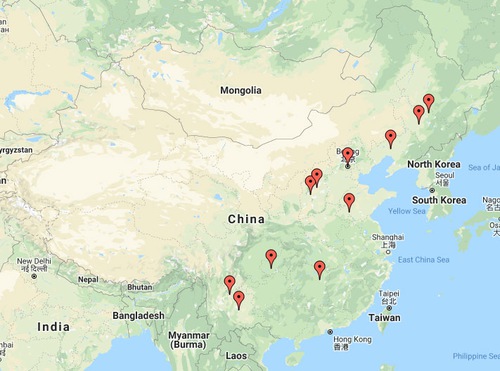 Mr. Qiu An, 46, was arrested at his store by officers from the Xiaobanqiao Police Station on the afternoon of May 11, 2020. His family went to the police station and asked to see him, but their request was denied.

Mr. Qiu was previously arrested by officers from the Xiaobanqiao Police Station on December 11, 2018, for talking to people about the persecution of Falun Gong. His home was ransacked.

Officers beat him in the police station, and sprayed pepper water into his eyes. His pelvis and ribs were fractured, and he had several bruises all over his body. Officials at the Kunming Detention Center refused to admit him because of his injuries.

Ms. Deng Yuli was reported to the authorities on April 22, 2020, for distributing Falun Gong fliers in Yangmu Village, Qingding Township. Several officers from the Xinli Township Police Station and the Yushu City Domestic Security Division broke into her home and arrested her on April 23. She was interrogated in the police station.

Ms. Deng was transferred to the Yushu Police Department the following day, and held there for five days.

Officers from the Yushu Domestic Security Division took her to the Changchun City Detention Center, but the authorities there refused to admit her. She was released after her daughter posted bail.

Ms. Yang Shijie was arrested at home by officers from the Houshayu Police Station on the morning of May 5, 2020. They confiscated her U-Drives and other personal belongings. She was taken to the Shunyi Detention Center.

Ms. Fu Yanfei was reported to the authorities by neighborhood agents on the morning of May 11, 2020, for talking to people about the persecution of Falun Gong in the Jiayuan Neighborhood, Changqing Residential District.

Ms. Liao Shulan, in her seventies, from the Changshou District was arrested by officers from the Duzhou Police Station in May 2012 for distributing Falun Gong fliers. She was sentenced to a three-year prison term, and incarcerated in late 2012.

Officers from the Huixingjiedao Police Station and Gaoyanlu Neighborhood personal forced their way into Ms. Yang Yingfen’s home and ransacked it without showing any identification or warrant. They confiscated Falun Gong books, printouts, more than 100 yuan in cash, and other personal belongings. Ms. Yang was not home at the time.

Ms. Jiang Baolian was detained on April 20, 2020. Officers from the Xiaoyi City Domestic Security Division and a police station ransacked her apartment, and confiscated her printers, Falun Gong books, printouts, and other personal belongings.

Ms. Cui Yajun, 78, and Ms. Hu Jie were arrested by officers from the Guangning Township Police Station on March 2, 2020, for posting Falun Gong fliers in the countryside. They were taken to the police station, and transferred to the Beizhen City Criminal Police Brigade for interrogation. Their homes were ransacked.

Ms. Cui and Ms. Hu were released later that night.

Staff from the Beizhen Court called Ms. Cui’s family and summoned her to the court on May 6. Ms. Cui left home to avoid further persecution.

Ms. Gao Caifeng was sentenced to a four-and-a-half-year prison term by the Yingze District Court.

Ms. Chen Chan was arrested on May 9, 2020, for distributing Falun Gong fliers. Her home was ransacked, and personal belonging confiscated.

The police took her 18-year-old son to the police station and handcuffed him to a chair and began beating him. His hands were bleeding and his head was injured. The officers forced her to watch her son being beaten and demanded to know where she got the fliers.

Deputy head of the Liangshan County Domestic Security Division Zhang Ming and twelve officers broke in and arrested them. They were released later that night.

The practitioners were called back to the police station for interrogation the next morning, and were held there until 8:00 p.m. Their homes were ransacked.

“Paying Attention to Doing the Exercises and Manifesting Dafa's Power”

“Remembering Not to Slack Off So Dafa Doesn't Pass You By”