(Minghui.org) It was a beautiful spring morning. As soon as I woke up, I picked up my phone and looked at my new messages. Some came from old friends whom I hadn’t heard from for quite a while.

The award winning film “Origin Bound,” by New Century Films, went online the day before. I'd shared the link with my friends the previous night. As I read their feedback, I was moved to tears.

One friend said, “I watched the film. I was really moved! I’m very happy for you. You have found such a great belief!”

Another said, “Congratulations! It’s a great film. Your performance is great! I didn’t know Falun Gong was so amazing. I will read the book you recommended. Thank you!”

Still another said, “I cried like a baby while I watched the film! It’s so touching! Thank you so much for sharing this film! I’m proud of you! You have found your belief. You look so happy!” 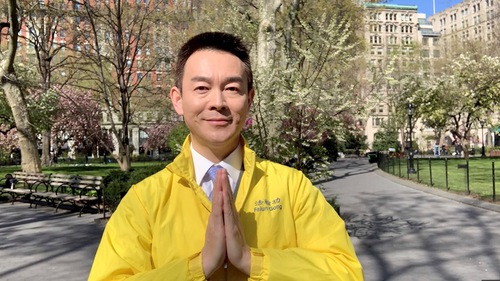 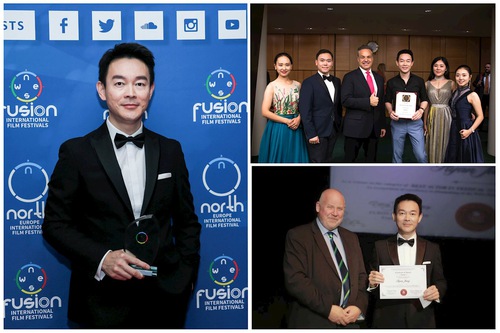 How It All Began

My thoughts drifted back to the spring of 1998.

In April 1998, the Chinese historical television series, “Yongzheng Dynasty,” was being filmed at the Dajue Temple [Temple of Enlightenment] in a Beijing suburb. I was one of the main actors. Surrounded by tall pine trees, the quiet temple seemed a perfect setting for a monastic practice.

The Temple of Enlightenment was where I first heard of Falun Dafa and was introduced to the book Zhuan Falun.

In “Origin Bound,” the main character, Howard Wang, kneels down in front of Master Li Hongzhi’s portrait. He tearfully thanks Master for giving him a second life. This is exactly what happened one evening during the winter of 1998. Kneeling down in front of Master Li’s portrait, I placed my palms together in a gesture of respect, and I vowed, “Master! I want to practice Falun Dafa!”

Whenever I face obstacles or have doubts, I remember that evening and I’m surrounded by a field of compassion that fills every cell of my body. My courage and strength are restored, and I know that the strength of compassion comes from Master Li.

Looking back over my 22-year cultivation path, I know that Master protected me at every step.

Here is my answer: The real power and driving force in a person’s life come from a strong spiritual belief. Only when one cultivates the righteous Fa can you obtain this power. Once you’ve found the Fa and have this power, you will treasure it. Would you give it up? You wouldn’t.

I’m saddened by the brutal persecution which is covered up by monstrous lies. But the people who are truly harmed are not Falun Dafa practitioners but those who’ve been blinded and mislead by those lies.

I’m proud to be one of these amazing people who guards and upholds Truthfulness-Compassion-Forbearance.

I’ve had several unforgettable experiences. In August 1999, after the persecution began, I was selected for the number two male lead in a big TV production for China Central Television. All actors were required to sign a guarantee letter stating they would not practice Falun Gong. I refused to sign it.

I lost the opportunity. But when I walked out, my head high, I had no regret. I was proud. I was happy. I knew that Truthfulness-Compassion-Forbearance was firmly rooted in my heart, even though I'd only practiced Falun Dafa for less than nine months.

While I was waiting for the bus, my phone rang. It was from another production company. I was invited to meet with the director for a possible role. On my way there I wondered if they were going to ask me to stop practicing Falun Gong.

The director asked if I'd accepted any acting roles lately. I said, “I just rejected a number two male lead.”

“Because I practice Falun Gong.”

The director looked at me for a long time without saying anything. Finally, he smiled, “You are terrific! I like your courage and sincerity. This role is for you!”

I immediately signed the contract, and left with a smile on my face. I realized I'd enlightened to and experienced what Master taught. Master told us that for a practitioner, what’s yours is yours. We won’t lose anything because we practice Falun Gong.

The second incident took place in April 2000. I was arrested for appealing for Falun Gong. After 24 hours in a detention center, I was released.

Walking through central Beijing, I suddenly felt lonely. In such a huge country, there was no place for me to freely practice my spiritual belief. What should I do? I felt sad and hopeless.

Throughout the following days my spirits were low. I went with my friends from the entertainment circle to bars and disco clubs. I had stopped going to these places after I started to practice Falun Gong. Now these places attracted me again.

I struggled in my heart but gave up in the end. I carefully shelved the book Zhuan Falun. I felt I had sacrificed a lot. I decided to enjoy myself.

Yet, I was not happy. In fact, it was painful. One of the reasons I was interested in cultivation in the first place came from my fear of death. I used to ask myself: even if I am successful and rich, how can I escape the final fate – death? It made me think about why we are here.

Falun Dafa was like a bright light on my dark path. From the depths of my heart, I know it points out a path of hope. The path might be full of hardship, but at the end will be eternal brightness.

Under the persecution, I faced hash tests. I passed the test of life and death, yet I failed in front of human “enjoyment.” I was quite depressed.

One day, I was phoned by a fellow practitioner who used to go to the same exercise site as me. He said he had a “gift” for me. I understood the code word. Joy rose in my heart and I immediately set a time and place to meet him.

The gift he brought was the first new lecture Master published since the persecution began.

I read and read. I cried for at least half an hour. Even today, I remember clearly how I felt the first time I read “The Knowing Heart.”

I was ashamed for how weak I'd been during the past few months. Through “The Knowing Heart,” Master’s compassion dissolved the dark cloud surrounding me. I felt the familiar warmth. I found my courage. I felt happy again! I am a Falun Dafa practitioner!

The third incident took place during the filming of “Origin Bound.”

In summer 2019, two months after the film was completed, I received news that I won the Award of Merit for Leading Actor at the Accolade Global Film Competition in the U.S.

I was speechless. Several memories flooded back.

I'd loved performing ever since middle school. During my freshman year in college, I quit my classes and went to Beijing to pursue my dream of becoming an actor. After going through hard times in Beijing and playing many roles as an extra, I finally succeeded in securing a contract as an actor. Later I played in TV series such as “Yongzheng Dynasty,” “Northern Story,” and others, until the feature film, “Origin Bound.”

I really loved performing and I wanted to devote my entire life to this art. I thought I would have many memorable roles, like those famous great actors. But, my acting career was cut short. In April 2001, the 26-year-old me who was at a golden period in my acting career had to give it up and leave my homeland due to the persecution. I thought I would never have another chance to stand in the spotlight. I felt somewhat lost.

In 2017 the New Century Films company was established in the U.S. and I was invited to join. In 2018, I participated in the production of “Origin Bound,” the company’s first feature film.

Honors and success suddenly dropped into my life again. I was overwhelmed.

For the people who watched the film, you may remember the last scene. After going through the drama of life and death, Howard Wang walks with Sue Li along the seaside as the sun rises. Countless seabirds dance against a background of the rising sun’s golden rays, representing hope and happiness. Several audience members were moved to tears during this scene.

On the day we shot that scene, we arrived at the seaside before dawn. The team set up and we waited for the sunrise. Thousands of seabirds quietly sat on the beach.

The photographer joked: “Look at these birds! What a scene it would be if they started to fly when the sun rises!”

The birds must have understood what we wanted. As soon the first rays of sunlight were visible, all of the birds stretched their wings and rose to the sky. Amazingly, they kept circling within camera range. It looked like they were cooperating with the photographer, changing direction exactly when the camera’s angle and position changed. The birds did not leave until after the filming was complete. They made the last scene of the film perfect.

I took part in some of the award ceremonies when the film toured the globe during the film festival season.

I remember very well the Wales International Film Festival ceremony in September 2019. That evening, when the Best Leading Actor was announced, the giant screen displayed “Origin Bound” and my name. This was the third Best Actor award I received for this film. It is hard to believe that just a few years ago I thought my acting career was over!

I began my award speech with these words: “I am a Falun Gong practitioner. In China, Falun Gong has been under the Chinese communist government’s brutal persecution. This film tells us the truth of Falun Gong.”

I am very proud to be a Falun Dafa practitioner and I’m so grateful to Master! It was Master who always protected me, and who mercifully led me from someone who knew nothing to a righteous person.

I am so grateful to Dafa! For the past 22 years, my belief in Truthfulness-Compassion-Forbearance has given me courage in the face of the persecution and enabled me to uphold my conscience and remain compassionate.

Many judges and hosts of the film festivals said the same thing: “This film brings people hope. The protagonist finally finds the great belief (Falun Dafa), which becomes a driving force for self-salvation. It is truly moving.”

I believe that the kindness, compassion, and courage Falun Dafa practitioners show in the film moved the judges’ hearts. Through the film, they saw the wonder of Falun Dafa, and they felt the power of Truthfulness-Compassion-Forbearance.

Some in the audience could not stop weeping while watching the film. The film moved them to think about the meaning and true value of one’s life. They felt the power of Dafa.

The spring of 2020 is unique. A global pandemic has caused prosperous societies to freeze. A tiny virus, which cannot be seen with human eyes, can easily destroy one’s life, or even end it. It’s time for people to ponder: What is the meaning of life? What does the future hold for humanity? Where are we from? Where are we going?

My friends, let me tell you where millions have found the answer to these questions: Pick up Master Li Hongzhi’s book Zhuan Falun and read it!

Zhuan Falun contains the wonders of Dafa and is the source of true happiness.

In honor of the 21st annual World Falun Dafa Day, I wanted to share my story to show my endless gratitude to Master and the joy Dafa brought me. I place my hands together in heshi, and I want to say:

“Convict Starts Practicing Falun Dafa in Prison, Is Persecuted for Her Belief”