(Minghui.org) Today's news from China includes incidents of persecution that took place in ten cities or counties in five provinces, where at least 13 practitioners were recently persecuted for their belief. 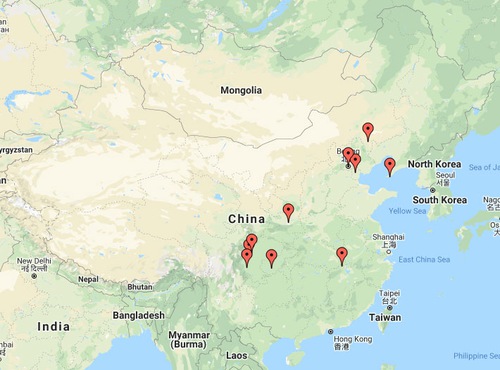 Mr. Wang Chengwu from the Wuqing District was being held in the Wuqing Detention Center. He was transferred to Tangshan Prison in late February 2020.

Mr. Wei Zaiqiang, 59, a former employee of the Hongyuan Factory in Sanyuan County, was arrested on December 8, 2016. He was taken to the Gaoling District Detention Center.

Mr. Wei was sentenced to a four-and-a-half-year prison term on March 13, 2019. He appealed to the Xi’an City Intermediate Court, which upheld the original verdict on April 26, 2020.

Ms. Zhu Xiaomei from Matou Town was arrested by officers from the Matou Police Station on May 7, 2020. Her home was ransacked.

Mr. Zhao Qingshan was arrested by officers from the Shuangshuinian Police Station on February 28, 2020. His computer and Falun Dafa books were confiscated.

Ms. Xie Suqun, 68, and Ms. You Zhigui, 75, were arrested by officers from the Chengxi Police Station in the Xindu District on April 29 for posting informational materials about Falun Gong. Officer Chen Liangqiang videotaped them, recorded their voices, took blood samples from them, and confiscated their Falun Gong materials. Both practitioners were later released.

Ms. Min Keyu was arrested at home on the afternoon of May 8, 2020. Her computer, printer, printed materials, and printing supplies were confiscated.

Ms. Li Yumei from Bairin Left Banner was arrested by the Bairin Left Banner police on the morning of May 7, 2020. Her home was ransacked, and photos of the founder of Falun Gong, Falun Dafa books, laptop, TV set, and printer were confiscated.

Ms. Li was taken to the Bairin Left Banner Detention Center for 15 days, but they allowed her to go home the next day.

Ms. Long Haiyan, 34, and her father from the Jingyang District were arrested by Jingyang Domestic Security Division officers on May 9, 2020. Her father was later released, but Ms. Long remains in custody.

Mr. Yu Zhenqing from Lushun City was arrested by officers from the Shuishiying Police Station on the afternoon of May 5, 2020, for talking to people about Falun Gong.

His Falun Dafa books and printed materials were confiscated. He has since returned home.

Mr. Li Zhihua was arrested by several police on April 26, 2020. His whereabouts are unknown.

Ms. Jia Huiwen, 85, has been missing for nearly ten years. She was persecuted for a long time because of her belief.

“Guizhou Province: Massive Harassment of Falun Gong Practitioners in a “Zero Out” Campaign”