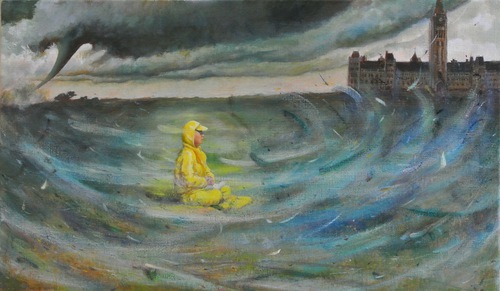 Product description:Practitioners of Falun Gong were holding a public event on the lawn in front of the Parliament buildings in Ottawa, Canada.

When I arrived, I saw that our practitioners were rushing away, loading the last of their equipment into cars and leaving.

There was heavy rain, and powerful winds were picking up debris and small stones and scattering them everywhere. The sky was dark and ominous.

Then I saw the lone practitioner sitting calmly, unmoved. I wanted to rush to join him/her so I pushed the car door hard. But even though I opened it slightly, I could not stand, let alone cross the wide Parliament Hill lawn.

It was only then that I spotted the funnel cloud moving toward the east, toward Parliament. But the tornado did not touch down, there was no disaster, just beautiful cultivation.

I still do not know who he was that was so firm and righteous on that day.