(Minghui.org) May 13 was the 21st World Falun Dafa Day and the 28th anniversary of the introduction of Falun Dafa to the public. Falun Dafa (also known as Falun Gong) practitioners across the world have celebratory activities to mark the occasion.

Group Practice in Front of Brandenburg Gate at Berlin

Practitioners demonstrated the Falun Dafa exercises while some held large banners. Due to the coronavirus pandemic, the Berin government bans gatherings of over 50 people. So some practitioners could not participate in this event. 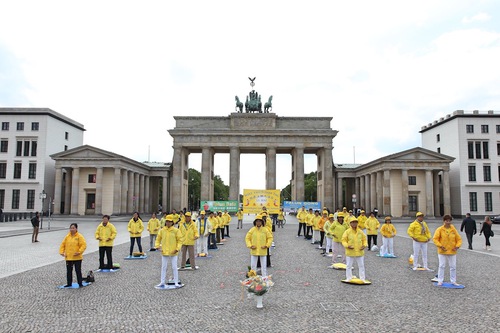 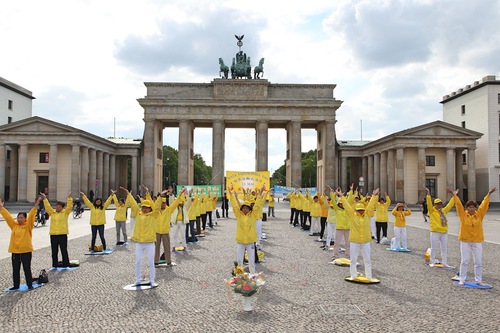 Group practice in front of the Brandenburg Gate at Berlin on May 13. 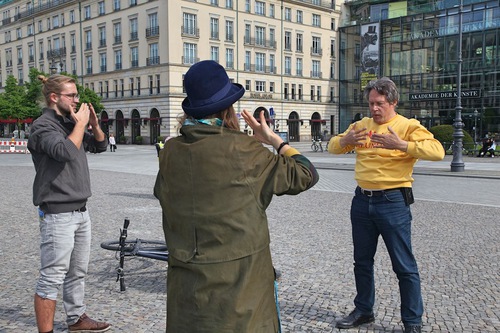 Passersby were much fewer than before. Those passing by paused to watch the exercise demonstration and asked for fliers. Some learned the exercises from practitioners.

“I came here to tell more people about Falun Dafa,” said practitioner Boris Suchin. “I wish to express my gratitude to Master Li (the founder) today.” 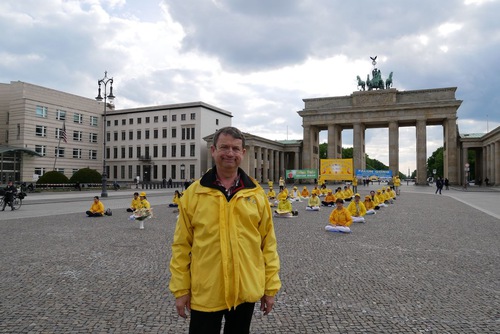 He once saw some practitioners in a park and talked with them. One practitioner gave him the book Zhuan Falun, the main book of Falun Dafa. Since then he started practicing it.

“My lumbar disc herniation disappeared,” he said. He started to think of others and looked within when facing conflicts. Under his influence, his son started practicing it too. 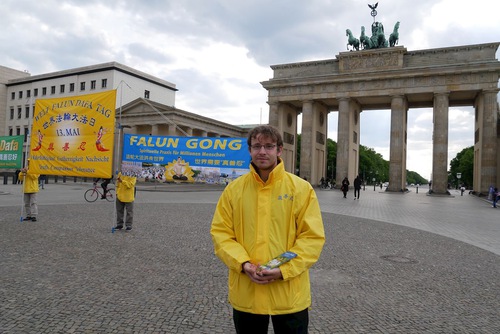 He then learned Dafa by himself for half a year at home in 2010. Later he joined a local group practice site and started practicing it. 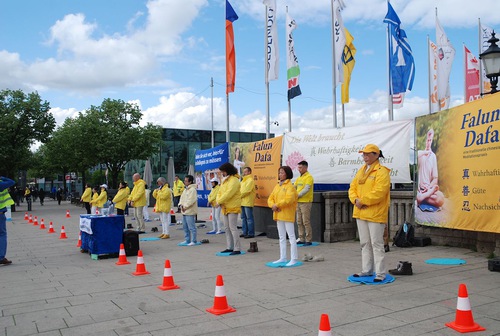 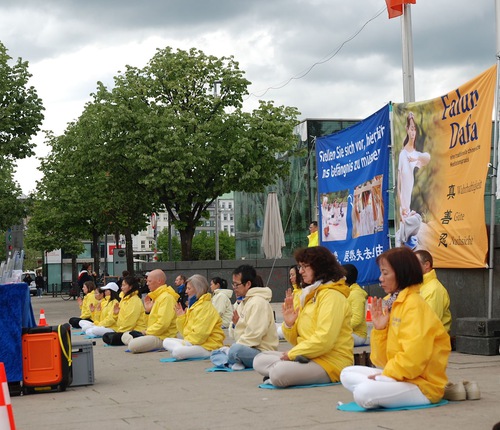 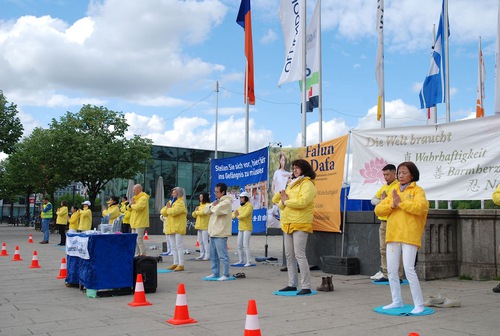 Falun Dafa practitioners demonstrate the exercises at Jungfernstieg in Hamburg 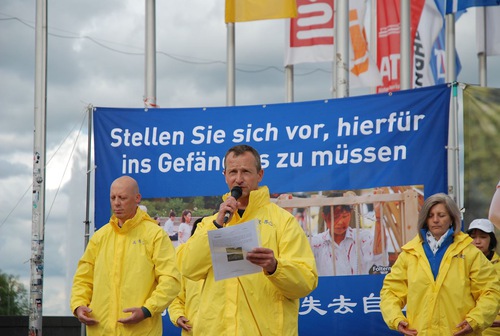 A practitioner reads an open letter to raise awareness about the preciousness of Falun Dafa.

Practitioners demonstrated the exercises. One practitioner read an open letter to raise awareness of the preciousness of Falun Dafa. Passersby came forward to pick up fliers and asked for practice sites. Some signed the petition against the persecution. 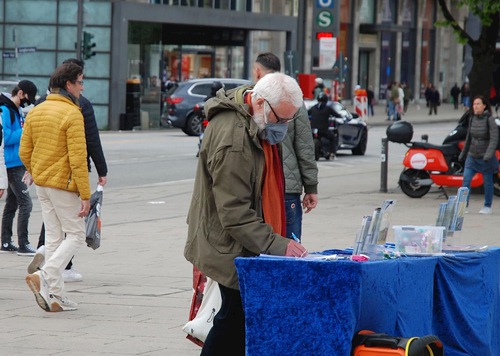 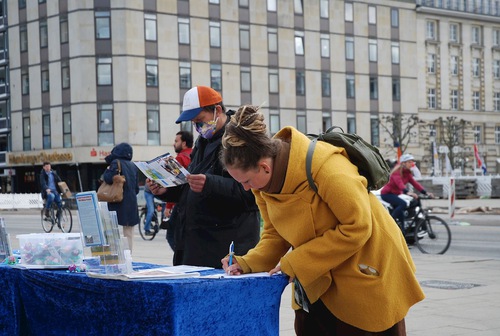 Passersby sign the petition calling for an end to the persecution. 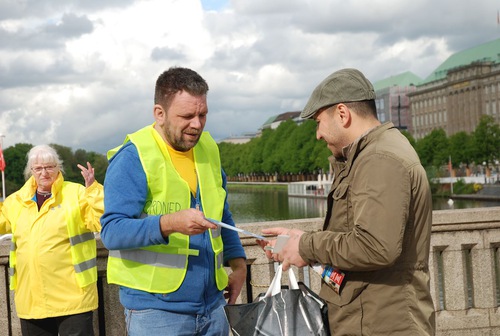 A passerby asks about Falun Dafa 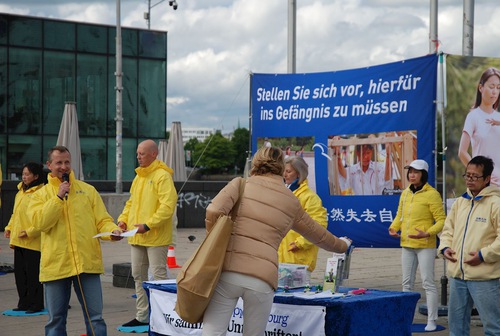 A passerby picks up a flier. 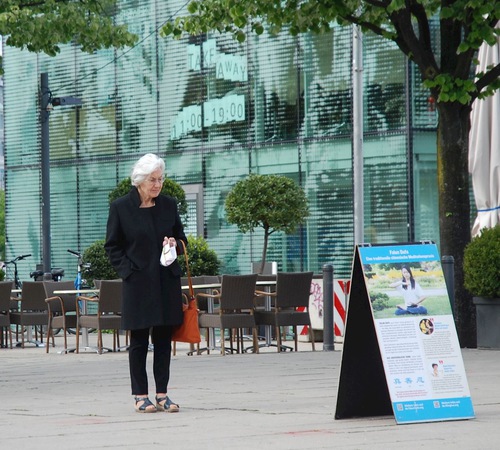 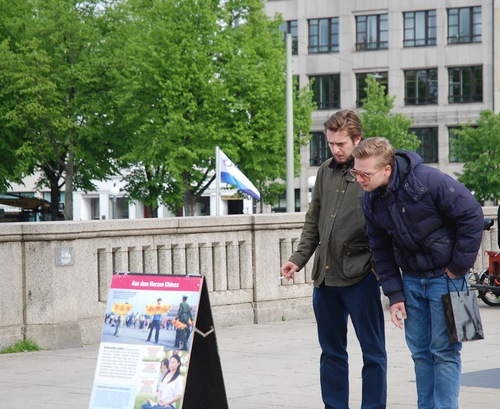 “I cannot describe my feeling with words,” Peter from the Netherlands said after hearing about the Chinese Communist Party's persecution and state-sanctioned organ harvesting from living practitioners. “Live organ harvesting is horrible. I think it is good for you to let the public know about it.” 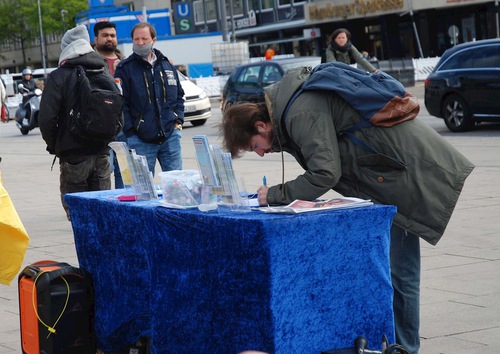 Peter from the Netherlands signs the petition.

“I have goosebumps on my entire body. It is horrible,” said Angera, a local resident. “The brutality is beyond imagination. I just signed the petition because I think everyone should speak out against this horrible act and help stop the persecution.” 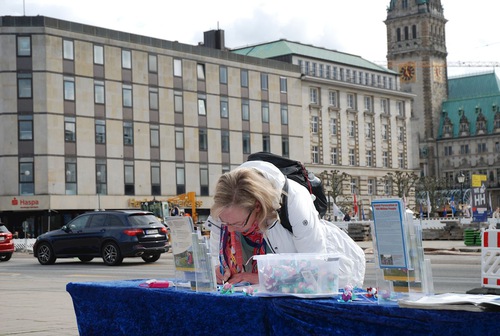 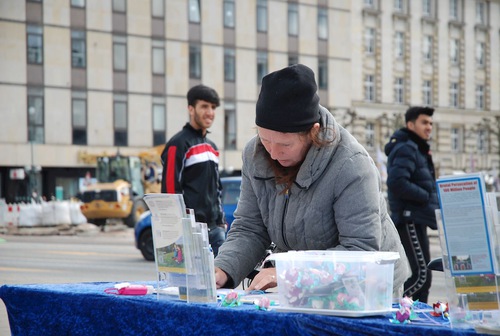