(Minghui.org) It was 28 years ago when on May 13, Falun Dafa, also called Falun Gong, was first introduced to the public and began spreading around the world. The founder of Falun Gong, Mr. Li Hongzhi, taught about the universal principles of Truthfulness-Compassion-Forbearance, benefiting tens of millions of people who found improved health and moral elevation as a result. 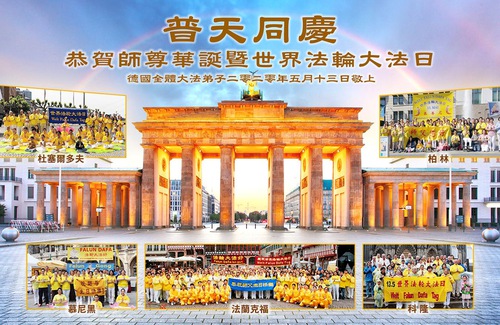 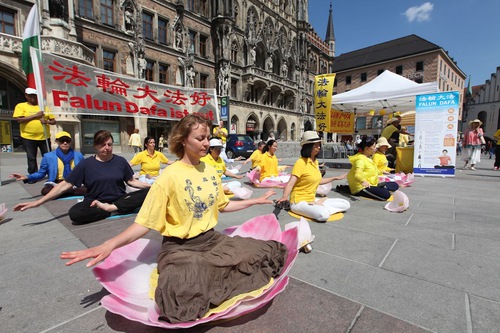 Iris Lindenmaier participated in the World Falun Dafa Day celebration at Marienplatz in Munich on May 13, 2018.

“I am very fortunate,” said Iris Lindenmayer, “to have practiced in this wonderful Dafa for 23 years, and am very honored to have met Master several times. I understand that everything I get in life is meaningful. Whether it is good or bad, it is to improve myself. Master gave me this opportunity, and I am grateful to Master for this.”

Iris’ sister had been searching for spiritual enlightenment and looked at qigong and other religious practices, as well as Christianity. When her sister told her about Falun Gong in 1997, Iris was trying something else that her sister had taught her. She didn't want to switch immediately, so she turned her sister down.

Later, Iris’ sister told her about the German translation of Zhuan Falun, the main text of Falun Dafa. She said that unlike other books, which only talked about exercises, this book taught about faith. “I started reading the book,” she said, “and immediately realized I wanted to learn it.”

Iris grew up being a little different from other people because she was not interested in disco or other forms of entertainment. “I thought I was a freak,” she said, “and could not fit in with society. I thought something was wrong with me.” After reading Zhuan Falun, she understood so much more about enlightenment: “It turned out that my understanding was right. I started practicing Falun Gong because I always wanted to be a good person.”

“In the past, I often suffered from tonsillitis. After practicing Falun Gong, I no longer had this illness,” said Iris. She also became patient and no longer got upset when others disagreed with her. “In the past, if people couldn’t understand me immediately, I always arrogantly thought they were stupid. Now, I learned to be patient and would think, ‘how can I help him understand?’”

Iris grew up introverted, relying on her parents and sister for everything, and felt she wasn’t capable of doing anything herself. After practicing Falun Gong, she became confident and no longer asked for help when taking on a task. “This was because I always had Master’s help at critical moments,” she said. She attributed these achievements to practicing Dafa.

She said Master had been protecting her all along, adding, “After cultivating in Dafa, I am no longer afraid because I firmly believe that Master can help me.”

During 23 years of cultivation, Iris has traveled all over Europe and the U.S. to participate in Falun Dafa activities. She shared her reason for spending personal savings on participating in these activities.

“When the Chinese Communist Party (CCP) began persecuting Falun Gong, I found it hard to believe. How could anyone persecute such a good practice? I thought there must be some misunderstanding and that the persecution would end in a few weeks.”

But it didn’t end. Iris began to participate in various activities to raise awareness. “In China, people who practice Falun Gong are persecuted. I think it is wrong because we are doing the right thing,” she said. “I wanted to make a difference.”

“China has a civilization of 5,000 years, and people were of noble character, upheld moral values, and respected others throughout the dynasties. Since the CCP took power, it has systematically destroyed Chinese morality and culture.

She hopes more Chinese can calm down, find out more about Falun Gong, and learn why so many Westerners are impressed with Falun Gong–a cultivation practice rooted in traditional Chinese culture.

“Thank you, Master, for taking care of me and helping me practice steadily,” said Mrs. Liang, who resides in a small town in southern Germany. “Master has done so much for the entire world; Master is really working too hard.”

Mrs. Liang lived with a Falun Gong practitioner in Germany at the end of 2006. Mrs. Liang practiced with her. One day, Mrs. Liang couldn’t fall asleep, so she did the fifth exercise, the sitting meditation, that she just had learned. Soon after she began, images suddenly appeared on her forehead like a movie, frame after frame, from left to right.

Then, a big eye appeared in front of her. She hadn’t read Zhuan Falun and didn’t know what was going on. Later, after reading Zhuan Falun, she understood that her celestial eye had opened.

Her housemate had many books of Master’s lectures. “I took a look and liked it very much, so I asked her to let me read more.'

Mrs. Liang used to enjoy reading books about fengshui and fortune-telling, and she had heard about some cultivation terms that circulated in the southern Chinese countryside. “After reading Zhuan Falun, I understood why those books were written that way and what the authors were trying to convey. So I wanted to keep reading Zhuan Falun,” she said. That was how she began to practice Falun Gong.

She actively participated in truth-clarification activities and had undergone great changes in body and mind. For years, she would have migraines as soon as she was exposed to wind. She had to wear a thick hat at all times.

After practicing Falun Gong, she was excited and happy, and she completely forgot about her migraine. A few years later, while sharing her experiences, she recalled the severe migraine she once had.

“I used to have a short temper, but it became better after I read Zhuan Falun. I learned to be patient, which I couldn’t do in the past.

“Now if someone scolds me, I don’t feel anything,” she said with a smile. “I’ve read some books about Chinese culture, and [in the past] I often got straight to the point. When others said something wrong or couldn’t understand something, I would get anxious and criticize them. After studying Dafa, I learned to be tolerant.”

Ms. Liang often senses Master helping her, especially since the passing of her husband three years ago. She was full of grief and fear. She woke up in the morning and hoped it would be dark soon. She wanted the days to pass quickly. This state lasted for two weeks.

One day, she realized she should not be in that state because she was a courageous person to begin with. She sent forth righteous thoughts, drove away the demons that interfered with her, and was no longer afraid.

Living in a foreign country by herself, she couldn’t stop thinking about her late husband. Although she studied the Fa, did the exercises, and sent righteous thoughts every day, she couldn’t change her situation, and it lasted over a year.

Later on, Mrs. Liang realized she couldn’t go on like this anymore, and she started hand-copying the Fa. Within only three or four days, the situation changed.

“Master removed the substance of grief for me. When I talked to others about my husband, I no longer burst into tears. Some time later, Master took away the attachment of lust from me as well.” After hand-copying the Fa for three months or so, her celestial eye saw a shell that looked like her face fall off. Later, when sitting in meditation, she felt like she was levitating.

“Master was encouraging me so that I could firm up my cultivation,” Ms. Liang said. Her experience tells her that no matter what difficulties she encountered, believing in Master was instrumental for her passing the test of sentimentality.

Ms. Liang said she is distressed that many Chinese people, both in China and abraod, have been indoctrinated by the CCP and do not understand the truth of Falun Gong. She hopes people will not believe the CCP easily.

“You can only understand something if you think about it and read more about it. If you only listen to one side of the story, you will lose the ability to think. You have to listen to both sides at least,” she said.