(Minghui.org) May 13, 2020, is World Falun Dafa Day. This date also coincides with the founder, Mr. Li Hongzhi's, birthday. Twenty-eight years ago, Falun Dafa (also known as Falun Gong) was introduced to the world by Mr. Li Hongzhi in Changchun, China. Falun Dafa is easy to learn and suitable for all ages, with five sets of exercises. In just a few years, millions of people worldwide began practicing by following the guiding principles of Truthfulness-Compassion-Forbearance. Falun Dafa is now practiced in more than 100 countries and regions in the world. The main book of teachings, Zhuan Falun, has been translated into more than 40 languages.

The young practitioners are healthy and flourishing under Master’s guidance and protection. Due to the restrictions imposed by the coronavirus, the young practitioners, their parents, and teachers in Melbourne were unable to take a group photo. They expressed their sincere gratitude to compassionate and great Master Li Hongzhi through videos. 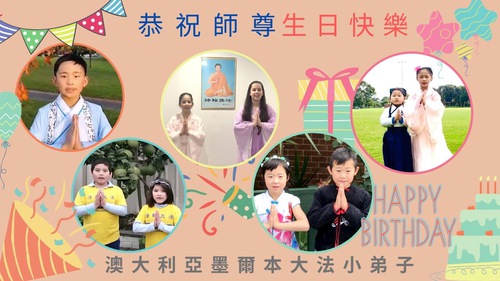 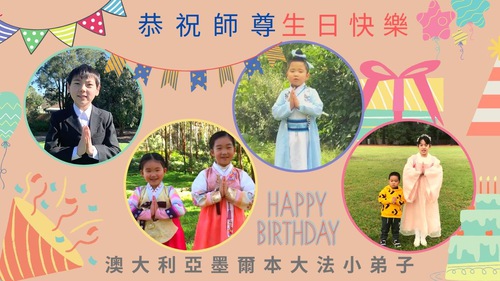 Able to Have Children after Practicing Falun Dafa 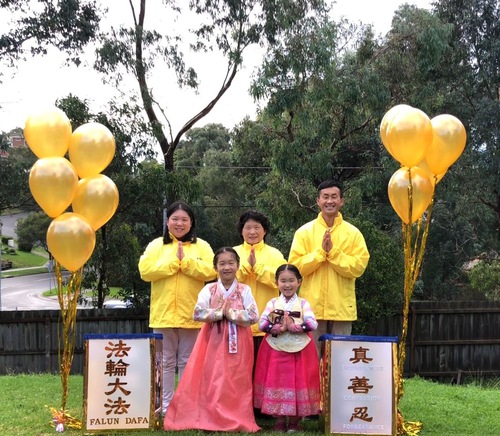 Ms. Sun suffered from polycystic ovaries before she practiced Falun Dafa. She sought medical treatment everywhere but in vain. She relied on hormonal medicines for more than ten years. The doctor said the possibility of her getting pregnant was very slim. Just one month after she began practicing Falun Dafa in 2008, Ms. Sun’s body began functioning normally and she soon had two lovely daughters. Ms. Sun's husband is Korean. His wife's recovery inspired him to start practicing and cultivating himself. Ms. Sun's family is now harmonious

Ms. Sun said: “My two daughters became selfless after they recited the poems in Hong Yin. They understand how to deal with conflicts between their classmates. Children's safety or health problems concern their parents. In today's society there are bad phenomena such as competition, or forming cliques in school. But I feel relieved because I know that Master always protects them. Once a girl scratched my elder daughter Huihui’s face, but Huihui said she didn’t mind. I was very happy for her. Dafa taught my children how to face conflicts and how to improve themselves. Thank you Master for everything! Our family wishes Master a happy birthday!”

Zhang Shuo just celebrated his fifth birthday. His mother said that they've taken him to the weekly group Fa study since he was two years old. Zhang Shuo always quietly listened while the adults read. When he became sleepy, he lay down next to his mother and slept.

Shuo’s parents began bringing him each time they went to Fa study. His mother said he was naughty like other children at times, but was always very quiet when they read the Fa. Within just a few months he was able to memorize and recite Lunyu.

Little Shou now recites Hong Yin with the other young practitioners. To his parents' surprise, he not only recites the teachings, but he also reminds them and requires of himself to follow Falun Dafa's principles.

For example, sometimes his mother could not help losing her temper when he failed to finish something on time. He says, “Mom, be calm and be tolerant.” Whenever he had conflicts with other children in kindergarten, he told his mother that he would do better next time.

One day last year, he suddenly started to have a nosebleed, and it looked very serious. The usual method of stopping the bleeding didn’t work. His mother said, “Should I ask Master to help you?” He immediately answered, “Please ask Master to help me.” The nosebleed soon stopped. The next morning he told his mother that he saw Master, and he smiled at Shou and praised him.

Zhang Shuo also clarifies the truth. When his parents phones their friends or relatives in China, he tells them, “Falun Dafa is Good, Truthfulness-Compassion -Forbearance is Good! Falun Dafa was wronged.”

There's an old Chinese couple in their neighborhood. One day they told Shuo’s mother that the lady had cancer and needed two operations. When Zhang Shuo heard this, he immediately said, “Grandma, you should sincerely say Falun Dafa is Good! Truthfulness -Compassion-Forbearance is Good! You will be safe and healthy!” The old man was very happy and asked his mother how she brought up such a kindhearted boy. Since then, every time they saw Shuo they chatted with him and invited him into their home. Shuo's mother told them it was Master and Dafa that helped Zhang Shuo understand and live by the principles of Truthfulness -Compassion-Forbearance. 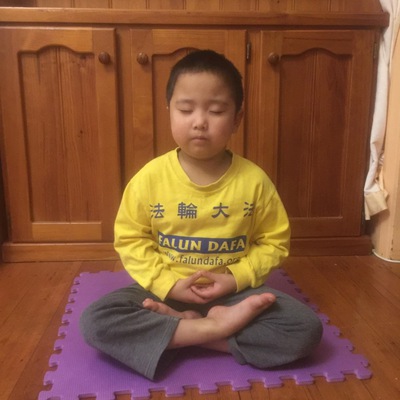 Little Shuo's mother is grateful to Master and said, “My whole family wishes Master a Happy Birthday! Thank you Master!”

Young Western Disciple: Learning to Treat Everyone with Kindness 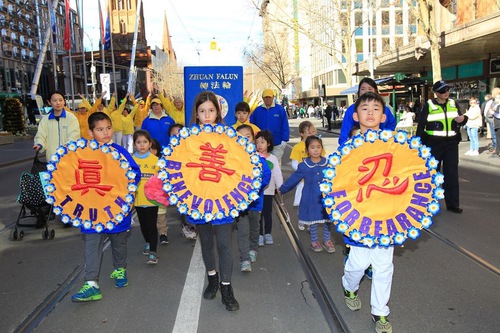 On July 20, 2019, Violeta Thodori (middle) participated in the Falun Dafa Parade in Melbourne

Violeta Thodori, is a 13-year-old practitioner from Greece. She and her sister were born into a practitioner's family. She said, “I learned that good is rewarded with good and evil is met with evil at an early age. When I was seven years old, I started reading Zhuan Falun with my family. I learned to follow the principles of Truthfulness-Compassion-Forbearance. My friends are very curious about why I never get angry. I told them it was because I learned to endure.”

Violeta said that practicing Falun Dafa helps her, “I learned to treat everyone with kindness. I never say bad things. Sometimes, I would share what I learned from Zhuan Falun with my friends. My heart is very calm because I never hate anyone, which makes me different.”

She said, “Thank you very much Master for teaching me and guiding me to be a good person. Falun Dafa is good! Truthfulness-Compassion-Forbearance is Good! Happy Birthday, Master!”

Seven and a half year old Henry and six year old Emily experienced positive changes after reciting Hong Yin. Their mother said, “Thank you Master, for opening their wisdom. Three months ago, the young practitioners in the Minghui school began reciting Hong Yin. Now they can recite nearly 20 poems. They are now reciting Lunyu. The children have changed a lot, especially Henry. He studied in a Chinese school for two years and didn’t know much about the characters. He disliked learning Chinese and stopped going. Through memorizing the Fa, he gradually changed and was very willing to read Zhuan Falun. Now he reads it very well. He has started to look inward.”

Xinxin is in grade two, and she's practiced Falun Dafa with her parents since she was very young. She said, “A classmate always bullied me, but I did not hate her because I knew that she was giving me virtue. I dreamed that I saw a Falun spinning in front of me to protect me from a bad person. One day when I closed my eyes, I saw something bad on my right side and a Falun on my left. The Falun destroyed it.”

Xinxin’s mother, Ms. Zhang, said, “I began practicing in China with my grandma when I was a kid. I remember the days I went to the Fa study group with my grandma in the evenings. I remained calm when I was bullied in school and people all said I had a good personality.” She added, “Now I feel very relieved when I see the changes in my daughter. When I'm not diligent, Master uses the children’s mouths to remind me. I felt very happy and lucky when my child studies the teachings with me. Thank you Master for your merciful protection!” 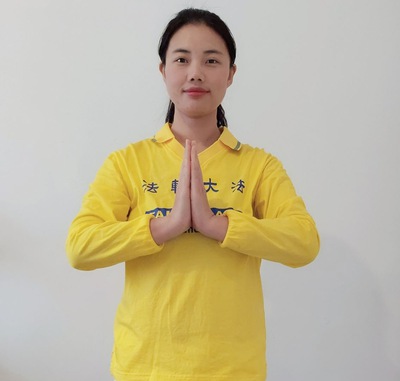 Ms. Hao, a teacher from the Minghui class in Melbourne, wishes Master Li a happy birthday

Ms. Hao, 32, is a teacher in the Minghui class in Melbourne, and the children love her class. After the coronavirus outbreak in Australia, young practitioners learn and practice the exercises through the Internet. They improved greatly.

She said that tears come to her eyes whenever she thinks of Master’s compassion, “Master did not give up on me. He arranged for me to practice abroad, and gave me the opportunity to make up for my mistakes. I will remember Master ’s teachings and persist in cultivation. I will study the Fa well and eliminate my attachments and notions. I will fulfill my prehistoric vows.

She presented a poem to express her gratitude and respect to Master Li Hongzhi. She wishes compassionate and great Master happy birthday, and congratulations on World Falun Dafa Day!