(Minghui.org) More than 100 Falun Gong practitioners gathered on a public square in Hong Kong to do the exercises together during the last weekend of March 2020. Many local residents were drawn to the tranquil music and the fluid exercise movements. Several stopped in their tracks to learn the exercises. 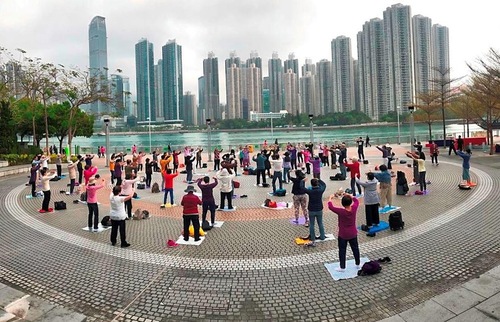 Practitioners do the exercises on a public square in Hong Kong. 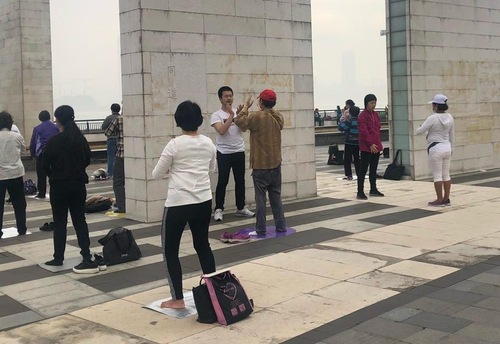 Passersby stop to learn the exercises.

Raising Awareness about the Persecution During the Epidemic

Ms. Liang, a Falun Gong practitioner, said that, after media outlets such as NTDTV and The Epoch Times reported on the Chinese Communist Party (CCP)'s use of rumors and slander to vilify Hong Kong's student protestors last year, many Hong Kong residents were better able to understand the communist regime's persecution of Falun Dafa in China.

When Hong Kong students were protesting the extradition bill, NTDTV and The Epoch Times reported on the protests, as well as on the CCP's attempts to deceive mainland Chinese to incite nationalist hatred of Hong Kong's protestors.

More people have since begun inquiring about Falun Dafa, so local practitioners decided to hold large-scale group exercises over the last several weekends.

Ms. Liang said many practitioners could feel a strong energy field at these large exercise sessions and were motivated to establish more, smaller group exercise sites around Hong Kong.

Ms. Liang related an incident about a young police officer who came to an exercise site and chatted with her. The officer told her his job was very stressful and the hours were long, so she suggested he learn Falun Gong. She told him she had been practicing for two decades. He was astonished: “You look so youthful, like you’re in your 20s. It's unbelievable that you’ve been doing this for 20 years.” Ms. Liang is actually in her 40s. 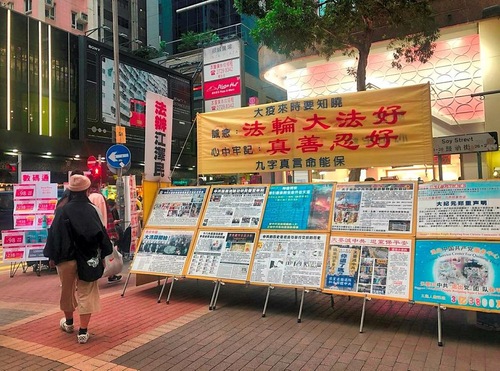 Despite the CCP virus (Wuhan virus), practitioners continue to inform people in Hong Kong about the persecution in mainland China.

The Hong Kong Falun Dafa Association was legally established in Hong Kong in 1996 and is protected by local laws. Although practitioners in Hong Kong have been raising awareness about the persecution for the last two decades, many people had found it hard to believe that China's communist regime could be so ruthless. After living through the CCP's repression last year and seeing the police violence and the corruption of the legal system firsthand, Hong Kong citizens as a whole have gradually come to realize that what Falun Gong practitioners have been saying all this time is true. Many of them have stepped forward to show their support for Falun Gong.

A young woman interviewed by a Minghui correspondent in Hong Kong said, “I want to apologize to Falun Dafa practitioners and The Epoch Times media. I was influenced by the CCP's propaganda, and I used to think you were a cult. I was against The Epoch Times. But after I took part in several protests last year, I was moved by The Epoch Times' and NTDTV's reporters' determination to be on the front lines to report what was happening. Compared to other media outlets, the Falun Gong media reports are truthful and objective and cover issues from many angles.” 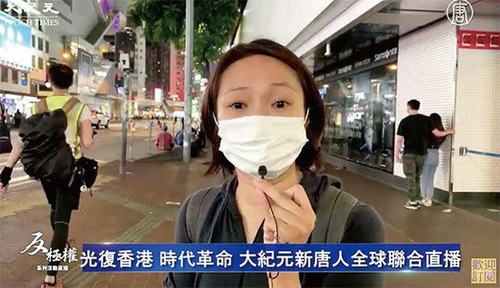 “I'm ashamed of my previous misconceptions,” she continued. “I would like to take this opportunity today to say 'I'm sorry' to all Falun Dafa practitioners and express my highest respect and gratitude.”

Hong Kong citizen Mr. Yang said locals had seen the true colors of the CCP over the past few years. He attributed this to Falun Gong practitioners' unrelenting efforts to expose the regime's atrocities.

“You are truly resilient, raising awareness of the persecution all over the world all the time,” he said. 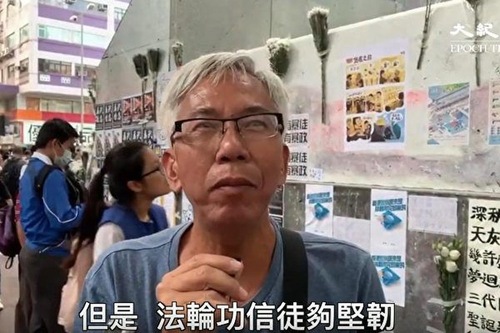 Many Hong Kong citizens have also left comments on social media platforms to show their support and apologize for misunderstanding Falun Gong in the past. Below are some of their comments:

“In the past, I refused to believe the CCP was taking organs from Falun Gong practitioners and selling them for a profit. I want to apologize to practitioners.”

“I am sorry. I was misled by the CCP all this time. Many Falun Gong practitioners have died for their belief. I thank The Epoch Times for having the courage to tell the truth.”

“After living through the protests, I now realize how brutal the CCP's persecution of Falun Dafa practitioners is.”

“I learned from family members who were formerly CCP members that organ harvesting is true and that even more terrible things are going on.”

On many occasions, Mr. Wong has removed derogatory banners hung by pro-CCP extremists. “They are a form of brainwashing,” he said.