(Minghui.org) Falun Dafa practitioners held a peaceful protest in front of the Chinese Consulate in Nagoya on April 25 to mark the 21st anniversary of the April 25 appeal. They called on the Chinese Communist Party (CCP) to stop the 21-year-long persecution. 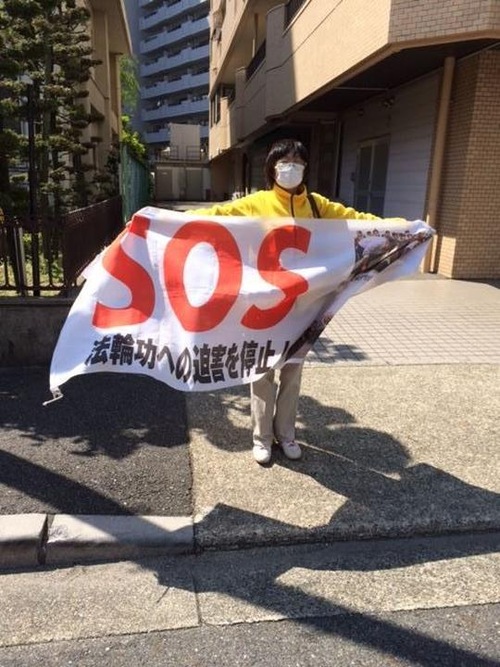 A Falun Dafa practitioner holds a banner in front of the Chinese Consulate in Nagoya.

Following the unjust arrest of 45 practitioners in Tainjin, China in April 1999, approximately 10,000 Falun Dafa practitioners went to Beijing on April 25 to peacefully appeal for their release and for the right to practice their belief. Each year, practitioners worldwide hold events to raise awareness of the 21-year-long persecution, which was launched that July.

Due to the CCP virus pandemic (coronavirus) the Aichi government is asking residents to avoid going out in public. When a police officer stopped by the protest, a practitioner explained why they hold the event each year. Practitioners wore face masks and gloves.

The policeman said he knew about Falun Dafa and the persecution from talking with practitioners previously and reading information online.

The officer said he understood why the practitioners were holding their event. The protest continued uninterrupted, and concluded over an hour later.

“A Monument to Morality: The April 25 Peaceful Appeal”