(Minghui.org) Today's news from China includes incidents of persecution that took place in ten cities or counties in six provinces, where at least 22 practitioners were recently persecuted for their belief. 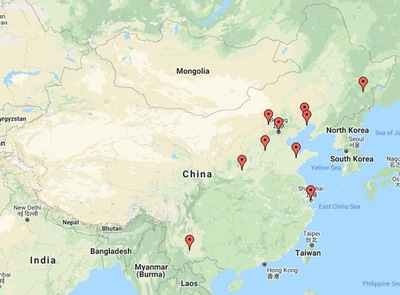 Ms. Yang Zixiang, 76, Ms. Wang Xiulan, and elderly Ms. Peng Caiwen were arrested by plainclothes officers and the SWAT Team on April 19, 2019, for talking to people about Falun Gong at a farmers' market in Changle County. They were taken to the Qiaoguan Town Police Station

The police took Ms. Yang to Weifang City No. 2 Hospital for a check up the following day. She was then taken to the Weifang Detention Center, but they refused to admit her. Ms. Yang was held in custody for three days, before being released. Her family was forced to pay 2,800 yuan. Ms. Wang and Ms. Peng were also released.

Ms. Li Lingzhen, in her 50s, was reported to the authorities on March 23, 2020, for talking to people about Falun Gong. She was arrested, and her home was ransacked. The police confiscated Falun Dafa books, a computer, and about 20,000 yuan in cash. Ms. Li was released after her family paid the cost for bail.

Five practitioners over seventy years old from the Chaoyang District and Changping District (near Tiantongyuan) were arrested recently. They were monitored and followed when they were distributing Falun Gong materials. Their homes were ransacked. They were released two days later.

Ms. Li Xiujuan from Yanjiazhuang Village, Yanjiazhuang Township, had been displaced for months. Officers from the Linyi County Domestic Security Division and the Yuncheng City Police Department pried open the door to her rented home in the Yanhu District and arrested her on April 10, 2020. They ransacked the place, and confiscated three cell phones and some cash.

Ms. Cao Shujie was arrested by officers from the Qixing Police Station in the Dong’an District on the afternoon of March 23, 2020, for distributing Falun Gong materials. Her home was ransacked that evening, and Falun Dafa books, a USB flash drive, DVDs, and photos of the founder of Falun Gong were confiscated. Ms. Cao was held in custody for ten days, before being taken to a detention center. However, the detention center refused to admit her due to the coronavirus outbreak. She was later released.

Officers from the Yangming Police Department and the Qianjin Police Station deceived Ms. Zhang Cuizhi into opening her door. They arrested her and Ms. Zhang Li, who works as a nanny at her home, on the morning of April 13, 2020. The officers confiscated Ms. Zhang’s laptop, several cell phones, and Falun Dafa books. Both practitioners were released that evening.

Ms. Li Ruiying was arrested by officers from the Wuyilu Police Station on April 6, 2020.

Mr. Zhao Lin, 68, was arrested by officers from the Shenglilu Police Station on the morning of April 7. He was taken to the Zhangjiakou City Detention Center, and recently transferred to the Yu County Brainwashing Center.

Mr. Zhang Shuqiang from the Pudong New Area was arrested by officers from the Shanggang New Village Police Station on the morning of April 16, 2020. He was placed under administrative detention.

Mr. Fan Zhigang and his wife Ms. Su Shuang from the Longgang District were arrested at home by officers from the Xijie Police Station, the Longgang Police Department, and personnel from the Guoyuan Residential Community on the morning of April 15, 2020. They are being held in the Huludao City Detention Center.

Ms. Yan Shufang and Ms. Jing Qin were reported to the police on the morning of March 29, 2020, for talking to people about Falun Gong. They were arrested by officers from the Chengqu Police Department, and their homes were ransacked.

Officers collected sound, facial, and eye characteristics from the two practitioners at the Chengqu Police Department. Both practitioners were released later that evening.

“The Power of Dafa”

“Limitations of Modern Science in Detecting Light and Sound”