What Can We Learn from the Sudden 50% Increase in Wuhan's Coronavirus Fatalities?

(Minghui.org) Wuhan, the epicenter of the coronavirus pandemic, revised its death toll by 50.02% on April 17. With 1,290 coronavirus deaths “newly” identified, the previous death toll of 2,579 increased to 3,869 for the city of 11 million people. For comparison, New York has reported 10,022 coronavirus deaths as of April 18, and its population is 8.4 million.

More and more governments and people are questioning the credibility of China's coronavirus data. Some analysts suspect Wuhan's near “perfect” percentage increase (almost exactly 50%) is a response to the mounting calls for data transparency in China, but still even the revised number is nowhere near the actual casualties.

In this article, we will examine more examples like this and explore ways to interpret them.

Barron’s, an American magazine on finance and statistics, published an article on February 15, 2020, titled “China’s Coronavirus Figures Don’t Add Up.”

“The number of cumulative deaths reported is described by a simple mathematical formula to a very high accuracy,” wrote author Lisa Beilfuss. “A near-perfect 99.99% of variance is explained by the equation.”

Melody Goodman, associate professor of biostatistics at New York University’s School of Global Public Health, agrees. “I have never in my years seen an r-squared of 0.99. As a statistician, it makes me question the data.” She said real epidemic data are never perfectly predictive because of the many variables involved and that 0.7 would be considered a “really good” r-squared. “Anything like 0.99 would make me think that someone is simulating data. It would mean you already know what is going to happen,” she explained.

China reported zero coronavirus deaths on April 6, for the first time since the crisis began in January, but many doubted how a country with 1.4 billion people could achieve such a statistic while infection and death cases exploded in other nations.

“China has a bad reputation when it comes to providing official numbers that the world believes,” BBC’s reporter Robin Brant wrote on April 7 in an article titled “Coronavirus: Why China's claims of success raise eyebrows.”

Brant pointed out that before the pandemic, China had always been able to achieve around 6% GDP growth with virtually no margin of error. “No comparable economy has numbers that deliver on this suspiciously consistent level,” he noted. “Independent analysis using provincial electricity-generating figures suggests a lower GDP than official figures,” he said.

Another example is the ratio of coronavirus deaths compared to confirmed cases. In a letter to The New York Times on February 7, American writer Frankie Huang described her experience of being quarantined in Shanghai. “Yesterday, I saw on social media that someone noticed that the ratio in the official figures for the total dead to the total diagnosed cases has remained exactly 2.1 percent every day since Jan. 30. ‘This magical virus is very good at math!’” she wrote.

No other nations have such “stable” statistics. Japanese finance minister Taro Aso said on March 19 that he did not believe numbers reported by China. U.S. House Foreign Affairs Committee ranking member Michael McCaul said in a statement that the Chinese Communist Party (CCP) “lied to the world about the human-to-human transmission of the virus, silenced doctors and journalists who tried to report the truth, and are now apparently hiding the accurate number of people impacted by this disease.”

“Although the CCP has a long history of lying to their own people and the global community, I still find it shocking the lengths their regime will go to in order to protect their power,” McCaul said, adding he had asked the state department to open “a multilateral investigation into the CCP’s coronavirus cover-up.”

Tencent QQ, an instant messaging service and web portal in China, once reported a death toll of 24,589 on February 1. On the following day, however, the number was revised to 304. Some suspected Tencent QQ had two sets of statistics, one for internal tracking and one for public use.

Despite the disinformation, many other statistics published in China gave outsiders some clues of the pandemic’s scale. A recent survey in Wuhan with 3,600 medical staff from Zhongnan Hospital showed 2.4% of them had developed antibodies to coronavirus; another survey with 5,000 non-medical-worker residents also yielded similar results, according to a report titled “Wuhan Tests Show Coronavirus ‘Herd Immunity’ Is a Long Way Off” and published in The Wall Street Journal on April 16.

Based on conservative figures and assumptions, a separate report by Derek Scissors of the American Enterprise Institute estimates 2.9 million total cases in China, rather than the total of about 82,000 Beijing had reported, wrote The Wall Street Journal on April 13 in an article titled “China Still Misleads the World on the Coronavirus.”

China is the only major country that does not publish how many people have been tested for coronavirus. In the United States, for example, about 3.7 million have been tested so far. With 95 labs, over 120,000 tests are performed each day. Even in Taiwan, nearly 10,000 tests are conducted every week, and the test results provide key information that can be used to control and prevent the disease.

Several observations have also given some hints about the number of people who have died of coronavirus. On February 3, an employee of Wuchang Funeral Home said, “We have been working 24 hours a day since January 27. Our four phone lines are operating 24 hours a day, and the staff is exhausted.”

Former host of China Central Television (CCTV), Li Zehua, visited a crematory in Wuhan on February 21 and confirmed the heavy workload in Wuhan’s crematoriums. Li said that, by the time he left around 11 p.m., the furnaces were still running.

In addition, the authorities deployed 40 mobile incinerators to Wuhan in mid-February, claiming they were being used to burn animal carcasses and medical waste. Each incinerator can burn up to 5,000 kg of waste per day. Assuming an average weight of 65 kg per person, one incinerator could burn approximately 77 (=5,000/65) bodies each day. If all 40 incinerators worked simultaneously, they were capable of handling 3,080 (= 77 x 40) bodies each day. 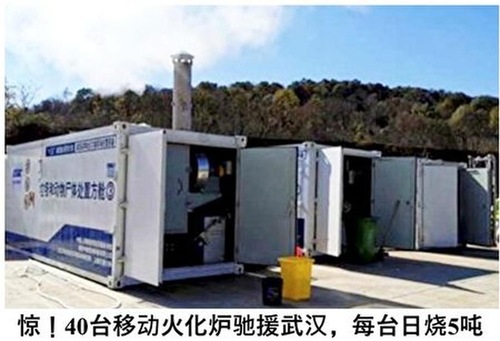 Forty mobile incinerators were transported to Wuhan. Divided into three sections, “solid crushing, burning, and air purification,” each of these incinerators has a capacity of 30 cubic meters (or 40 cubic yards) and can process 5 tons (about 11,000 pounds) of materials every day.

From officially published numbers, however, there were about 3,300 coronavirus deaths nationwide between January 12 and April 12, and 2,500 were from Wuhan. If the numbers were to believed, it would have taken the 74 furnaces less than two days to burn the bodies, which could contradict the fact that the furnaces were running nonstop.

Another hint came from the urns of deceased coronavirus patients in Wuhan. According to Radio Free Asia, the seven major funeral homes in Wuhan distributed 500 urns every day to the surviving families between March 23 and April 4. This alone would translate into 45,500 deaths (= 13 days x 7 funeral homes x 500 urns), a figure on par with the 42,614 figure derived above by looking at the number of bodies Wuhan's furnaces were capable of processing by working nonstop.

Caixin reported that Hankou Funeral Home in Wuhan received two shipments of 5,000 urns over the course of two days (March 25-26). That would account for 10,000 deaths, still more than the officially reported number of cases.

For the CCP, statistics is a political tool that can be employed at will to achieve its political agenda. During the Great Leap Forward in the late 1950s, for example, crop production was boasted to be as high as 150 times the actual output during the period of political fanaticism. With the “unusually high” crop production, China exported much of its crops, leaving little for its own people. Independent investigations from multiple sources estimated that 45 million had starved to death during the famine.

This time, the CCP suddenly increased the death toll in Wuhan by 50%. It cited overwhelmed medical resources and the admission capacity of medical institutions, as well as previously unreported coronavirus deaths at home, as reasons for belated, missed, and mistaken reporting.

What the CCP did not mention in its revision of the death toll is that Wuhan medical professionals and other citizens were forbidden to disclose or discuss information about the outbreak. Wuhan, as well as other parts of China, had been under pressure to keep the numbers low or near zero.

For example, Heilongjiang Province in northeastern China has reported nearly zero new coronavirus cases in the past few weeks. With less than 500 reported cases across the province, only 40 were from Qiqihar City, a region of over 5 million residents.

A staff member of Qiqihar First Hospital disclosed in March that more than 200 staff members in that hospital alone had been infected with coronavirus as of two weeks earlier. In particular, nearly everyone in the orthopedics and clinical lab departments was infected. But the information was hidden from the public.

On February 21, two officials in the capital city of Harbin in Heilongjiang Province were removed from their posts for reporting coronavirus cases. Since February 22, no new cases have been reported for the city.

“After seven decades in power, the [Chinese Communist] party still depends on a governance system that combines arbitrary rule, brutal repression, eye-popping corruption and massive levels of deception, fraud and abuse,” wrote a Wall Street Journal article on April 13 with the title of “China Still Misleads the World on the Coronavirus.”

“Why Did the Wuhan Coronavirus Spare Most of My Family?”