(Minghui.org) “It’s shocking,” said faculty and students at McGill University after viewing the documentary Letter from Masanjia on February 28, 2020. Attendees said they were deeply touched by the personal experience of Falun Gong practitioner Sun Yi, who was featured in the film. 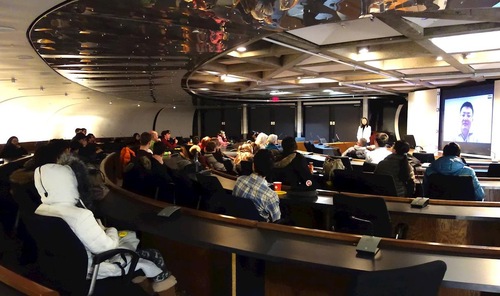 Mr. Leon Lee, director of Letter from Masanjia, talks to the audience during a video conference.

The documentary candidly recorded Falun Gong practitioner Sun Yi’s imprisonment in the notorious Masanjia labor camp, where he was forced to make cheap Halloween decorations. He hid approximately 20 letters detailing the atrocities committed at Masanjia in the finished packages. Julie Keith, a mother in Oregon, found one of the letters. Her discovery set off a chain of events that led to the shutdown of the entire labor camp system in China. The persecution of Falun Gong didn’t stop, however, and Sun Yi had to escape from China.

Gouit, a member of the audience, said the documentary was “filled with power” and that the entire film had left her with a deep impression. She had heard about human rights violations committed by the CCP but was still shocked by what she had learned at the screening. She said she would share the screening and the film on Facebook to let more people know about the persecution happening in China.

Ishika, a student at McGill, said she was deeply disturbed by the torture scene in the labor camp even though the film producer had used illustrations to describe them. She was saddened to see that Sun Yi and his wife were forced to get a divorce, as well as all the other harm done by the persecution. She said the Chinese Communist Party’s (CCP) violation of human rights was unacceptable and that everyone in the international community should pressure China to stop the persecution.

Michelle, a graduate student, said that the sad experience of Sun Yi and his family was gripping and that the reality presented in the film was very alarming. She realized that the CCP was still persecuting people even after abolishing its labor camp system.

Canadian Falun Gong practitioner Ms. Gao had been imprisoned in the Masanjia Labor Camp when she was in China. She attended the screening and used her personal experience to answer the audience’s questions about Falun Gong and what makes practitioners face such atrocities with bravery.

During the videoconference with director Leon Lee, he asked the audience, “Sun Yi wrote 20 letters. Julie is the only one who made the letter public. If you had received the letter, what would you have done?”

“Three Months in Review: The Spread of Coronavirus from Wuhan to the Rest of China and Other Countries”