Twenty Years of Raising Awareness Across the Globe

(Minghui.org) Chang Shan-he, 76, started practicing Falun Gong in 2000. He retired from his work unit over 20 years ago, and has since been distributing Falun Gong informational materials to people around the world.

He recalled, “I practiced Tai Chi for 25 years in an effort to improve my health. But I still suffered from three illnesses. However, after practicing Falun Gong for a short while, my gout, sore muscles, and cervical osteophytes (bone spurs), all disappeared. That's when I decided to stop practicing Tai Chi!

“It took me six months to read Zhuan Falun (the main book of Falun Gong). On my first read, I surmised that the book was teaching people how to be good and kind. It wasn't until later on that I discovered that the book was actually disclosing the meaning of life to me, as well as the true purpose of human existence!”

When Chang learned that he had met the minimum requirements to apply for retirement—which was right after his first year of practicing Falun Gong—he thought, “Falun Dafa is so good! If I apply for retirement, I'll receive monthly pension checks which will enable me to participate in experience sharing conferences, clarify the truth, and help people understand the beauty of Falun Gong!”

With his family's support, Chang used a large portion of his monthly pension checks to purchase truth-clarification materials, such as DVDs, fliers, newspapers, booklets, and bookmarks.

“Most people would be very appreciative if their family doctor was able to cure them of their illnesses,” said Chang. “Practicing Falun Gong enables me to not only become a better person, but also to be illness free. So, of course, my appreciation is beyond words!”

“In addition, I take money lightly and use it to introduce the spiritual practice to as many people as I can. It's such a great thing to do.” 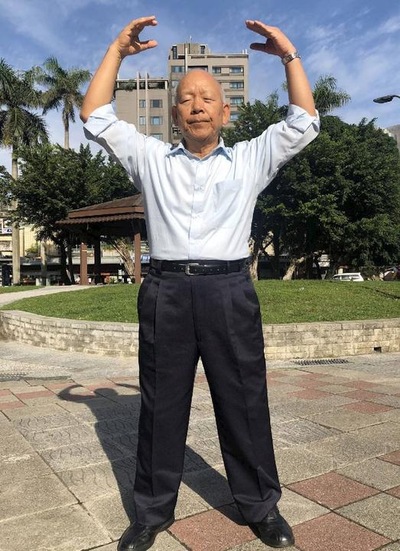 Chang Shan-he performing one of the Falun Gong exercises.

“I take every opportunity to introduce Falun Gong to the people I meet,” said Chang.

“Master Li said that each person we meet is a predestined relationship, so it's important to let them know about Falun Gong and the ongoing persecution in China. This is what that person has been waiting ages to hear.”

It's not easy to greet strangers and then start talking to them about Falun Gong. “When I first started telling people about the practice, I was not very good at it. I thus often felt embarrassed when I met with rejection.”

Then Chang thought, “What I'm doing is the most righteous thing in the world. Therefore, there is absolutely nothing to fear!” With solid righteous thoughts, all of his self-consciousnesses and fear disappeared.

Since he regularly travels across the world telling people about Falun Gong, he inevitably meets people who speak different languages.

“I would ask local practitioners to teach me how to greet people in their native languages,” explained Chang. “When people hear me greeting them in their local dialect, they look both surprised and happy, and they are much more apt to accept my fliers and learn the truth about Falun Gong.”

“My heart is different from that of ordinary people,” said Chang. “When I arrived at the Louvre Museum in Paris, I realized that some practitioners were very busy, while others lacked the financial resources to pay for Dafa-related fliers and brochures.

“Since I have both a pension and time, I was able to distribute newspapers, play the drums in local Falun Gong parades, participate in different Dafa-related exhibitions, and generally help out wherever and whenever I was needed. This is exactly what I have been doing for the past 20 years.

“I would sometimes stand in front of Falun Gong poster boards, and noticed that some Chinese tourists were afraid to accept fliers or newspapers from us.”

He thus prepared paper fans during the hot summer months, and gift bags during the Chinese New Year. When he hands them out to Chinese tourists, they are surprised and delighted.

When he meets children, he gives them toys that fellow practitioners no longer need, and Dafa-related materials to their parents. Both the adults and children really like Chang!

“Reflecting on the Chinese Communist Party Virus: When Principles Are Neglected, Problems Will Arise”