(Minghui.org) The annual San Sebastian Festival for Children, delayed this year due to the earthquake that surprised the island in early January, once again delighted families with its traditional music, dance, crafts, food, and, especially for children, handcrafts, theater, and story-telling.

Falun Dafa practitioners had a booth at the festival this year, where they introduced the practice and also raised awareness about the nearly 21-year persecution of this practice in China. Visitors expressed their surprise upon finding an ancient practice of spiritual perfection at the festival. They stopped to read the displays, watch the exercise demonstrations, and talk to the practitioners. “What is Falun Dafa?” they asked, “and what has this to do with torture and organs?” As the practitioners explained, they noticed that many were silent and incredulous upon learning of the brutalities taking place in China. Some took photos of the exhibits and others asked for more details – they wanted to better understand what they had been reading.

As the practitioners relayed the facts—that for more than 20 years, some 100 million practitioners of Falun Dafa, a peaceful meditation practice based on Truthfulness, Compassion, and Forbearance, have refused to renounce their faith, and as a result the Chinese Communist Party (CCP) has persecuted them in a multitude of ways, including removing their organs against their will for profitable sale by this very government. This moved many to show their admiration and express their desire to support what the practitioners were doing. The practitioners saw people visibly struggle to come to grips with such an atrocity, aghast that it continues in China to this very day. 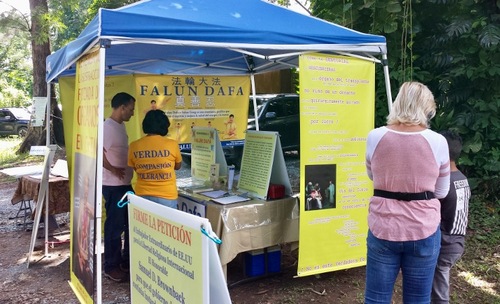 Some responded that they knew about organ trafficking and that it was now happening in many countries. When the practitioners clarified that in China the government is responsible for this atrocity, as part of its systematic persecution of all faiths, their faces expressed alarm. One lady thought for a while, and then said, “…and look at what’s happening in China now… with this new virus!”

As visitors moved through the exhibits, they also learned about the U.S. Ambassador at Large for International Religious Freedom, the Honorable Samuel D. Brownback, and read his declaration to the Chinese communist regime: “You will not win your war on faith.” Many carefully read the petition to the Honorable Ambassador and signed it. 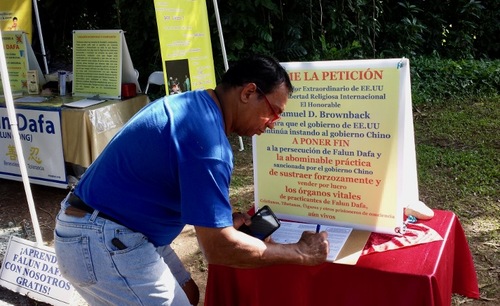 Without hesitation a visitor signs the petition to the Honorable Samuel D. Brownback, U.S. Ambassador at Large for International Religious Freedom. 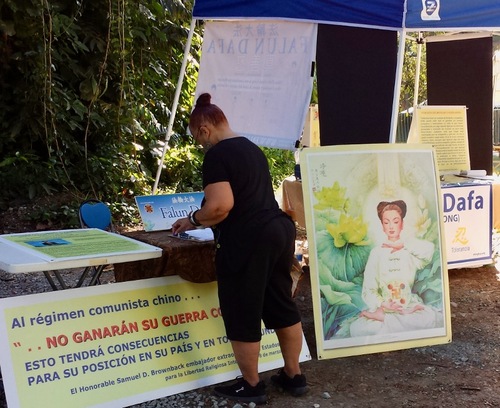 A visitor signs the petition after reading the exhibits.

One woman stopped and examined the displays with curiosity. When she learned that she had found a spiritual practice, with its book Zhuan Falun that she could download for free, and that she could meet with other students and learn, she was elated. “Imagine what I found just walking by here!” she said.

After signing the petition, she welcomed the opportunity to try one of the exercises. When she finished the Falun Standing Stance exercise, she was smiling and radiant. When asked how she felt, she could not speak for a few seconds, and then said, “My feet were about to leave the ground!” 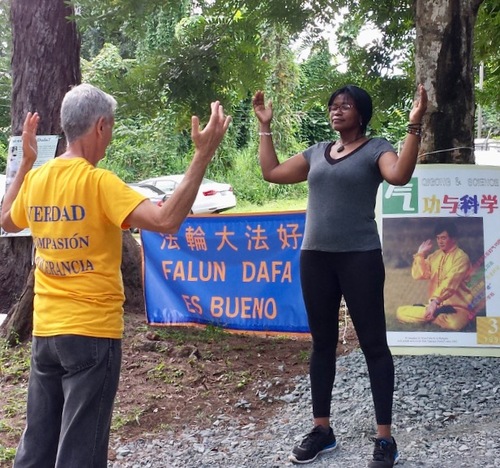 Doing the Falun Standing Stance exercise: “I felt that my feet were about to leave the ground!”

A man who said that he was a nurse and had explored many spiritual practices was shocked as he read about the Chinese regime's forced organ harvesting of prisoners of conscience. He worked through the exhibits and was interested in the DAFOH (Doctors Against Forced Organ Harvesting) brochure. He also wanted to experience the exercises. After finishing the Falun Standing Stance, he said thoughtfully, “I feel very calm… this is profound.” 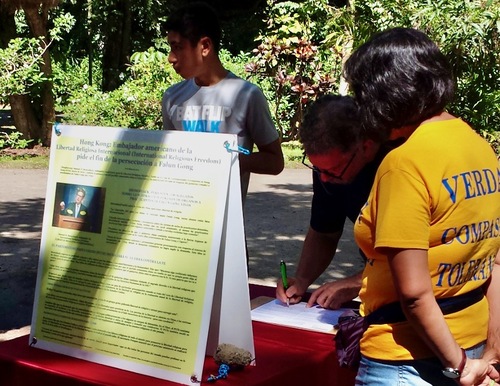 A nurse signs the petition to the Honorable Samuel D. Brownback.

Several visitors expressed their appreciation for what the practitioners were doing. This was most visitors’ first encounter with Falun Dafa and the persecution. It was also the first time they had heard of the persecution of all beliefs in China, and of forced organ harvesting from living Falun Dafa practitioners by the Chinese communist government. During conversations practitioners noted that quite a few people were pleased to learn that the U.S. has been actively condemning the Chinese communist regime’s atrocities for some 20 years, and that the U.S. has an Ambassador for International Religious Freedom.

“Inspired by Minghui Editor’s Note in a Sharing Article”