(Minghui.org) Falun Dafa practitioners in Los Angeles held a series of activities on March 7, 2020, in the busy city of San Gabriele, where many Chinese people live.

They introduced the beauty of Falun Dafa to people and talked to passersby about the crimes that Jiang Zemin, the former head of the Chinese Communist Party (CCP), has instigated during the CCP's persecution of Falun Dafa. They explained current events to help people clearly see the vicious nature of the CCP, and advised Chinese people to withdraw from the CCP and its affiliated organizations. 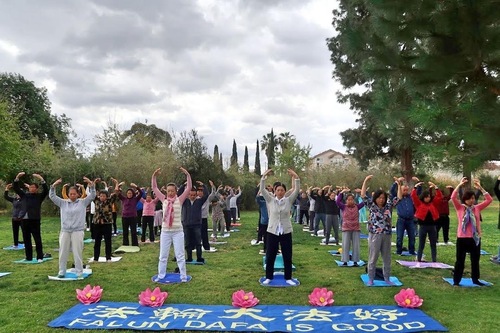 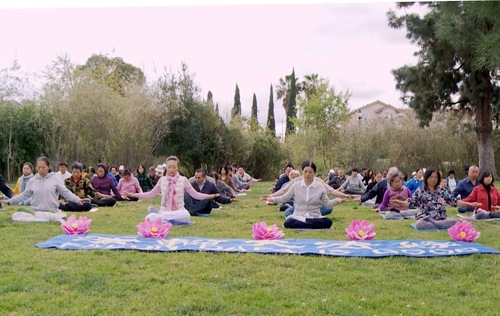 Falun Dafa practitioners do the exercises in Vincent Lugo Park in the morning. 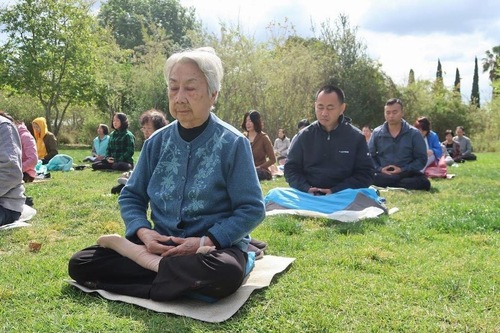 Ms. Ren lives in the city of San Gabriele. She has been practicing Falun Dafa for almost 20 years and goes to a park to practice the Falun Dafa exercises almost every day. “My health was poor in the past,” she said. “But after I starting practicing Falun Dafa, all of my ailments disappeared. Even the doctors found it hard to believe.”

She said that although she was already 92 years old, she is very healthy. She doesn't have any illnesses and has no need to see a doctor. “I get up early every day to practice the Falun Dafa exercises,” she said.

Awakening People so They Distance Themselves from the CCP 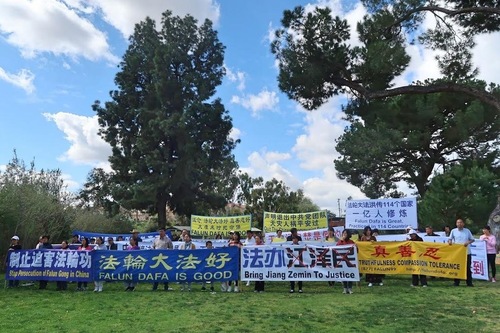 After practicing the Falun Dafa exercises, practitioners held a rally to expose the CCP's evil nature and awaken people who thought that China was “better” now.

Ms. Helen Li, director of the Quitting the CCP Service Center of Los Angeles, spoke during the rally.

Ms. Li pointed out, “This is the tremendous crime that Jiang Zemin committed. If the persecution had not happened, many people would have started practicing Falun Dafa and would have improved their health and been following the principles of Truthfulness-Compassion-Forbearance. During this pandemic, many people would have then had very strong immune systems and stayed safe. The coronavirus would not have taken so many people's lives.”

Ms. Li also said that the CCP's propaganda about the epidemic had caused the epidemic to grow out of control and then spread to the entire world, resulting in global panic. What the CCP has done shows that the CCP is a virus for humankind.

“It is very important for Chinese people to withdraw from the CCP and its affiliated organizations. Withdrawing from the CCP will help one stay away from the virus and protect oneself,” she said.

Ms. Silvie was taking a walk with her family in the park. She was very interested when she saw practitioners doing the sitting meditation. “I also meditate at home,” she said. “But they [practitioners] look so peaceful and calm.”

She took some information about Falun Dafa and said she wanted to find some time to learn it.

Patrick from Taiwan said that he came to the park every day to walk his dog. “I always see them practicing here in the morning. They usually have four or five people, and today they have more people. I have some friends who practice Falun Dafa as well. They are nice people,” he said.

Forming a Great Wall of Truth to Awaken People 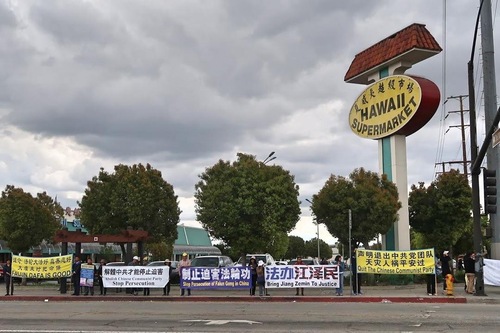 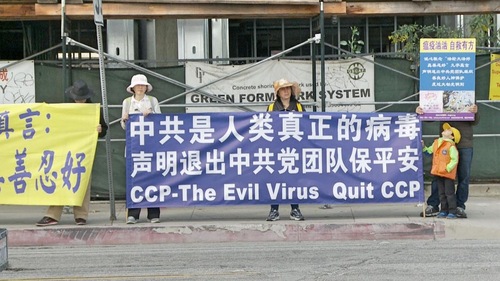 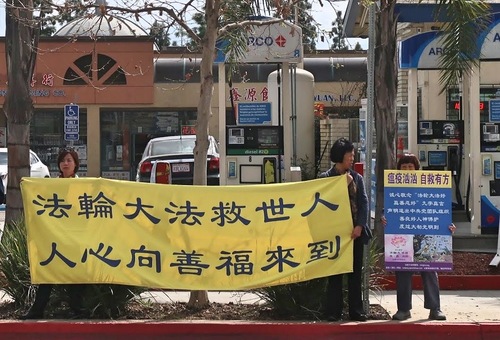 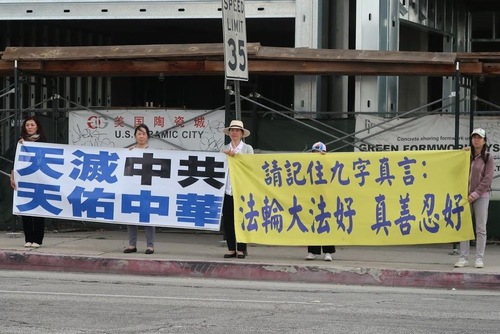 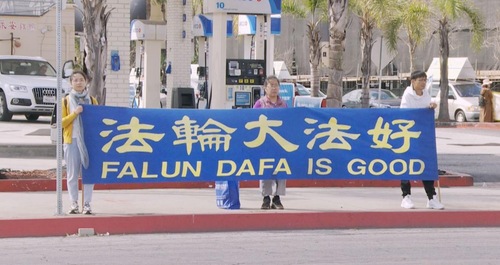 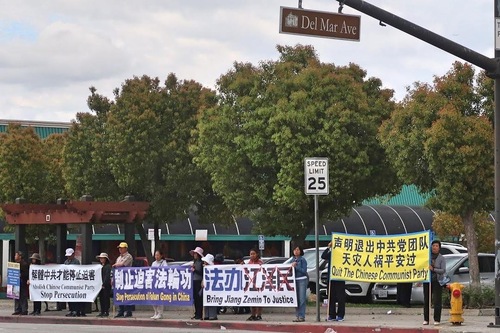 After the rally, practitioners formed a “great wall” at the intersection of Valley Boulevard and Del Mar Avenue, where many Chinese people run businesses.

Practitioners held banners with messages written on them, such as, “The CCP is the True Virus of Humankind,” “Falun Dafa is Good, Truthfulness-Compassion-Forbearance is Good,” “Disintegrate the CCP and Stop the Persecution.”

Practitioners hoped to use these banners to awaken people and help them understand that the world needs Truthfulness-Compassion-Forbearance, that the rouge CCP regime is not the same as China the nation, and that China would still exist without the CCP. 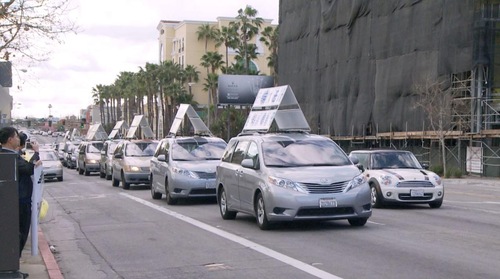 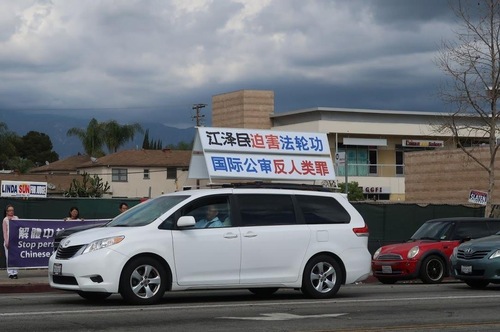 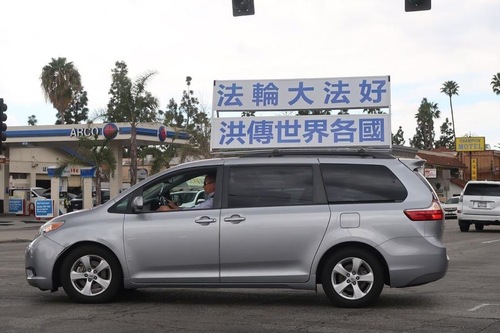 Some practitioners drove in a group on Valley Boulevard back and forth to spread the facts, attracting people's attention.

Mr. Hanson is originally from Indonesia and has lived in the U.S. for more than 20 years. He took pictures of the practitioners with his cell phone and said he would send the photos to his relatives in Indonesia. He told the practitioners that he didn't know anyone who was a practitioner, but he knew that the communist regime persecutes human rights and restricts freedom of speech.

“The Challenges I Encountered during the Pandemic Exposed My Attachments”